The fan on my NUC7i5BNH ROCK server appears to be dying - it’s making more of a whine/rattle than a purr and no amount of blowing makes it much better. I’m wondering if anyone has any recommendations from experience for improved (quieter/longer lasting) aftermarket fans and thermal compounds?

The other option might be an Alaska Newton S7 case which would at least avoid a repeat but takes up more space. I’m also a bit intimidated by the fiddly nature of taking it all apart but I know there’s some good guides around to help. Any thoughts welcome - thanks!

Why not the Plato X7?

No matter what you choose, make sure it can fit all the drives you need inside.

probably better to go for a fanless chassis to be brutally honest. maybe you could find a new/or spare on eBay perhaps but its only going to come back again sooner or later. I went fanless with the Plato X7 even tho its a bit under spec for my 7i7BNH but its been running for more than 2 years this way and no issues…room is only using A/C maybe 40% of the time and ROCK is used for the OS. An SSD for local storage is also inside.
No regrets. I keep the old parts for possible reassembly and selling or redeployment.

Thanks guys - fanless does seem like it’s probably the best bet.

Why not the Plato X7?

Only because it’s larger and as currently configured I don’t have much space - is there a reason for your preference there? More drives?

If you need a replacement fan for your NUC, here’s what to buy!

You will have to ask Akasa to confirm, but I suspect the Plato dissipates heat better than the Newton because of the NUC Chassis compatibility list (now for their Dawson Canyon successors only - Plato X7D but not Newton S7D for NUC7i7DNBE).

Ah, that makes sense, thanks @wklie…I may have to do some rearranging! And thanks for the link too @Rugby - I had come across it but was just interested in any ‘real’ user experience of different fan options - I think the reality though is there aren’t all that many and I’m underwhelmed with the existing fan only lasting c. 2 years.

Mine have lasted much longer. I think you might have just gotten “the luck of the draw”. so to speak.

You will have to ask Akasa to confirm, but I suspect the Plato dissipates heat better than the Newton

You are (as ever!) correct - thanks. I suspect I’ll bite the bullet, given that I have to take half of it apart in any case to replace the fan.

I think you might have just gotten “the luck of the draw”. so to speak.

I think you’re probably right…I’ve had a hunch that it wasn’t as quiet as it should be for a while. Technically it’s still in warranty but I can’t face either the hassle of sending it back and being without it or the knowledge that it may then recur.

The Newton case never was supported for an 7i7 NUC - precisely because Akasa couldn’t guarantee the heat dissipation. However, the OP has a 7i5 NUC, which is fine for the Newton style of case. My 7i5 has been happily sitting in its Newton case for a couple of years now.

I think both statements are correct - the Newton is indeed fine for the 7i5 but Akasa have confirmed to me that the Plato X7 gives better heat dissipation. Whether or not that’s needed is of course debatable but I may as well go that route (neither case will really fit in the existing space!).

Would be very grateful for some direction here! I’m halfway through this build but the chipset seems to be in 3 pieces, not the two shown on the Akasa instructions. Since I only have 1 thermal pad included with the kit, am I just meant to use paste on the other chip? It had a pad to start with. Help! Am suddenly in over my depth!

Thanks for any guidance. 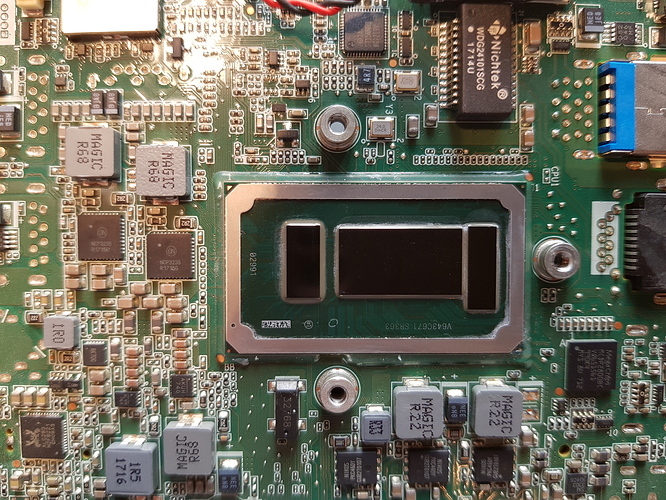 Edit: So, I just went for it with the thermal paste in the end! In a few hours time I’ll know if that was a mistake or not

Well, I would have stopped and gotten in touch with Akasa; because the cost of being wrong could be loss of the whole motherboard.

I could be reading it wrong but Item 2 on the “included list” seems to indicate that there should have been a second pad; and it suggests that in step 2 of the installation guide. 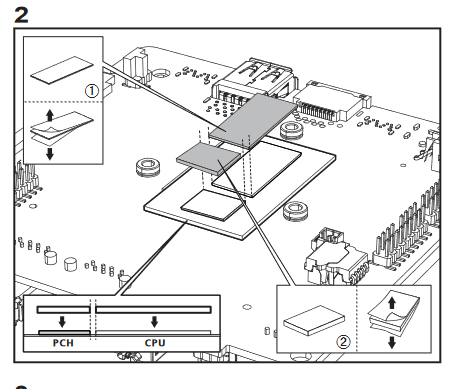 Unfortunately those instructions are out of date anyway as they don’t refer to the thermal paste - the current version clearly identifies 1 pad + paste. To add to the confusion, the Akasa video for the NUC8, which they sent me initially, just uses paste across all 3 chips! I’ve emailed them as well so will get an official answer. However, in the meantime the CPU temp was 40 degrees after 30 mins upsampling to DSD128 across 2 zones so I’m hoping I made the right call - the speed indicator is also the same as it was before the update so no evidence of thermal throttling.

BTW for the benefit of others, don’t attempt this without a decent thermal pad/paste solvent - I used the Arctic Silver one.

Okay! It sounds like it is working. I would keep tabs on the temp for the first month, I’m paranoid, before sinking back to a “set it forget it” mentality.

It sucks when companies keep out of date instructions around on their website.

Yeah, thanks, makes me a bit uneasy too - I’ll feel more comfortable when I hear back from them to confirm. Clearly the graphics could do with updating in their instructions but at least the latest instructions reference the paste.

For the benefit of others, Akasa have confirmed that my approach above was correct. They also provided a link to a helpful blog which I wish I’d seen beforehand!