Ripped files not showing up

Ripped about 30 CDs. They appear in the directory. Roon fails to see and add them!
Rescanned. Reset the pah. Rescanned again. Looked in hidden files. Looked in skipped files. No joy!! Unhappy! 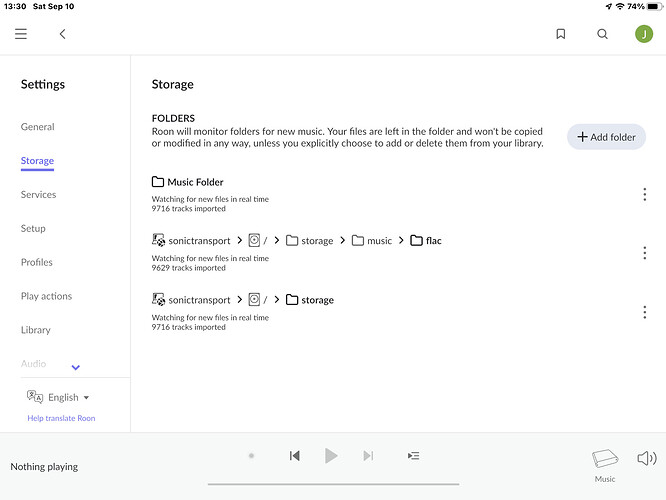 Adding Folders When configuring your Roon Core, you'll need to set up your Watched Folders. In some configurations you can use Roon's built-in browser to browse to your music folder and select it. However, when setting up your Roon Core from a Remote...

Just in case: There is no support in Roon for WMA.

Sorry, but I’m confused about your storage settings in that screenshot.

I’ve had this problem too the last couple days. Ripped a couple CDs to a watched folder and they didn’t appear. Did a force rescan-no help. Shut Roon down and reopened and there they were. I’m on a Mac.

I only added the new path after nothing else was working.

Somewhat irritated. I will delete the additional folder and let you know.

Tried all that too, including unplugging the core - no joy.

not from a remote

I will delete the additional folder and let you know.

Now:
Ripped + 30 albums
The storage path is correct.
The ripping software recognized the albums and track.
Tracks and albums appear in storage
Tracks and albums play back from storage on windows media
NOTHING APPEARS IN ROON.

All prior tracks and music are available in Roon.

I have reached the end of my patience. The loss of this functionality
makes this software useless to me.

I have had no support from Roon to resolve this.

Yes, I’ve had that same problem, even with a forced scan. Eventually, they show up with me doing nothing else… Mystifying

I have had no support from Roon to resolve this.

You only reported this 2 days ago and support doesn’t work weekends.

I’m sorry, what NAS is this? I thought your Core and your music was on the SonicTransporter?

If this is the case, then Roon’s Settings > Storage screen should contain a single entry: the Music folder.

These 30 ripped CDs - they were ripped on the SonicTransporter, or elsewhere? They are new albums, not additional versions of albums that were already in your Roon library?

I called SonicTransporter a NAS. There is only a single entry “Music Folder”.

@agillis - this is a strange one; albums ripped on a SonicTransporter with a Roon Core are not showing up in the library. Have you any thoughts on what might be happening here? Thanks in advance.

I don’t I would need to work with you directly to determine the cause. Can you go to smallgreencomputer.com and click on contact us to submit a support ticket.

@John_Hooley - could you please take up Andrew’s suggestion and raise a support ticket with SmallGreenComputer? Let’s explore that avenue and hope it can shed some light on your issue. Thanks.

Oh, and I assume that you have tried rebooting the SonicTransporter or restarting the Roon Server running on it?

Under “Setup” searched for Roon Core with no result.

This is to be expected. It’s searching, not for a Roon Core, but for a device on your network running the Roon Operating System (which would then have a Roon Core on it).

You don’t have a device that is running the Roon Operating System - you have a SonicTransporter that runs Linux. Only the Nucleus, Nucleus+ or a NUC with ROCK installed run the Roon operating system.

What kind of file formats are you trying to import into Roon? Are they files with DRM perhaps? Can you upload one of the affected albums here and let us know once uploaded? Thanks!

He ripped CDs…there is no DRM.