I figured out the issue with my vinyl rips. However, I am now experiencing major problems with Roon:

Please advise as what to do. I am including screen shots that illustrate all of this, including the log indicating no issues.

Ii was going to spend the entire afternoon ripping additional CD’s today, but can’t move forward until this gets ironed out! 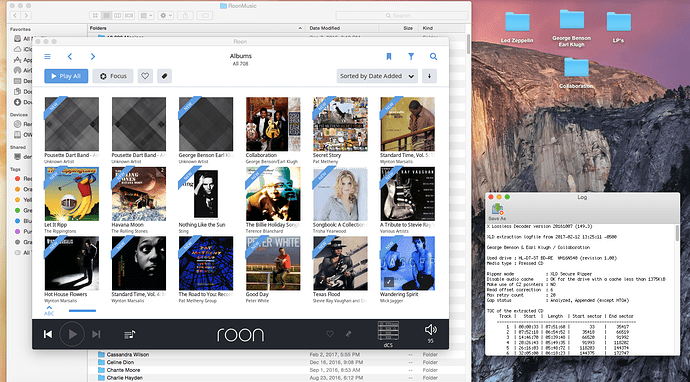 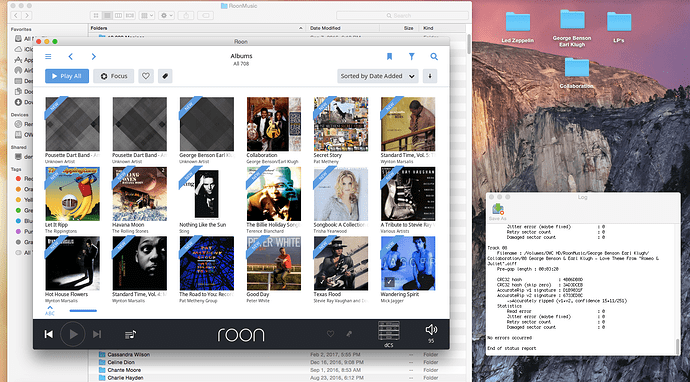 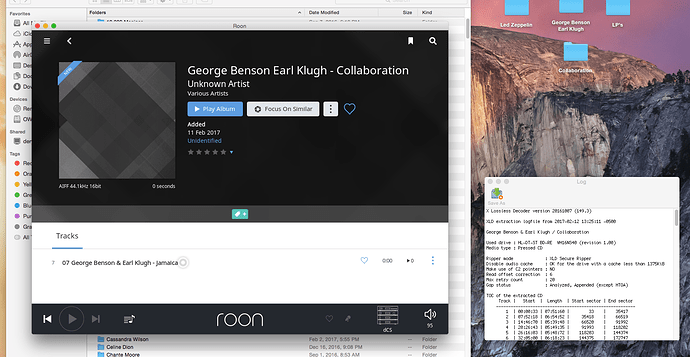 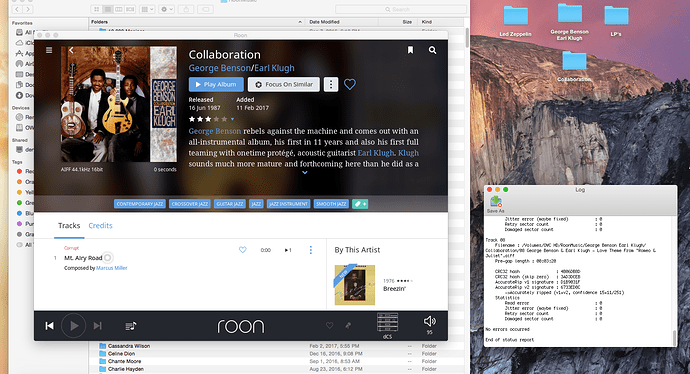 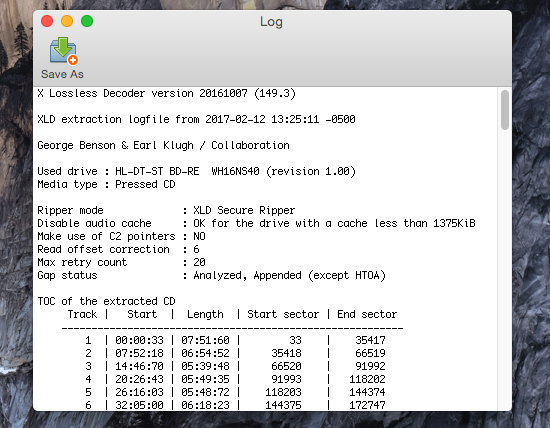 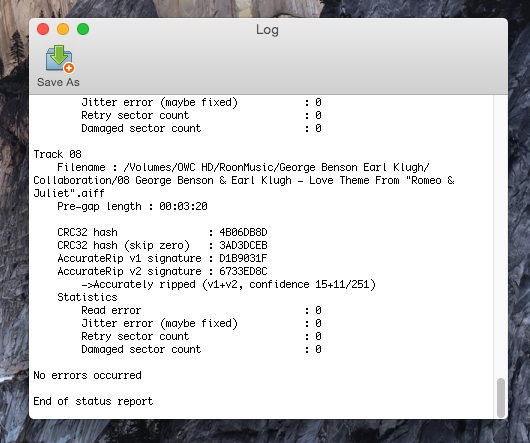 Try that first and see if they are corrupt after starting Roon. We can address the duplicates issue after.

I just deleted the corrupt album/files from Roon and my USB 3.0 local drive based directory. I then quit Roon and ripped 3 CD’s into clean directory folders. I checked the XLD log for each to ensure there were no ripping errors. All 3 CD’s ripped bit-perfect with no errors. I restarted Roon and all 3 CD’s came up duplicate, with incomplete tracks and one of the 2 in each case with corrupt files!

I really need to get on toward getting my last ~150 CD’s ripped, had planned on spending 5 - 6 hours doing that yesterday, but obviously can’t make any progress with these issues!

A couple of questions:

I believe the duplicates issue is fairly easy to solve with Merge Albums, but lets make sure everything is getting imported properly.

Yes, the 3 CD’s are among the 5 I have had these issues with, however, I was very careful to delete all files associated with these CD’s from both Roon and my album library/directory on my local SSD before this most recent attempt to rip them into Roon again. 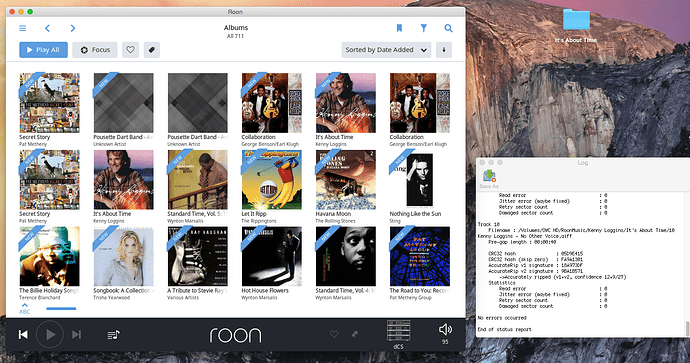 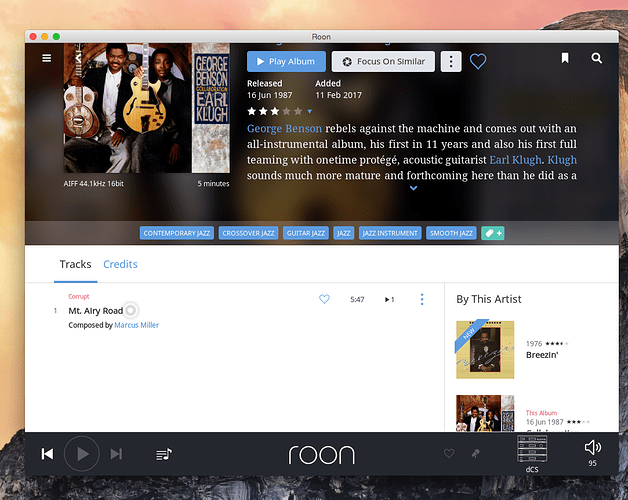 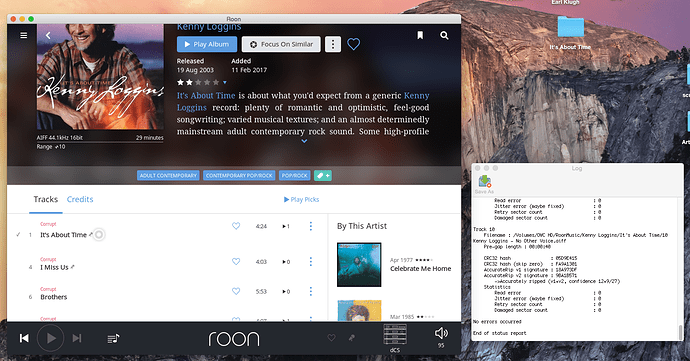 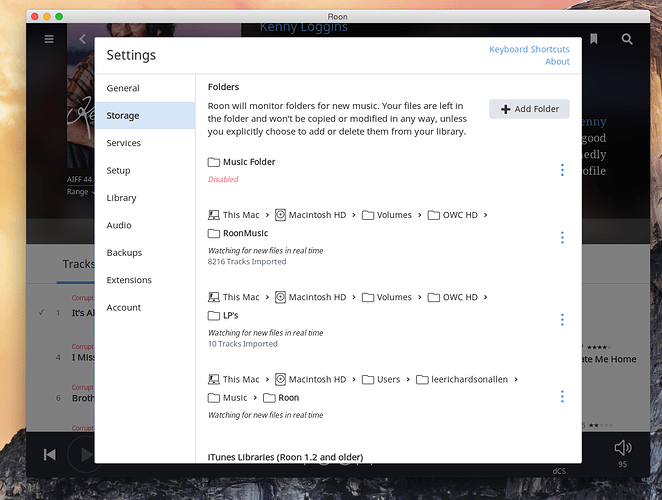 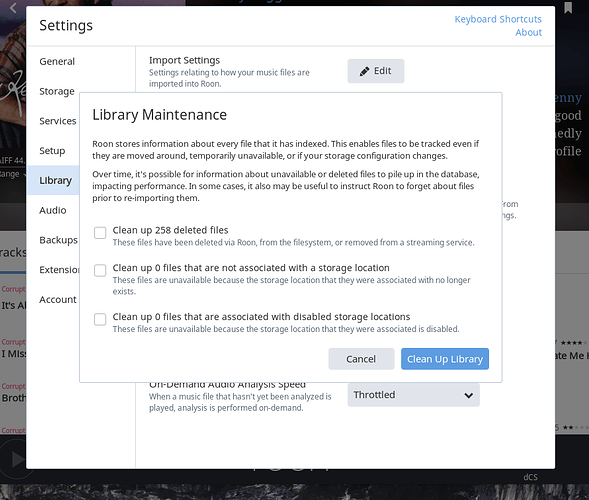 Ok, could you shut down Roon and delete the Kenny Loggins album (let’s focus on this album) from the music folder?

Then go into Roon and then to Settings > Library > Clean Up Library and clean up any files that are showing.

The KL album came into Roon as a single album, but without album art (which was present when ripped) and with skipped, corrupt tracks, as indicated by the screen shot. I did not shut Roon down before ripping it as that was not in your directions. 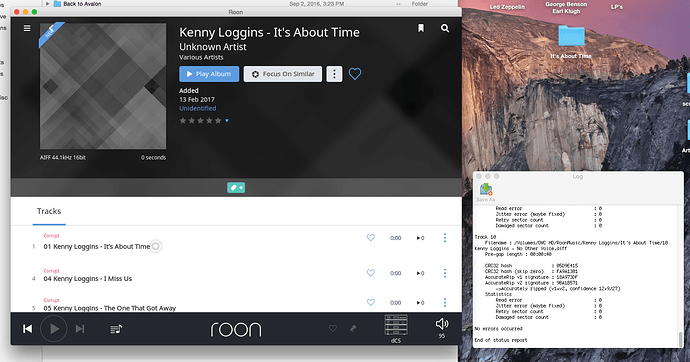 One additional tidbit of info–my Mac Mini is a dedicated server. I don’t use it for any other purpose, so there are no additional apps on it beyond what comes on the Mac, Roon, XLD and the utility software that came with my backup Western Digital HD. I have not been on the Internet via this machine in months other than to log into Room Community to post the screen shots to you.

Sorry yes, Roon should be shut down for the ripping.

Could you try again?

Deleted the last version from watched Roon music folder, shut down Roon, ripped the CD, opened Roon. Came in this time as single album, with cover art, but tracks 7 - 10 are corrupt! 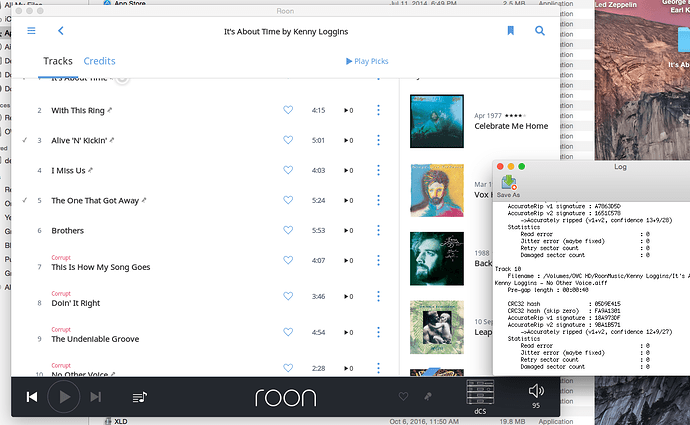 I moved this conversation into a new support topic.

It looks like we are making progress, but I’m unsure how to proceed.

I’m going to call on @support to help us out. Support, shouldn’t these corrupt files be in Skipped Files area of Settings > Library?

I appreciate your help, you have been great. Isn’t this reflective of issues with 1.3? I did import ~40 CD’s after updating to 1.3 without issue, but I never saw these issues in 1.2. Honestly, wish I had just continued to complete ripping my library into 1.2. In that case, I would not have wasted these last 4 hours on this stuff, and would be much closer to getting the rest of my content into my library!

I’m going to call on @support to help us out. Support, shouldn’t these corrupt files be in Skipped Files area of Settings > Library?

No, because they weren’t skipped–they were imported!

They were found to be corrupt later, probably during audio-analysis. If you “re-analyze” these files, and they’re not really corrupt, it will clear the corrupt flag.

What happens if you select the files and then “re-analyze”? I bet it clears the corrupt flag…

@ben has been working on a solution to this to stop it from happening in the first place–it results from Roon trying to import the files before they’re fully copied.

So, as @brian indicated, could you re-analyze the album and see if that fixes the corruption?

Let me know if that works.

However, is there a way for me to delete 1.3 and download 1.2? I would prefer not to have to go into every CD rip/import and manually fix these track issues. I appreciate it was not your fault/call, but it is clear that 1.3 was put out prematurely. Greg’s comments that this is a known problem in the process of being addressed bears that out. For Roon to corrupt tracks while importing perfectly sound CD files is a very fundamental problem!

So we shouldn’t be adding new music to a watched folder with Roon running? I’m not ripping directly to the watched folder but I am copying new files in constantly with Roon Core running. In fact I’m listening to music as I’m doing this.