Ah yes in the KB…

In Singapore if I buy locally its the equivalent of US640 (S$888) just for the bare bones NUC OUCH - so Amazon its going to be I think for the NUC … Ram and M.2 disk is about on par…

BUT its seems to be impossible to find an M.2 SSD locally smaller than 128GB so I hope there is no issue using that - can’t see one IMHO.

BUT its seems to be impossible to find an M.2 SSD locally smaller than 128GB so I hope there is no issue using that - can’t see one IMHO.

Same here in the Netherlands - and the Transcend model recommended by Danny is not readily available. However, the text in the Roon KB implies that there shouldn’t be an issue using a larger alternative:

The SSD can be 64GB or larger – note that larger SSDs tend to be faster due to how the chips are laid out (after 256GB, it doesn’t matter… for now). It is extremely rare you will need more than 64GB of storage on this SSD. ROCK will not use it.

I managed to source anther supplier for the nuc at around $580USD but still looking at the NUC specs its a good deal slower than my i7-7700 Win10pro setup so I will probably not jump in just yet but look at it for client installs where Roon is the best library system for them.

Maybe I’ll just update a SFF chassis with a basic mobo for the now idle i5-6500 chip and play with a Linux server install with some RPi endpoints - that will be fun.

I still think the Nucleus will be a big hit too…but the links in the KB seem to be 404 so not able to get a decent look at it for a purchase option as yet.

Maybe I’ll just update a SFF chassis with a basic mobo for the now idle i5-6500 chip and play with a Linux server install with some RPi endpoints - that will be fun.

Look at Asrock DeskMini 110 which is a case+motherboard+power brick. it will work with your i5-6500.
I have recently bought one for desktop use. It is not that much bigger than a NUC.
I am using a i5-7600 with intel stock cooler running at 1000rmp (set to silent in the BIOS). It is very more silent than a NUC and it does not use more power (13W idle) than the new i7 NUC and much it is faster 4 real cores.

Yes I have a SFF chassis already so just need the mobo and ram and maybe consider M.2 instead of SATA SSD. Just built 3 for a client too - I prefer to stick with a replaceable mobo option. AS the Roon builds are all basically capable of the same feature set (a testament to the Roon team) one just has to spec the solution to their needs.

@danny Seems that trying to find 64GB M.2 SSD options for ROCK is impossible now perhaps outside of the Amazon link. The smallest I can find in Singapore is 240GB and even these are low stock items as most are in the 512/1TB sizes now. And that is coming from the Transcend distributor/importer here.

While its not an issue to go bigger I am sure, but if this is a trend worldwide that as these smaller SSD size supplies are drying up its going start jacking up the cost of the Nucleus too eventually unless the prices for the larger formats are falling faster than the stocks are declining.

Even on Amazon its indicating “Usually ships within 2 to 3 weeks.”

Seems that trying to find 64GB M.2 SSD options for ROCK is impossible now perhaps outside of the Amazon link

Yah, I see the issue… 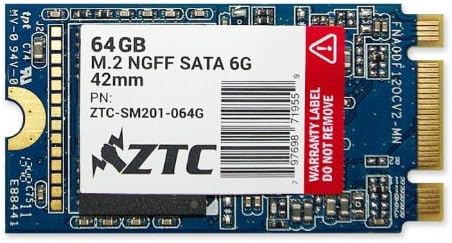 that SSD is cheap (although not as cheap as the Transcend), and available.

its going start jacking up the cost of the Nucleus

We buy in bulk, so we are given slightly lower prices, but more importantly we are given availability. When the 64GB sticks run out, the 128GB will be the same price… and onwards… the BoM of Nucleus should stay stable.

The bigger issue for those of us outside the USA are shipping/duty cost and delay plus warranty returns.

Anyway as long as bigger is not an issue I guess its just some incremental costs that bring the DIY effort closer to the Nucleus in terms of price…albeit a marginal difference.

Local price for the NUC7i7BNH with 240GB Ssd and 8GB ram ~US$693 - probably still cheaper than my i7-7700 silent PC with W10Pro and I would hope as fast for Roon perhaps without the DSD512 up sampling.