Hi All,
I’ve changed my Roon eco-system architecture a few days ago: I have moved the Intel I5Nuc8 with ROCK away from the DAC and I’ve bought a SoTM SMS 200 placed in between ROCK and USB DAC (ADI DAC " by RME); library in on USB 3.0 disk attached to NUC, asd before.
The problem is that Processing Speed collpased form 9x to 5x for the same path, i.e. DSD128 upsampling.
Is there a reason for this performance decrease?

Any help or suggestion?

I was just curious, are you sure you tested with the same source file?
As you most likely already have seen, the processing speed differs with various sample rates of the source file also. And also between dir´fferent endpoints, but your figures seem a bit to various.

Then i don’t know why the sMS-200 would cause the Roon Server to behave differently.

Do you have any other Roon Bridge that can be used as a comparison? I’m thinking along the lines of the Core needing to package the stream into different packages when ethernet/WLAN becomes part of the path.

Whats your setting for buffering in Eunhasu-Roon Settings?

Ethernet has been part of the equation in a previous setting, where files were on My Nas and speed was higher, around8x, considering similar CPU effort.

Good point in checking Eunhasu settings. Later this evening I’ll take a look and report back.

library in on USB 3.0 disk attached to NUC, asd before.

I understood it as media was stored on an external USB, in both situations?
Still, interesting to see what the Eunhasu setting are

Just to be sure: the files are all analysed by Roon already, there is no background work (analysis or backup) going on?

Yes, all file analysed and no background work. same library as before (give or take some albums, mostly on Tidal)

Very strange. I have no idea, how the processing could be affected if the signal path in Roon between file and the endpoint is the same.
The only difference is that it now needs to be packaged in RAAT, but that should not have such an impact on processing speed (I assume). My limited knowledge ends here…

now needs to be packaged in RAAT

Yes, but RAAT is used internally within the Core and Bridge functions of the Server package, if i’m not mistaken.

If you where going from core to DAC via USB then yes you will get faster speed than over network. Networking has overheads that will come into play as also the different os on the device will equally add some differences. Nothing to really worry about.

I am interested in if it sounds any better from the sotm than direct attached to the core as I have found the RME pretty impervious to noise over USB.

If it’s direct attached to the core it’s not using RAAT only USB audio.

Hi Chaps, You are both correct these days RAAT is also used by Roon internally it is now part of the application’s architecture. However, in this case the discussion was about Airplay vs. TOSlink (SPDIF) … the former is a network protocol (for data) the later is not, it’s a bitstream to a DAC when the the timing of the stream can’t be governed by the clocks in the DAC. So whilst RAAT is the internally within Roon it is used in quite a different context. Those posts are referring to USB DAC…

So it’s always RAAT.
Thanks for digging this up.

Interesting learn something new, but it’s not using the network translation side which will have an overhead and latency compared to converting to usb audio to the DAC.

hi,
the improvement gained by moving Core away and using SoTM instead is, IMHO, huge and very well over the sheer cost of the NAA, bought used with 350€… I also used to have a linear psu gathering dust (teradak 9v) so I have also a cleaner power source than the supplied walwart.

As soon as I can (damned real life!) I’ll try to use the backup library on a NAS, just to rule USB related issues out.
The only culprit I can think of is the network but I doubt that this alone could halve the processing speed of a quad core 3GHz+ intel CPU

I got curious and tried this out on two of my Roon Servers, first a ROCK OS install; 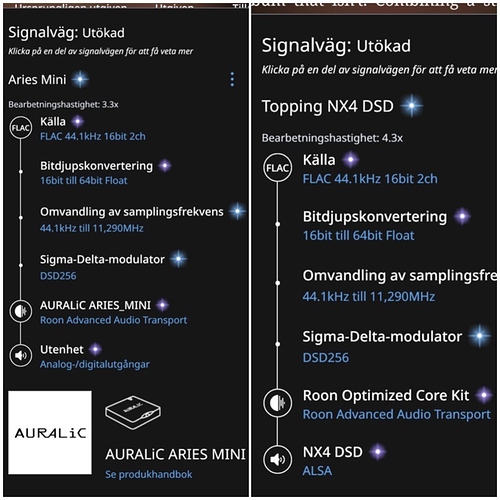 However, i did the same test on my Win 10 (Build 2004) Roon Core also, and there the difference between a networked endpoint and a USB-attached one is slight, if any. And also, the networked Bridge seems to load the Core slightly less? 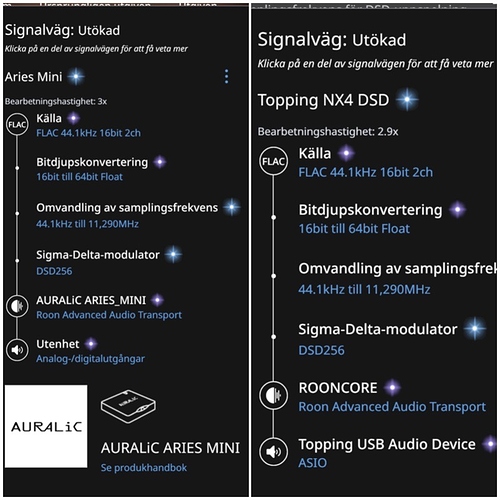