Why on earth did you guys decide to release it just before the latest Katzenjammer album “The Gearbox Sessions” was made available for download? I’m now having to wait for Roon to rescan the whole library before I can listen properly to it.

Thank goodness I can still import it to Sooloos.

Apart from that, great job Roon! Most impressive is it doesn’t appear to me that you’ve had much sleep since the launch.

How about Synology, specifically the 415+. Likely there are more synology than QNAP users, and the newer synology nas are 64 bit.

Go get it guys!

Likely there are more Synology than QNAP users

Likely there are more QNAP than Synology users

Not available as of 1 minute ago in Apple App Store U.S.?

Ah! Thank you sir! Got it now.

Awesome! What a treat, I came home thinking it would be another two weeks before we saw that!
Downloading as we speak (UK)

Not such a crazy request, but not a simple one either. You’re really requesting 2 things here:

I think we’ll get there in the future and we all want this too. Lots of work to do, but that’s never stopped us before

Thanks for the comments @Spence_Marquart!

Well, what can I say - great update!

Came home and did a quick precautionary backup, followed by an update of RoonServer on OSX, Roon on OSX, then got the message above and downloaded an iPhone (5S) version! No sign of the iPad version yet…

The OSX versions feel faster… much faster, and I’m noticing some nice UI tweaks. It remembered my zone setup perfectly (I only had one!).

You’ve also cleared one of the things that drove me slightly (and inexplicably) crazy - the ‘you haven’t played anything yet’ history warning. Its no more. Gone. Vanished. History opens in a snap! Thank you! I forgot to put it on my 1.2 wish list so its like a bonus present.

The iPhone app is a real treat. Yes, at first glance things are a touch small on the 5S, and the different menu order threw me, but small details. To be able to control things from the phone will be a massive enhancement in our household - taking our remotes from a single dedicated iPad, to three devices. This is really quite significant, especially once we set more than one room up.

Lack of Pi image means I’ll have to save that project for another time, but its exciting to know its there.

Sorry to the few people that have had some issues, but I still think we should let the team turn off their phones, shut down their emails, and head off for a nice long rest. Well, maybe not too long

Amen, Mike. One step at a time. Appreciate all you guys do and looking forward to playing with the new Roon iPhone app when I get home from work today!

I’ve previously been told by Roon that I couldn’t simultaneously send music through the Mac Mini in one room and airplay devices in another. If it can be done then I’d like to know how.

None of my top 3 made it in to this one, but I’m now hoping for the next build. I have a simple “listening room” setup without multiple zones etc, so my top 3 are all related to the actual interface, metadata editing, album art, album grouping etc.

I saw that improved box set handling was mentioned, but I see no further details about this. What are the changes made here?

Edit: and I have just spent 15 seconds with the iPhone remote…looks excellent!

Edit 2: I think I’ve just worked out what the box set improvement is; it’s on the editing side, not on the interface side. Just easier to edit tracks in multiple-disc sets.

Simultaneous is a bit ambiguous here as it could refer to either of two things:

You can send different music (audio streams) to the MacMini zone (now a Core RAAT zone) and any AirPlay zone at the same time. Just select each zone in turn by clicking on the zone icon (between the Signal Path light and volume control on the footer bar), choose the music for that zone and play it.

Zones of the same type can be grouped. Grouped zones can play the same audio stream.

Zones of different types (RAAT, Squeezebox, AirPlay, Meridian) can’t be grouped. There are fundamental differences in the way each of those types of zone implement audio streaming. Maybe one day @brian will figure out how it can be done (it’s not simple) but that is not this day.

Hmmm, the you haven’t played anything yet dialogue box is still driving me mad here even after updating everything.

Looks like some nice improvements with this build but my system has been reduced to a crawl for about 3 hours. It’s constantly indexing small numbers of tracks, finishing, then finding more. It’ll run through the night so hopefully by tomorrow I should be returned to a usable responsiveness.

Got some weird number in the volume slider on both my remote systems, see attached. the iPad reads correctly at 0db. 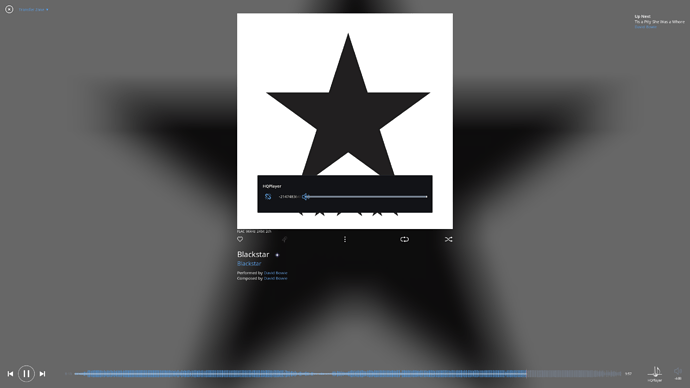 I spent a night with 1.2 at home and I found this is just fantastic. The 1.2 breaks a barrier between network devices and USB devices, 1.2 also removed a boundary between cheap devices and high-end devices. Possibilities are countless!

I also found iPhone version is live in this morning. But I could nothing to do as I was in a train…
I hope your next move would be “Cloud Core” that Roon is able to distribute music everywhere on earth !

Finally got home and played with 1.2 last night. My wishes are fulfilled. Now I can stop worrying about architecture and enjoy the music. Have just downloaded the iphone app but will have to wait to test that - looks awesome. Roon guys - you are an amazing team. The development is swift and well thought out and the response is first class. My congratulations and thanks for all the hard work

Yes, it may well be network congestion. I am able to play 320K MP3 radio smoothly this morning.