I’m using a Cisco SML2008. It is managed, and the LAN port used by the RPI3 with Squeezelite (piCorePlayer) is indicated as a 100FDX Link status. I’m exclusively use Cat 6 or 7 cables.
“Flow control” check boxes are not activated, some reports to set this option ton “on” (a TPLink discussion)…
I’ll do some test this evening with another switch or LAN option (?).

Under multicast setup turn off IGMP snooping under IPV4 and the equivalent setting under IPV6 (can’t remember what it’s called). Check your router as well and turn off multicast / UPnP support.

Also, Roon had to add IPV6 support for 1.3 due to some Apple requirements so I wonder if Roon Bridge is sending out some IPV6 packets that are pissing off the switch / router. This could potentially explain why Squeezelite is working but RoonBridge isn’t.

I’m not very savvy technologically, but with information from above:
I replaced the Netgear GS 716T with in my network (It’s a managed switch) with an 8 port Netgear GST 108, an unmanned switch.
No other changes.
I can now play DSD 128 files and FLAC diff files 192KHz without apparent problems.
I’ll have to leave it to others to work out what parameters have to be configured in smart or managed switches to get Roon 1.3 to function.
Andrew Sew Hoy

I replaced the Netgear GS 716T with in my network (It’s a managed switch) with an 8 port Netgear GST 108, an unmanned switch.

This is very useful information and suggests that the switch (and likely some other device on your network) are conspiring to mess with playback.

Unless you have a need for a managed switch (VLANs or QoS) I would encourage you to dump the GS716 altogether and run with something that’s unmanaged. If the GST108 has enough ports then you’re set, otherwise something like a Cisco SG100-16 works great.

It is possible to configure your GS716 to work, but if you’re not savvy with the ins and outs of layer 2 switching configurations then the easier route is just to run an unmanaged switch.

I guess I’m showing my ignorance but it seems the switch or how the switch is configured is causing the problem, as all I changed is the switch itself (I do realize that weird interactions can occur with software changes) I do not have enough ports on the GST 108, I realize that buying a new 16 port simple switch might be the easiest solution but before abandoning the GS 716T I’d like to know what is entailed to make the managed switch work with Roon 1.3
Thanks
Andrew

Hi, I got some advancement in my investigation thanks to a fine tuning on my Cisco switch.
I’ve reloaded my RPI3 with a Unbuntu server 16.04 armv7 on which I installed Roon 1.3 armv7.

192Khz not playing by default. If I activate on the Cisco switch (SL M2008) the option “Flow control” on the port connected to my router, 192Khz files are working. Great!
The “Flow control” on the LAN port connected to the RPI3 does not seem to change anything.
The JumboFrame option has no effect.
I’m still not understand why the RPI3 LAN port is viewed as a 100Mb/s as the RPI3 comes with a 1Gb/s LAN port.
The other good news is that DSD128 is now working too

Hope this help, but this “Flow control” option is something already suggested in an another thread. 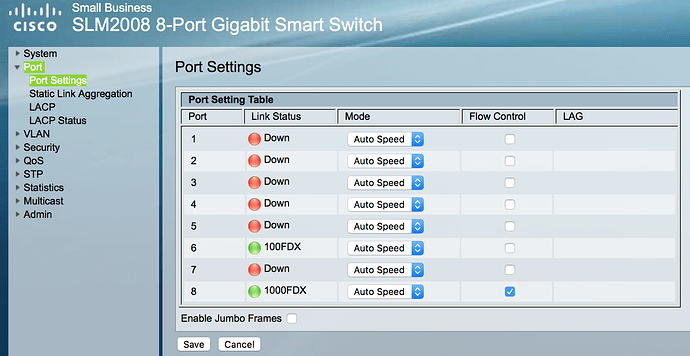 as the RPI3 comes with a 1Gb/s LAN port

Not according to the specs: https://www.raspberrypi.org/magpi/raspberry-pi-3-specs-benchmarks/

To make matters worse, al four USB ports and the Ethernet port share 1 (one) 480Mbps bus. This used to cause problems with high traffic flowing on ethernet and USB simultaneously, but driver optimisation has improved this the early days. Since you can plat DSD128 problem free, it appears to be not much of a problem anymore.

Yep, sorry for the mistake, I was sure about the 1Gb/s ^^
Yes DSD128 is well supported now, as said before, many distributions sound now up to date (piCorePlayer, Moode, Volumio).
However, now my goal is to switch to DietPi for a try. I would like a micro-core Linux like piCorePlayer without SqueezeBox. The DietPi thread seems a bit confusing for the moment, many issues reported, not clear to know if these issues are relevant for our own use cases…

Anyway, thank you for the great support of Roon team.

No known issues at the moment – apart from the odd online repository playing up when installing/updating (very rare). DietPi, while not as extreme as PiCore, is rather slim and writes its logs to RAM by default – sparing your SD card and making it practically immune to card corruption when improperly shut down (read: yanking the power cord.

Nice touch: @Dan_Knight, the great mind behind DietPi, has added RoonBridge to the software install menu – making the installation of RB and the required dependancies easy as… eh… well… Pi.

Pat,
I think I have solved the problem in my case.
I configured my switch through its web interface to enable flow control. (I use a Macintosh so the browser I used was Firefox). I have a QNAP TVS 882T to a Netgear GS716T smart switch then to a Microrendu and then to a USB DAC
I can now play DSD 128 and FLACand .aiff 192khz files in Roon 1.3.
Without the Community’s help I never would have been able to figure this out.
Thanks!
Andrew

I got myself benefit of the help of the community, a long support chain

It seems this concern is not only restricted to managed Cisco switches but Netgear and TPLink seems also concerned. I would suggest to Roon team to leave a big mention to end-users in the installation manual…
Pat

+1 on the flow control solution. My chain is Synology DS1515+ > wired ethernet 2 port bonded connection (two 1gig ports) > Netgear GS724Tv4 managed switch > wired ethernet > microRendu > Oppo HA-1. After 1.3 install couldn’t play anything over 24/96 or DSD64. Music would start, play clean for 3-5 seconds, then descend into garble, then “a file is loading slowly…”. Checked out several threads here and decided to look closely at the switch. There is a ‘Global Flow Control’ option in the switch software configuration which I found to be set ‘off’. I set this option ‘on’ and restarted the switch. Can now play up to DSD256 without issues. I would note that DSD256 with DSP ‘off’ but Volume Leveling set to ‘Auto’ shows a processing speed of 3.5 (!) - but I knew from the beginning that the DS1515+ would be a processor limited Roon Core environment. Anyhow, much appreciate the forum support.

Hi, I discovered Roon 1.2 in trial mode few days before the 1.3 upgrade.
I was a user of JRiver as server and a RaspberryPi3 with Moode connected in USB to a PSAudio DirectStreamDAC with no problem at all. The DAC support DSD only in DoP mode up to DSD128. Roon ergonomy and stability seems to me far, far better than my previous setup, so I choosed Roon definitively

However since Roon 1.3, FLAC in 192Kbs and DSD128 does not play correctly. DSD64 are OK. In 192KHz, the 2 or 3 first seconds are ok but after I have many drop out during playback. In DSD128 the error message appears telling that “an audio file is loading too slowly…hardware issue…”.
As fas as I remember, I had no issue to read DSD128 with Roon 1.2, but I’m not completely sure while the upgrade occurs during the 2 last days of my trial period.
I believed about a problem with my Roon core server on a NUC (Core I3 1,8Ghz/4GB RAM + 120Gb SSD) under Ubuntu Server 16.10 but I observed exact same behavior with a server running on a MacBook Pro Core i7 (SSD+16GB RAM).
Roon bridge is installed directly on Moode (don’t know which Linux it is but it comes with a Linux 4.4.24 advanced kernel). One again I had no problem to play these files with JRiver (as server) and Moode as renderer before. So I tried to replace the Roon bridge on raspberry by the latest piCoreplayer audio optimized version pCP3.11.
With squeezelite, I can play correctly the 192Khz FLAC files, DSD64 in DoP and for an unknown reason DSD128 are down sampled to PCM 176Khz in 24bits. It is indicated in the audio transformation path in Roon Controller.

I’d like to return back to Roon bridge but for the moment Squeezelite performs better than Roon bridge despite the RAAT
Is it a network issue or a known limitation of Roon bridge on Raspberry in USB ?

It the little Pi connected by Wifi by any chance?

If I remember correctly, Squeezelite and Moode pull in the files and do the decoding on the Pi itself. With Roon/RAAT, all decoding takes place on the core and an LPCM stream is sent to the client (RoonBridge). This requires more bandwidth, especially noticeable at higher bitrates.

Hi Rene, thanks, I forget to mention that all my devices (Roon server and Roon bridge) are wire connected to the LAN, no Wifi.

Great – that does eliminate a lot of things.

I’m not sure how RoonBridge behaves on MoodeOS, since it’s optimised for well eh… Moode. You may want to go the DietPi-route on a spare SD card – it’s the best/most efficient way of running RoonBridge on a Pi.

EDIT: Just to add a datapoint: I have a Pi in my main system that is playing PCM192 for hours daily. It is outputting through SPDIF though – maybe (speculation alert!) since the Pi’s USB and Ethernet are still sharing the same (USB) bus, the higher network traffic and USB output are reaching the Pi’s limits – even though that does not rhyme with you saying DSD128 was fine with Roon 1.2. Anyway – if you could try DietPi: let us know how it goes!

Actually, I thought about the same conclusion than you, so I tried to install RoonBridget Armv7 on a fresh install of Ubuntu Server 16.4 armv7 for RPI3. Installation ok, CPU consumption less than 8% if I remember well, but I had exactly the same problems.
I’m very interested by DietPi but the long long thread of discussion about several problem dissuaded me to go further…
Besides that, how to explain that 192Khz files are ok with RoonServer and Squeezelite and not ok with the same Roon Server with RoonBridge. Same hardware, network, …
The Audio transformation path indicates in both case a lossless playback without any down nor up sampling at all.

Besides that, how to explain that 192Khz files are ok with RoonServer and Squeezelite and not ok with the same Roon Server with RoonBridge. Same hardware, network, …

Yes – but like I said: an entirely different way (and protocol) of sending over the data: the LCPM stream sent to RoonBridge requires more bandwidth, but at the same time places less strain (decoding) on the endpoint. I only refer to DietPi as it’s a proven environment for RoonBridge to run 100% fine – you’ll be up and running in 10 minutes or less.

The only other datapoint I can offer is my Cubox doing DSD256 over DoP happily with Roon 1.3 – but that seems relevant here. There’s ample Pi’s in use on these forums – maybe someone will chime in with fresh ideas or experiences.

I’ll try DietPi, for sure. Great! I just understood that DietPi is headless and can be configured through SSH on a remote computer

Why the upgrade to Roon 1.3 would require more bandwidth than 1.2?
I’m a bit confident in the fact that I tested successfully the same config in Roon 1.2 to play 192Khz FLAC files. There another discussion on the forum of someone who was able to play DSD128 with Roon 1.2 and can no longer do it with 1.3…

I’ve read lot of similar issues from peoples using a Cisco switch (it’s my case). Not at home to check my switch model, but may be a clue…