Thanks for the reply. It turns out DSP works, there’s just no button for it on the iphone. You just need to expose the iPhone zone (it’s private by default) and then configure it from a computer.

Thank you. Disabling Private Zone did the job!

Maybe there should be some placeholder button for dsp in the phone’s ui…I dunno. it gets complicated to tell the user what to do. I just know dsp wasn’t in it’s normal spot, so I figured it wasn’t available.

Thank you @andybob solved my problem. You have to disable the “private zone” checkbox that’s on the iPhone zone by default. Then it can be configured from a computer.

Sorry…really dumb question as I don’t have an ios devivice (possibly yet)…does this update mean I can be away from home and access my music on an ios device?

Not sure what “ios playback” means!

No, it currently means you can stream to an ios device on your local network. Outside your network is coming at a later date.

Yes - ‘private zone’ checkbox seems to be the answer! For some reason, it was already switched to no when I was setting up my iPhone 5s.

Sorry, can you help me here? Selection Options? I can only see Select All / None

In the Queue when it’s populated:

All is revealed thanks Andy. Yes the select option “Select From Here” is very useful if you don’t want to clear the Queue completely before constructing a playlist

Continuing the discussion from Roon 1.4 Is Live!

Customizable Play Buttons
“The “one-click” play actions on many screens can now be customized as well. This includes the track row buttons, as well as the blue Play combo-buttons on top of the various detail pages. For example, you can use these options to configure the blue Play button at the top of your Playlists to shuffle, as opposed to playing in order. These actions are configured by moving the desired one-click action into the top slot on Settings > Play Actions.”

An example of this is shown below. Play Actions have been customised in <Settings / Play Actions / Tracks in Playlists> to make “Add Next From Here” the default. 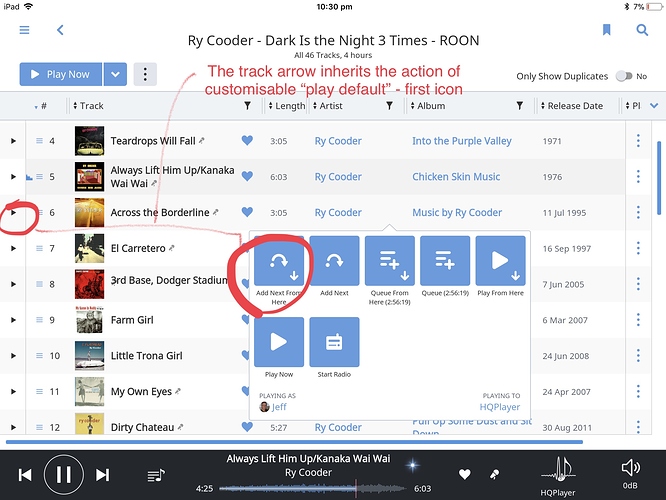 Really nice radio results. Thanks! I started radio off with a George Winston Christmas tune and eventually it landed on “Santa Monica” by Pierre Bensusan. Not a Christmas tune, but I see what it was thinking.

but I see what it was thinking.

her name is Renata.

I love the feature which allows me to stream Roon through my iPad to my bluetooth speakers.

No problems, brother. At least, we can agree on one thing - the new Radio is awesome. I also am letting it make my picks, now.

Great changes. But the volume up keyboard shortcuts appear to be broken on Mac and PC. Volume down works fine but volume up does not work after update.

Transfer photos and videos to your iPad Pro with Lightning to USB 3 Camera Adapter. Buy now with fast, free shipping.

only started using 1.4 a few minutes ago. great update, thank you guys

Outside your network streaming would be incredible . This would draw in a lot of Roon subscribers imo .
This is a definite go in the future ?

As Roon only streams PCM it would only be useful if connecting via lan or wifi. Cant see streaming PCM over 4g being very useful when it eats all your data limit up very quickly.

I may have missed this in the new non-destructive queue, but how do I remove multiple titles from the queue? For instance, I added an album that is set to play after the current track. I want to highlight all the tracks in the upcoming album and then remove in bulk. I only seen to be able to remove one track at a time. This is on Mac OS.

Nevermind: Found what I was looking for in the ellipses above the list. Thanks!

No pb on macOS, with a change : cmd+up or down now increases/decreases volume by 1dB. Shit+cmd+up or down does the same by 5dB. More logical.