So, here we are after the 1.6 launch. Most things went smoothly.
I had no trouble updating Core and player applications (Windows / iPad/ iPhone). Everything went smoothly. I’m not sure what the Linux part of Roon for playback is called but I use that and the update went smoothly there as well.

I don’t usually notice UI changes, i’m not a stickler for details I guess, so most of it just went over my head. I did notice that the now playing screen changed but with a few swipes it mostly looked like how I remembered it (I guess I’m not a big fan of change either?).

The release has worked very well, no stability issues.

The big enhancements do nothing for me (I like to chose my own songs thank you and Qobuz isn’t available in Sweden) but I appreciate them and the value they add to Roon. If the Radio can somehow morph into a curated list of Discover Weekly like Spotify has then I’d probably use that (I know I just said I like to chose my own music, it’s not all black and white).

I think the guilty party is the “Classical Chillout” album, which has Pop/Rock as a genre, and which has a track of Sir Adrian conducting a performance of The Lark Ascending… 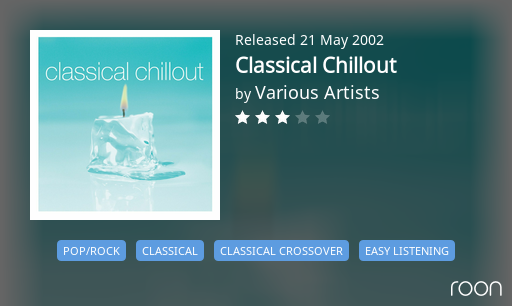 A post was split to a new topic: Bluesound Powernode 2i Playback Issues

I believe that my previous posting was incorrectly split over to support… given the fact pattern, I wish this were being treated as a regression in 1.6 of basic function rather than a support ticket. Especially as it appears from the many posts here and in support that there are others who are experiencing the same regression.

I’ve been seeing the same issue with my Chromecast Audio endpoint. Previously stable, with 1.6 it now stops every so often. The stops seem to be correlated with Roon endpoints appearing or disappearing on my network. It happened when the Roon app on my Fire HD8 tablet crashed and the default Fire home screen appeared. It happens very repeatably when I open a laptop that has Roon installed on it. I’ve reported this, and they’re working on it, I trust.

Not sure how to read the logs, but Roon seems to keep some connections open to some endpoints that aren’t playing anything, and if the remote end (the endpoint end) closes that connection, there’s a re-discovery process triggered which seems to re-build the zones, and seems to fail on re-building the CCA’s zone, perhaps because I’ve got DSP enabled on that endpoint?

There is a huge full height sidebar in the UI, advertising Roon Radio to me… even when I say I don’t want to use it.

Thanks guys, I know about Roon Radio.

Please provide some method to control the visibility of this bar… Either a toggle to show/hide, or a global preference… or ?!

Every (!!!) person who I have shown Roon to, has commented about the radio sidebar. Anyone familiar with UX, as been flabberghasted that such a big (and in some contexts useless) sidebar, has zero controls for showing it (or resizing it).

I was waiting until the “next version” before posting this … to give time to address it with all the radio changes/fixes which had been mentioned as coming.

I’m loving the Qobuz integration. Would love to see roon take advantage of qobuz written artist bios and album reviews and provide the ability to toggle between the current ones (provided by rovi) and qobuzz – kind of like versions for an album. Would also then like the capability to set which is displayed by default (I would choose qobuz as the default) and then display rovi if qobuz not available…

Qobuz said in their recent Roon-related press release that there will be more Qobuz editorial content available in Roon, so fingers crossed ! Bios and reviews would be a real plus, and they are localised so available in several languages.

A few weeks in now from my initial feedback…

I’m actually starting to like the now playing screen. Took some getting used to though. I’d like the option to default to the album art, that’s pretty much all to say on this.

The footer is just plain wrong in the whole scheme of things. The color is wrong in both light and dark themes and album art is much too small and so is the font.

The other thing I’m starting to really hate with much passion is that intrusive, in your face question why a track was skipped while radio is playing. Utterly irritating…please provide an option to turn this off. Just a thumbs up and down option (which is there) will do nicely.

One other thing I noticed is that the qobuz integration seems to slow roon down when it comes to responsiveness. I signed up for a trial, but have no intention of paying for another service. I cancelled my account and deleted the account from roon too. To my joy and amazement roon was back to it’s old speed almost immediately.

That’s all I’ve got to say…

I don’t mind the question on why a track was skipped, but it shouldn’t be persistent. I never answered a question for a track and it kept asking for days and days.

Agreed that the album cover in the footer is too tiny to be anything but a postage stamp. Can’t even see it from a foot away.

Discussion of Roon’s management of 1.6 feedback regarding Artist images has increased to the extent that it warrants it’s own thread (some 23 posts). Please feel free to carry on such discussion in that thread. Moderators will shift posts about that topic into the new thread.

As we mention before, 1.6 is much slower as previos version on my ROCK. Now i switched roon server on Windows 10, and this runs well, much faster as on rock.

Michael, I believe that you can turn off the questioning in Settings.

I’m not seeing any fix to this yet.

If you happen to know where, I’d be very happy!

I will not be able to look until Sunday, but I will search then. I am pretty sure it was mentioned here in the last week or so. Ian

One thing I noticed on iOS is when I click on the Search icon, the keyboard sometimes doesn’t automatically show up.

e.g. I just clicked it from the Now Playing screen, and it displayed. But clicking it from the Albums list doesn’t.