I apologize if this has been covered, but there have been over a hundred and twenty replies since I visited yesterday, and I don’t have the time to read them all right now.

What in the holy heck is going on with the lyrics? When I click the microphone icon on the grey “Now Playing” bar, it now defaults to the karaoke-styled lyrics, which would be fine, except that on most songs I only get but the first line or two and it stays there.

Now, in order to read the full lyrics while the songs is playing, instead of simply clicking the mic like I used to, I now have to click the queue, and either click the mic icon or click the three dots next to the song and select lyrics. What gives?

There are two types of lyrics, and two (slightly) different lyrics icons. The microphone icon with the clockface shows that the lyrics are time encoded and will scroll as the music plays in the Now Playing screen. The microphone icon alone indicates that the lyrics are not time encoded, and you need to manually scroll them in the Now Playing screen, or bring them up in a separate screen for scrolling by clicking the select lyrics menu option.

One thing I have spotted; not sure if this has been pointed out before but this is now a long thread, but Focus could use a Qobuz filtering option I reckon… 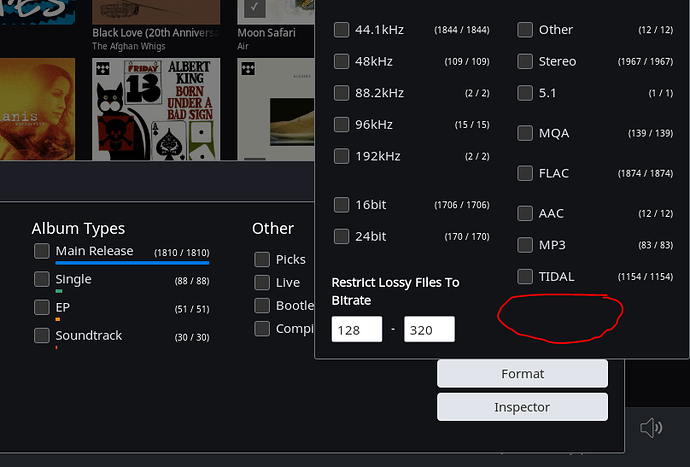 Er, there is a Qobuz filtering option (if you have added Qobuz albums to your library)

Hmm I have Qobuz albums… no dice. Might be me though I suppose, I’ll keep playing.

All devices up to date?

Also, just one other annoyance, if I might. if I have Radio turned off and never use it, the panel should, in no way, continue to take up so much real estate on my screen.

I’ve got it turned off because I’m not using it. The panel should vanish and only appear if I turn it on.
I know Roon Radio is there in the program. If I ever care to use it, give me a toggle in settings and I’ll try it if/when I want to, not when Roon wants to put it in my face. 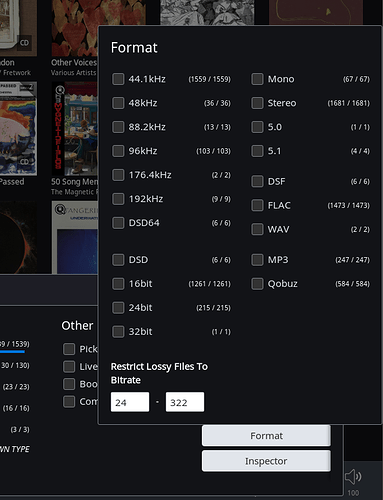 Thank you for the prompt reply, Geoff. With all due respect, if you need more than one sentence to tell me how to read lyrics to the music while it’s playing, Roon’s design team screwed up.

And so assured in it. People may feel deeply but no need to be rude about it.

The world would be boring if everyone shared the same outlook and approach, wouldn’t it? Everyone who works for Roon is a big boy or girl, they’ll be alright, and if not, I’m sure they could message me about it.

A post was merged into an existing topic: “Album View” in Now Playing?

Well that is a revealing outlook I guess.

I’m seeing a lot of reports of slow servers because of all the interest in Quobuz integration so maybe that is all it is.

Will subscribed (not favorited) playlists in Qoboz eventually filter through to roon?

Tim, I have never spoken to anyone on the Roon team with anything but the utmost respect when I’ve interacted with them personally, but, this thread is for feedback based on my usage of the product. In their e-mail about 1.6, the Roon folks even say good or bad, “we can handle it!”

I’m sorry, but, in my humble opinion, if it takes more than one or two sentences to justify a UI choice, it’s the wrong one. That’s how I feel.

The explanations are getting longer, and the options more convoluted. I don’t believe that things are moving in a positive direction as far as the user experience is concerned.

I’m typing quick thoughts because I’m trying to get a few in to break up the monotony of my work day.
If you are offended by my manner of speech, I do sincerely apologize, but, I’m sure if anyone on staff takes issue with how I’ve addressed anyone, they will certainly communicate with me about it.

Great! I’m compiling some ideas right now, when you start to think about it the solution is not so simple, libraries and favourites are definitely not the same thing, but I think closer integration with streaming services will guarantee a healthy future

With all due respect, I don’t work for Roon.