2 posts were split to a new topic: Instability and repeated db updating after 1.7 upgrade

Bolding all the font makes the UI look unfinished.
Still not mobile/remote playback (been waiting for four years).
Internet radio is nice 'n all, but why would you do this when maintaining this is sure to take away developer’s time (which could be spent implementing MY OWN PERSONAL INTERNET RADIO).
Roon needs to expressly state what information of MINE is being collected and sent. I am getting increasingly worried about this.

Discover looks better.
Everything else is the same (for me).

A post was split to a new topic: Unable to start qobuz streaming

Roon needs to expressly state what information of MINE is being collected and sent. I am getting increasingly worried about this.

I can play Qobuz just fine with Roon 1.7. Right now may iMac is acting as my Roon Core and I am controlling it with an iPad.

A post was merged into an existing topic: What I would have liked in Roon 1.7

The longer I look at this, the more perplexed I am. Who the hell was in the focus group who said “yes, bolded font EVERYWHERE looks so modern and great.”

Be honest Roon, did you just make this change for the sake of an additional line in the “New Features” rollout for 1.7?

So far 1.7 is pretty good. I have noticed that the Tag popup is slow to fill in my tags each time I want to modify tag info. It’s taking at least 5 seconds, maybe longer to fill in the rectangle. The wording for the Template itself appear immediately, but the text and check box for my tags are what is taking longer now than on 1.6.

A post was merged into an existing topic: Roon 1.7: the fonts are too bold

Sorry for the more than candid question, where is the “New releases for you” feature? 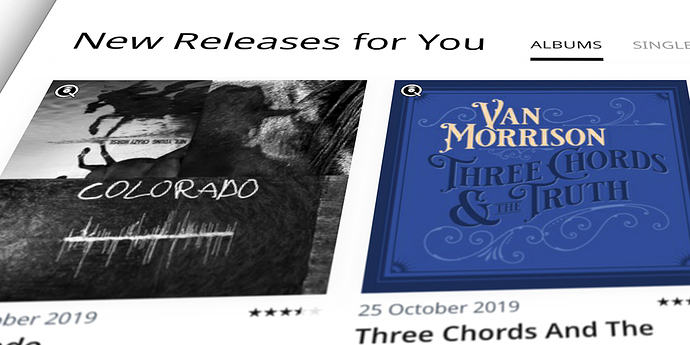 You can find the “New Releases for You” feature on the “Overview” page in Roon. Scroll down the page past “Recently Added” and you should see it!

Thanks John, I had actually found out meanwhile.

One thing popping up to my mind with this “release for you” feature: how can I tell roon to give preference to Qobuz vs, Tidal, or to best resolution, when displaying an album available with both? Typically Hi-Res (Qobuz) is better than compressed same Hi-Res/MQA (Tidal)

@Patrick_LP - I couldn’t agree more! I would really like either highest res, prefer Qobuz over Tidal, Local, etc…

Yay, a new update!
But the very first thing I noticed is a slightly fuzzy/blurry font. I thought one of the updates was supposed to improve readability? Maybe it’s a setting on my PC? I should note that fonts have always been a little fuzzy for me with Roon but now they seem a bit more blurry.

And still blue colors throughout the entire UI? What about those of us who are color blind and/or can’t see blue very well?

And I was super excited for New Releases For You but it’s about 50% classical which I’ve never listened to on Roon or Tidal, 30% albums from irrelevant artists/genres, and the remaining 20% is fairly spot on.

Can’t wait to dig in to more features.

Thanks John, you may consider this getting more priority with this “release for you” feature being out.

Seems to me current algo is prioritizing resolution (with caveat MQA is graded equal than same resolution uncompressed, we may consider this as a bug) with no prioritization on service (agree this would be an enhancement)

Congratulations on getting a major release out, and I am sure the fundamental change in database and infrastructure technology, which serve the Roon product well.

However, the overall release is still wanting in my opinion, and looks like it needed further testing and feedback in the Beta stages

And that’s just in 10 minutes following upgrade to this release.

Sorry to be negative, but, as a user who has have waited a long time for this release, but it doesn’t seem to have taken a user’s perspective into account - in terms of what I want from the UX, what’s my most common action on the UI, I want to do this - how do I?