So 1.8 is out. Lot had been said good and bad in the past 24-36 hours since the release. And lot of it is repetitive and angry. And repetitive is good, because that is how big issues are identified I want to sum it up from my perspective (which is somewhat not a typical user perspective as you will see in the end)

I joined Roon a couple of months back. I needed a true audiophile solution for my musical needs and Roon was it. I have my Server running on a Linux machine and I have two Raspberry Pi 4 running Roipeee, with USB headphone DAC/Amps connected to them. The sound quality was amazing on my HiRes headphones. 1.7 was super stable, not once did I run into any issue that would require me to restart the server or wonder what the heck was going on. I was free to experiment. Experiment with features and figure out how to make those features work for me. I loved it!

Roon apps weren’t perfect, but they were easy to use. The iOS app left me with the unshakeable feeling that it was a severely dumbed down version of the iPad and desktop apps. For example there was no Focus feature on iOS, no way to change your dsp settings on iOS, etc. Not a deal breaker just a bit annoying. But everything was functional. It was easy to tag, untag, add to playlist, remove from playlist, I knew where to click etc.

And then 1.8 was announced. I was happy over the moon. It was very promising. I was hoping the maybe just maybe some of the annoyances will be addressed (even though they were not announced in the emails sent out). After all this was a major release and it was reasonable to expect changes that were improvements.

After installing I could not believe my eyes.

And then not mention that most of the missing features from 1.7 are still missing:

All that hard work went into revamping something that worked! Why fix it if it ain’t broken? There were things that need fixing, but very few of those had been fixed.

I know this is major one. And having issues is acceptable. Things have to align, have to be ironed out etc. Like with every other new thing and release. But these are major things we are talking about. I should not have to experiment to figure out how to make something work, find a workaround or try to beat my disbelief about the broken UI. Having to do that kind of experimentation is just bad user experience. Full stop.

At the top I said that my perspective is not your typical user perspective. I spent the past 20 years in the softwore QA industry and therefore I understand how these things work. But I am also an avid audiophile who had enjoyed every minute spent with Roon 1.7. As someone who understand Software QA, 1.8 is a failure. Failure of software QA and failure of priotizing changes/fixes. Just please accept it. Because when you do accept it Roon folks, you will then be in the right place to move on and fix things. You are not the first nor the last one to fall into this trap of releasing something ASAP, just to have it released. Software QA is everything these days. Functional bugs, bad user experience, GUI issues are equally important. And if you have limited resources, that is fine. No need to rush it. 1.8 could have waited another few months. Test it properly, fix things and THEN release. We can wait! And waiting for a mature and stable product is a good kind of waiting.

In any case I love Roon. I love what you guys are trying to do and are doing. You fell into this trap, now just please pull it together and fix this. I hope Roon team makes the right call here and learns from 1.8 problems. My experience with 1.7 tells me that I can count on Roon team. Please make your efforts count

As a QA engineer I was left asking myself, “Does Roon even have a QA team?!” after this release. It’s just not acceptable. It’s amateur.

I can fully change DSP settings from my iPad Air: 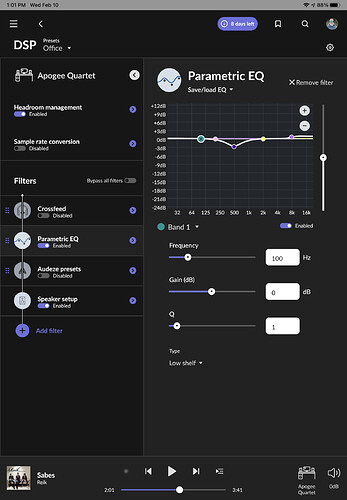 That would of won this update over for me

I’ve just found out about tagging: no way to remove tags, and the tag drop down doesn’t show which ones are already applied to the selected item.
I would add that now is not possible to edit compositions in bulk. As soon as you select more than one composition, the “edit” option disappears from the menu.

how do I remove my tags

You have to learn

No more star rating of albums

Maybe it has been rarely used and consumes resources

Etc, etc…
Everything is relative

Well, people tend to post in user forums when things are different than what they would like. You are commenting about a stated fact, not giving a useful answer. I don’t know if tagging is completely broken, but as of now it’s much more limited than in 1.7

how do I remove my tags

HUGHE step back from what offered 1.7, where you could remove tags directly from the album/artist etc.

You have to learn

Really? Decades of UI design were just negated by your comment.

No more star rating of albums

Maybe it has been rarely used and consumes resources

Unless you have hard data about the usage of this feature, your opinion about the matter is of little relevance. Many people are complaining about this, so “rarely used” doesn’t seem to apply in this case. And about resources, I wonder how much of them showing little stars next to album art can consume.

Less options and more steps to do the same task seems pretty objective to me.

In this thread I hear both sides, which is good. We have the QA guys, probably experienced in incremental changes done in big corps. Also, many operating with much higher budgets, to spend in the end extraordinary amounts in minor visuals, see MS, Appl,… Remember, here we are with an SME, still startup mentality, main activity pivoting. QA … not affordable in this range of complexity they (like to) offer. As long as Roon is in this product life span (emerging) and keep to stay agile, fixing the major fails within weeks (let’s see), for me all is fine. I’m fed up with the deterioration Appl is showing in innovation for sake of market share, Roon still is refreshing, has the bxxls to risk a good but more and more limiting concept for something new, they can afford higher risk and have immaturely released. Probably it would have taken them 1-2 years to identify 80-90% of the pitfalls of their fresh implementation with the number of beta-testers and QA people equivalent to the feedback they have received with 24h from this forum. Now in that startup race it is important Roon can fix the most important issues within days maybe up to 2 week to not loose a good part of their user base. Roon has chosen a business model to rely on agile monthly subscriptions from users that vote with renewal or move on. So fixing the disaster for non-US settings in iOS that makes the update only partial usable is crucial. Other changes, like too big album covers, reducing the number of shown albums on most screens, can be easily added back into 1.8. Other issues like tagging inconveniences might also be resolved.
The hug improvement of global and much richer implemented focus extended to streaming services is the big win of giving up the ‘old’ concept. Metadata fully linked to discovery of new, not obvious connections between bands, producers, interpreters, hired musicians, etc. is as by today unique. This is the value proposal for the next Roon period. I’m more excited than turned down by the new release than frustrated as German speaker suffering to change my OS language to US English to be able to make setup changes or look at my listening history.

Tagging is completely broken. No mass tagging anyone, how do I remove my tags?

Its not very intuitive but I think you can mass add tags from the new three dots in a circle symbol at the top of the album view. For example I highlighted 5 albums and added the tag “Test” like this: 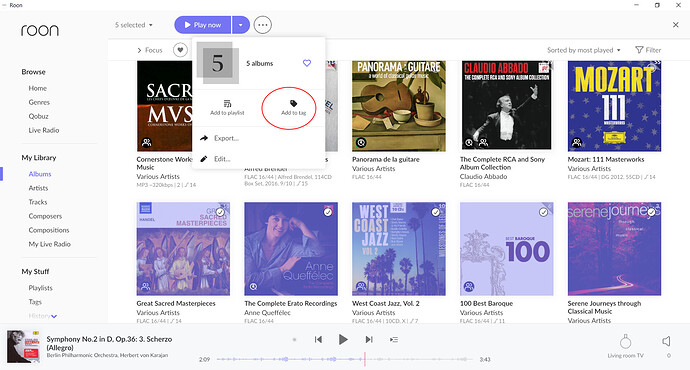 In order to reverse the edit and delete the tag “Test” from those 5 albums, first find the tag. Then highlight albums → 3 dots → edit → delete tag. 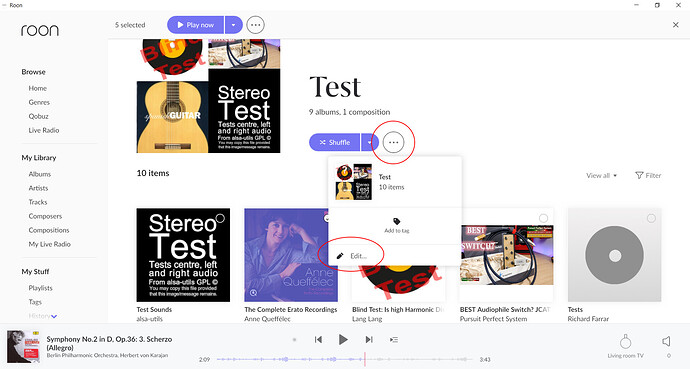 There are difference and more steps involved in accessing the tag editing logic but then it is similar/same as 1.7. Not seeing any value add TBH. Just more steps and rather confusing font and layout choices. Still haven’t figured out where everything is, but my guess is most of it is there, just much harder to find.

Yes, the ability is there just more clicks.

In 1.7, you could right click on a tag on the album page and choose Remove. That ability was deprecated.

In 1.7 you could bring up the Tag Manager and remove/add tags. That was deprecated.

In its place is an Add Tag feature, which only allows you to add 1 tag at a time.

Now, you can Add Tags everywhere, but, can only remove them by going to Menu/Tag, choosing the Tag, and then highlighting and removing the object (album/artist/ etc).

Why in Roon 1.8 there are no visible album covers in our music playlist. It’s unacceptable !

Wow. I was hoping it was some kind of bug to be solved in 1.8.1, but now I see this was intended?
Really hard to understand.

Do you know the reasons for the changes? My impression is that there have been a lot of these.

Well said, I am also disappointed with the UI.

As a QA engineer I was left asking myself, “Does Roon even have a QA team?!” after this release. It’s just not acceptable. It’s amateur.

As a former QA Engineer, SDET and current Software Engineer, I say we stop arguing by authority!

It’s just striking to me because I’ve seen dozens of comments blaming beta testers for dropping the ball, and that’s a fundamentally flawed and ignorant perspective about whose responsibility quality is. I’d lose my job if I didn’t catch the bugs that released with 1.8. My whole team probably would.

I’m not crazy about the UI redesign, but I wouldn’t call that a bug, exactly. Lots of wasted space, to be sure. And I’ve found no other bugs. The core, running on a NAS, found all my devices, including the Chromecasts and RoPieee boxes, and seems to be correctly streaming to them. Those griping about the lack of an OR option in Focus should reflect that the word “focus” refers to narrowing options, not expanding them.