Puzzled - sorting by release date works perfectly for me:

There are 3 options for sorting albums under artist - popularity, release date and title - wonder if you have popularity set rather than release date?

In the global settings, I have sort by original release date (I also tried release date). When I view the artist albums, they are scattered by popularity. I then I have to click on the sort button and say sort by release date, and it works. The issue is, the default sort should be based on the global settings and its not. 2nd, I should not have to click the sort button for every artist I bring up. This function has worked without any issues for years, why has 1.8 deviated from how it used to work? Same goes for showing of hidden albums, which still doesn’t work

No there isn’t - it’s pretty much my only remaining beef with 1.8, although I guess I’m used to it now. I don’t have the sidebar permanently visible, so I see six albums per row.

Agree that sorting by release date should be the default - but once I’ve set it that way it remains set when I look at different artists - so needs fixing but maybe usable for now?

Hidden albums is also for me a problem - but my issues were there in 1.7 - counts of albums / artists / tracks are wrong (assuming that if it’s hidden it should not be counted).

I like the move to vertical scrolling (but agree with others that going back to the top of album list in large library is intensely frustrating).

This is definitely frustrating while switching between album list and album details view. It seems that in album list, the filter button is active in some sort of way. If you click on this button and then the x button, then you can switch between the two without going to the top of the list again.

Weird! How did you figure out this work around?

Thanks to the Roon team for this beautiful new UI. As promised, it’s very magazine-like, and easy on the eyes.

The new Roon version sure has me coming back to the forums more often.

In Settings >> General >> Browsing Preferences, turn off ‘Always show he sidebar’. I then have 8 across on my PC.

Have you tried this recently? I just did this search. It took a while for it to return a result (maybe 18 seconds), but I got a result for the artists Cam Deas.

I miss the ability to see which playlists a track belongs to. 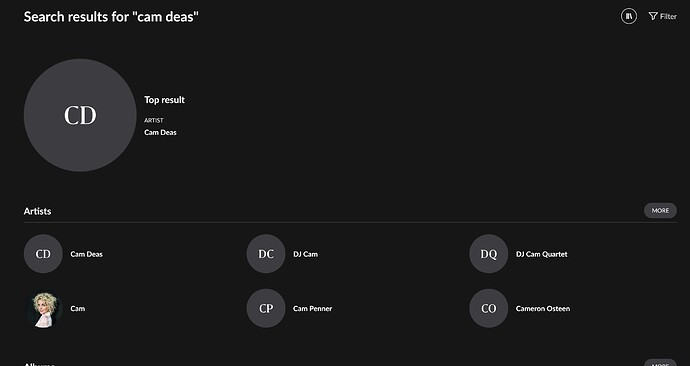 I have just tried. And it freezes when I enter “Cam Deas” profile. I have cleared cache and this is still happening.

where is your Roon core installed/running?

The new design is a taste-challenger

Same here, shows up fast. But what is a bit strange is that under ‘overview’ I can see 2 albums, but under ‘discography’ they do not show up, only appearances (2) and one compilation. This with Qobuz subscription in France.

I am just using PC, so on partition C:

, although my library is on the other ssd.