Installed on Nucleus+, iPad, iPhone, Windows PC. No issues. I like the new interface…a lot! Thanks Roon!

@Scott_Fletcher On the album page select info, the review if there is one will be there.

But, if anything, I’d personally prefer the waveform graphic to be larger & stretch completely across the screen…

Yeah, the new design is pretty, but the waveform display area is really useful for jumping/resetting play position – so for actual practicality, it should take up as much of the available horizontal space as possible. Even in the old design it would’ve been great to have more available placement precision, and this new design goes in the wrong direction with regard to that practical matter and instead gives us less.

Try using Focus instead. It makes things much easier for large boxsets.

I love the fact that zones are now a separate UI element on my iPhone. I am constantly changing zones and being able to just look down and see what zone you’re interacting with (and to quickly change the zone) is huge. Seriously. That alone could have been v1.8 and I would have been happy.

I really dislike Discover being a skinny little bar stuffed at the bottom of the Home page. I don’t have a gigantic library (2.3K albums) but Discover constantly surfaced things I had forgotten about. It was generally the first screen that I went to when I opened the app up. Having to dig around for it now is a pain.

yep - the only problem is that focus does not work the same with unidentified boxsets, of which I have a lot… no compositions

In 1.7 selecting multiple tags would provide all albums that are in all the combined tags. In 1.8, it will only display albums that are in each of the Tags selected. Which means in most cases, none. If the album is not present in each tag selected, it’s not shown.

Everything really looks fantastic, great job guys!
I was a purple complainer but it’s already growing on me.
Love the new horizontal scrolling. Thanks for listening.

Thanks Ratbert I thought it would be still in there somewhere!

Why is there a setting for album view icons (eg in library, compilation, bootleg etc) and yet they don’t show up in any view of an album that I can see anywhere in roon. What exactly do they do?

Most of my albums have zero icons, the occasional Qobuz icon. Surely every one should have “in library” at the least?

Album Credits:
If there are more than a few people listed, all those pictures - too much of a good thing. Have to scroll down just to see some basic information.
Sometimes less is more. Just a text list of the names and role in the album would be more useful. The names of the participants could be links if you want us to see more info.

Has the way labels are displayed changed? I have an ACT card on file. Before the update, I saw all the CDs with the ACT label and now I don’t see any

A post was split to a new topic: Crashes also when I scroll down in the Tidal view

In TRACKS view for an album, I no longer see which tags I may have attached to individual tracks. How do I reconfigure this display to get that important functionality back?

EDIT: Here’s one of my use cases:
A frequent part of my workflow is that I’ll play through all the tracks in an album – sometimes just to enjoy a leisurely real-time play through the album, often while scanning through albums to categorize tracks for later play under other circumstances.

If something I like catches my ear, I’ll add a tag to help me find the cool tracks later – I might tag something as “cheerful” or “glitchy” or “dubsteppy” or “long-jammy” or “squonky” or “swinging” or “hurrying” or having male voices harmonizing. I also have a general tag for all tracks I find interesting enough in some way that I might want to play them in a future radio show (which is distinct from applying a heart to tracks one wants to hear come up more often at home).

Imagine, if you will, just how badly screwed I am when I find myself in an album view which gives absolutely no clue as to which tags are already applied to any of the tracks.

Sure, the main purpose of tags is to go from a tag to all the things tagged with it… but while doing tagging, you really really need to see what’s already tagged and with what tags, or every time you’re doing some auditioning and something grabs you, you have to go through the time-consuming and inconvenient motions of blindly tagging (possibly re-tagging) that thing – or go down the even longer path of doing a tag search to try to find the track you’re looking at in that tag’s track list – because you can’t see what’s already tagged.

My reaction to this is a mix of fury and despair. Please fix it.

So far I like it a lot except the purple colour of some text, buttons, waveform ect. I think a light blue (like the blue colour in different shades used here on this forum) would be better…less aggresive. When I opened it for the first time I thought that I have opened a high contrast mode and I was looking for seetings to change it to a more suble version. It looks atractive at first but it is somehow tiring.

The wave is shorter now which initially I thought is no so good but that gives more space for any future ‘buttons’ I guess. Not a big deal.

Generally lots of good changes! Thanks.

The date of addition of file to the database doesn’t seem to be available. Anyone know where it’s hiding?

3 posts were merged into an existing topic: Settings not displaying properly or crashing on 1.8 [Ticket in - Workaround in thread]

Well, that’s very strange. I too have a lot of unidentified “boxsets” (personal recordings of things like the BBC Proms). Yet with filetags, I seem to have a very workable Focus system; including Compositions: 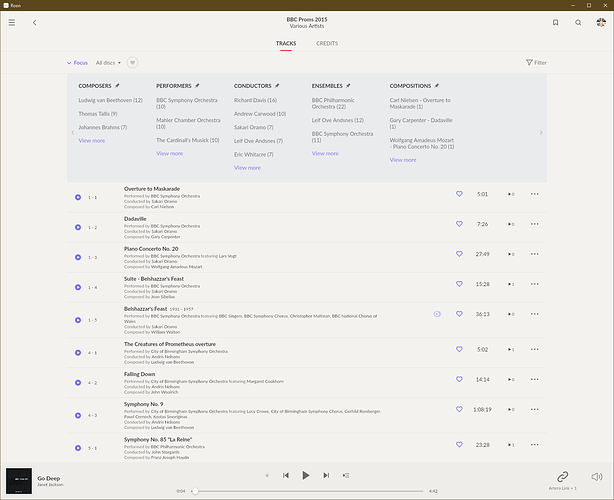 The ‘versions’ tab seems to be at Album level, whereas it used to be at track level. Is that hiding somewhere ?