“We’ve been paying close attention to comments regarding scrolling behavior on iOS and we’re pleased to include the first round of changes in this week’s release. Expect ongoing improvements as we continue to improve Roon’s scrolling experience.”

Any one on Windows 11 experiences Roon (Remote) quits (or crashes) by itself?

It’s been stable for me for several hours.

This is great! For the FIRST time in my Roon experience (couple of years), playback starts immediately after pressing ‘play’ (as it was supposed!). Let’s see if it doesn’t get slower as days pass, as usual and reason for restarting the server at least once a week. So far (an hour) it is working very good, thanks!

Yes, I’ve had the remote crash a number of times. Fortunately it doesn’t interrupt playback since that’s handled by RoonBridge. It doesn’t take long either, like within 5 minutes of starting.

I just tried this update. I got this: 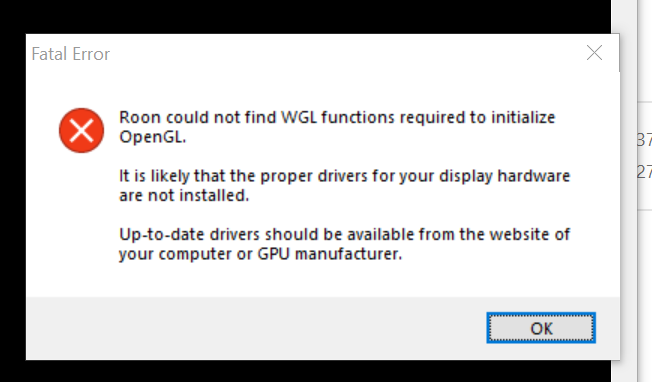 I’ve seen this problem in the past, when I updated. The problem does not recur if I start Roon manually.

I should note that viewing the Lyrics of a song currently playing makes it crash pretty fast.

I have never had this issue until this build (903), and the lyrics display is kind of jerky.

most exciting short term “fix BBC radio channels” seems to have done the opposite. Before 903 they dropped out a lot, now they won’t play… BBC World Service esp.

You joking? It’s been in the UK store since yesterday.

No, I’m not joking, my original comment stands. After nearly six years of Roon updates the “slow distribution” from apple continues unabated. The distribution from apple appears to be server based, not geographical and nothing has changed. Roon will auto-update when the time is right & the appstore notifies when an update is available, neither have happened.

Hi, the audio devices connected to the Mac Mini running the Roon Core are no longer visible in the audio setup options

Very strange. I’m in the UK (London) too and had it.

Paul I got it on my iPad (had to go looking) last night about 10pm. But I had to manually pull down to refresh

Is there more information available to these two points from the release notes:

In France my iPhone updated yesterday, bu the update is not yet available for iPad (both devices on same account and WiFi network)