Runs stable on all my endpoints and remotes. Had a few crashes with WIN11 remote in the beginning when opening lyrics, but not anymore.
And my hair is growing back…

It’s also funny… I now see that the scrolling is smoother on iPhone 12 and old iPad, but I can’t say the way it was bugged me before. I think other people have more serious scrolling issues than I did, but maybe I just don’t notice / pay attention enough. Anyways, I can see that it is smoother now!

Restored from a cloned drive to 898 and all is back to normal. Times are as before with the exception of yesterday.

I’ll wait until the dust settles before updating.

You may have missed this:

Hi everyone, After some investigation, we’ve identified an issue affecting MacOS 10.13 and older, which can make it impossible to play to local audio zones, including USB DACs. We have a fix going live now for Mac only, and we appreciate everyone’s patience as we looked into this! Thanks everyone! - The Team at Roon Labs Roon 1.8 (Build 904) Release Notes Roon Build 904 is now rolling out for macOS only. No updates to Windows, Windows (64 Bit), Roon OS, Linux , Android or iOS this time. V…

Indeed, thanks for the info, Sir!

Hi, my Roon Nucleus with 903 doesn’t work.
Has someone a same problem?

Very few, I suspect. If you want support, then I suggest that you open a support request in the Nucleus Support category of the forum.

In order for Roon’s @support team to better assist you, please provide a brief description of your current setup and the nature of the issue using this link as a guide.

Make sure to describe your network configuration/topology, including any networking hardware currently in use, so they have a clear understanding of how your devices are connected. Thanks.

Smooth update; everything working fine on iPad, Mac’s and PC

Running the build 903 Windows-Client in ubuntu/wine results in high cpu load - even if idle. I never had this effect with the previous versions and so the program is unfortunately not usable. Anyone with similar problems?

i have the same issue

Ok, after every possible reset my Nucleus is back up again

This comment kinda makes me angry😡if uve been paying close attention to all the complaints about scrolling on ios then why has it took from the middle of 2019 to Feb 2022 to try and fix it?also this problem isn’t just happening on ios,I’ve got a Samsung tablet and its jst as bad,another user with a amazon tablet confirmed the same scrolling bug on that aswell,so its happening on a few os,this is obviously a big issue

Yes the ‘scrolling behaviour on iOS’ is all somewhat non-descript. I am presuming this was supposed to include iPadOS as well.

I was excited to test it out on my iPad Pro with Magic Keyboard ……… and nothing. No ‘improvements’ whatsoever. Still the trackpad has next to useless functionality in Roon.

Would be good if they said exactly what the improvements are.

Better still if they explained why they fail to embrace Apple’s Magic Keyboard when virtually every other app does?

Very minor issue.
Core MacMini M1, 8GB, Monterey.
I have the Mac in standbye during the night.
I wake up the Mac every morning and until 903 everything started fine.
Now with 903 I have no audio devices on ipad and my iphone right after the start.
When I conect via VNC viewer on my ipad to my Mac, I can see the audio devices in the Roon app on my Mac, without doing anything, and can start playing music. From this moment the ipad and the iphone also see the audio devices (without any restart, reconnect or anything). Weird.

Same with 904, no biggy but still weird.

I hear you I was too and that’s the first thing I tested out but alas I was wrong, surprised, shocked… this fix is taking too long, it’s a small issue that should have been fixed years ago.

With build 903 I now have a few times per day that this radio station stops and the message is displayed that the station is maybe not reachable or the address has maybe changed.

Then a few minutes later it suddenly works again and the stream can be played. 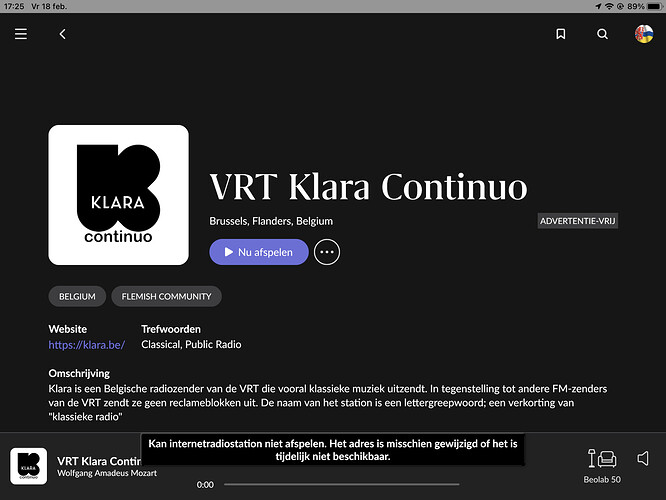 Never had this problem with this station before the Build 903 installation.

Is there any activity to look at the W11 crashes? Mine has been crashing randomly but regularly since the 903 update?
In each instance i can start up again and continue from where it left off, i have also noticed the scrolling of lyrics to be jumpy but i can live with that if the music keeps playing.

I am curious what the back out plan is for this software release???

Is there anyway i can revert to the previous version while the bugs are ironed out??

… Its worth pointing out that i’m a new user but as i approach the end of my trial this isn’t a great introduction to Roon.