Well potentially, I’m not a technical designer at RME so I cannot answer that.
A difference exists, and that’s my point.

How then did Topping know about the error if the difference is not heard? Why fix it if you can’t hear the difference?
Why do many software players and DACs have a phase inversion function?
In fact, in the topic for discussing the problem in E30, on the AudioScenicReview, someone posted a file containing alternate phase switching. Many people have heard the difference.

I will add, that I hear audible differences between my Laptop/NUC (USB) as a Roon endpoint V’s my RPI4 (USB-Ropieee) Is this a DAC issue also?

The problem switched the output polarity which is far easier to measure than to hear. You fix it because you’ve broken a convention and it can cause issues with other kit down stream.

Why do many software players and DACs have a phase inversion function?

In case there are issues with polarity downstream, it beats reversing wires. To be clear we’re really be talking about polarity here, not phase

If someone has problems with the equipment, then obviously those who hear absolutely nothing.
On the other hand, they are happy people. Knowledge multiplies sorrow.

Polarity reversal and 180 degree phase shift are one and the same.

Sorry, I’m really saying it doesn’t pay to make assumptions when diagnosing issues. Just because you detect a change when 1.8 was rolled out, it doesn’t mean that the problem’s caused by the new version.

Polarity reversal and 180 degree phase shift are one and the same.

For these purposes they’re equivalent, but phase and polarity aren’t the same thing:

And what else can this mean if, apart from updating the player, nothing else has changed?
Do you offer an option with mystical powers?
It seems to me that the answer should lie on the rational plane.
Reversing “absolute phase” = reversing polarity.

I agree that the answer will certainly lie in the rational plane. It’s one of the reasons I’d not restrict diagnosis to a change in “bit-perfection” as the cause of any sound quality issues. I’m not going to tell people what they can and can’t hear, just be rational, patient and persistent when isolating the cause.

These are equivalent but there are other “angles” to phase

Look, the player has been updated and some users note that the sound has become worse. We can assume that it seemed and that after a while addiction will come. But there is no addiction. You can’t listen to any music because it doesn’t sound like you are used to. And even there are thoughts about finding an alternative player. But at one fine moment you find that the inversion of polarity returns you the sound to which you are accustomed and thanks to which you made a choice in favor of Roons. And switching on the fly, in my case, demonstrates a clear difference in sound and suggests that the first impression was not a figment of a sick imagination or a consequence of exposure to magnetic storms.
Polarity reversal is a material thing, right? If the waveform of the music signal were sine, then it is obvious that no audible change should occur. But it has a complex harmonic character, the signal has a beginning and an end, there is an attack phase and much more …

some users note that the sound has become worse

While some think it’s improved and many detect no change at all. I don’t doubt some of these observations are real. I’m just not convinced that Roon’s always the issue.

Then it sounds like you have a solution, it may be that you’re sensitive to polarity inversion. The ease with which you could address the issue sounds like a good thing to me. I’d still be curious what it is about your setup that makes this the case.

But it has a complex harmonic character

I agree that there are reasons polarity reversal might make an audible difference. Research suggests that detecting it by ear isn’t an easy task though.

I’m just happy AF that I have music (and popcorn)

I hear audible differences between my Laptop/NUC (USB) as a Roon endpoint V’s my RPI4 (USB-Ropieee) Is this a DAC issue also?

Your DAC’s USB receiver is not able to block sufficiently the electrical noise coming down the USB cable from the source. Different sources generate different quantities and qualities of electrical noise. Less noisy USB sources alleviate the effects of mediocre DAC USB receivers, but it is possible to build DACs with USB receivers (such as the Soekris dac1541 I mentioned, or a Schiit Yggdrasil with their Unison USB board) that are pretty immune to the source’s attributes (provided the source is within spec for USB audio, of course). OTOH, I’ve also owned pricey DACs where USB with any source was noticeably worse than S/PDIF coax or AES.

You see, “better” or “worse” are subjective parameters. I have friends who believe that the sound has changed for the better and I’m not going to convince them of this. This may be due to both personal preferences and the state of the system at the time of the update. I have no desire to analyze this. Either way, both camps hear audio changes after the update.
There is no particular desire to describe their impressions, since they basically coincide with those from those users who were not happy with the changes in sound.

Here in lies the problem. I tend to agree with your experience/opinion… but if you take the “measurements are everything route”, the RME is an exceptional performer via USB. So this argument doesn’t really hold. Although the USB performance is slightly worse than Spdif on the RME ADI2 Pro model, Noise and jitter rejection are well below audible levels.

At the end of the day, measurements help provide a performance indication, listening with ones ears is ultimately critically important. I tend to hold the position that our ears are not microphones, measurements only tell us so much.

ASR V’s Archimago results are a little different, as they are different revisions of the DAC.

I reviewed and measured the RME ADI-2 DAC a year ago. That was just prior to getting my new Audio Precision APx555 so the measurements don't directly compare to what I publish now. So a local member kindly loaned me his ADI-2 DAC to get fresh... 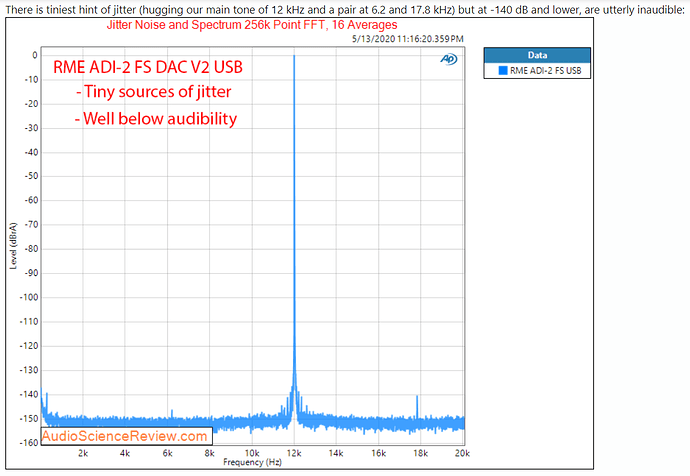 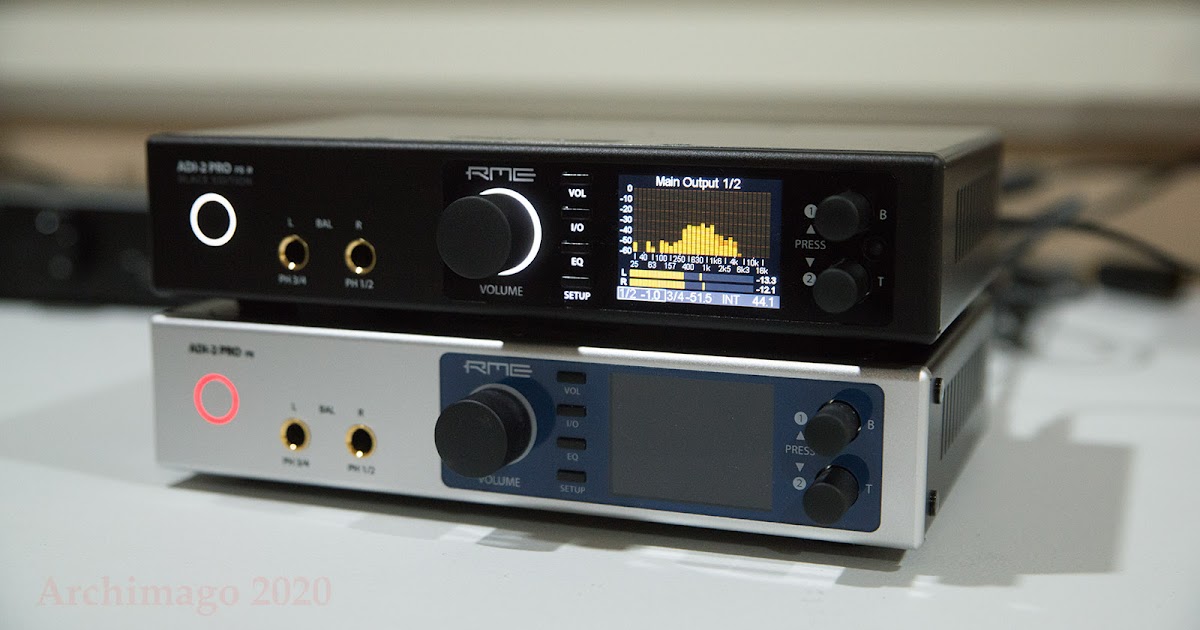 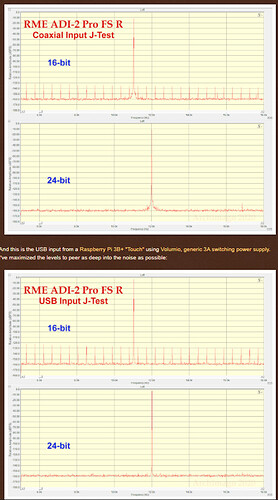 I tried and did not find anything unfortunately.
However that resulted of experience in algorithms… 25 years ago, so with a compute power about 4000 times smaller than available today (Moore’s law). Same for memory, so the length of convolution/resampling operators used then were at most a few hundreds of samples.

Today in most DACs resampling uses convolution filters a few thousand samples long. But this still induces residual truncation hence loses accuracy (as per the Howard article of which I enclosed the link above).

If one had told me by then that in 2020 i would have been able to stream digital flow while recomputing a mathematically perfect waveform using a sinc function in stereo on the fly on a million samples, at an output rate of 384 kHz, I would have said a dream come true.
Well, that one dream has effectively come true: it is what my MacBook Pro and HQplayer are doing while I am listening to… Spiegel in Spiegel, right now.

I don’t want to do “advertising” yet everyone can try and see - HQplayer in trial mode allows 30 mn of consecutive listening. Or buy Chord M-scaler plus one of their good DACs, the computation is faster (there is a 12 s lag instead of 1.3 s operator length with sinc-M).

Here in lies the problem. I tend to agree with your experience/opinion… but if you take the “measurements are everything route”, the RME is an exceptional performer via USB.

Live music is adequately defined as a succession of a myriad of interspersed transients with a world of variable decays and harmonic contents. Although they can theoretically be decomposed on a linear basis of sine waves, or rather via a time-frequency transforms, the audible quality of many audio components, can only be very approximately defined by measurements of constant power signals of varying frequency.
Audible distorsion is a complex, multishape animal: harmonic, amplitude and phase, intermodulation, thermal distorsion, memory effects, etc… It is long known in analog domain and it happens to be… the only domain in which we can give an opinion on the quality of digital audio.

Claiming that a simple set of measurements tells it all about audio qualities would be like a marine biologist defining uniquely jellyfish by one measurement of diameter of umbrella plus one of average filament length, to try to browse an awkward analogy. In real marine life, some jellyfish are harmless, others are not, and this is almost unrelated to size.

That’s a shame, as you say there were a lot of tricks employed that were appropriate when compute power was in short supply. I’m also a fan of Chord’s approach to reconstruction which is aspires to theoretical correctness as far as possible. Have yet to take the HQPlayer plunge for fear of the depth of that particular rabbit hole. I’m sure it’s fun, in essence that’s the problem…

What impact does the control app have on sound quality?

It simply passes instructions to the Server

there may be, but interesting though. i run roon lossless on a dedicated mac mini, so i won’t notice anything,