Roon 1.8 Where have suggestions gone

Previously when playing an album there would be a couple of suggested albums showing, this feature appears do have gone? Or do I need to enable somewhere?
It was a great way to discover new music or just remember an artist I already had albums by.

Same issue and same question. That was a great feature for finding new music. Is it a settings issue or no longer a feature?

Add me to the list looking for an answer on this.

list your platform your using, I’m on win10 PC 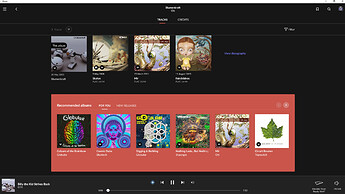 and my Android S9

both from Now Playing page, scrolling down to the bottom

I am happy to report that suggested albums (now Recommended Albums) are now being populated on the Album playing page on my PC, Android and Iphone remotes. In addition, there is a Selected discography tab which shows albums by the artist playing.

Like others, these tabs were missing for the couple of hours since I downloaded the update. Then, out of the blue, they appeared. After the upgrade, I got a error message with Roon radio which only played tracks from my library and features associate with Valence were not working. Perhaps the Valence feature is taking some time integrate with the upgrade.

I read that Roon was having Server issues due to the volume of 1.8 users, I believe they added server capacity, thus your screens started to work.