Roon 2 server keeps becoming unavailable - even though it is running

Since upgrading to Roon 2, I have to keep restarting the server - several times a day. Just now for example, I get the error on my endpoint (Mac) saying “Oh somethings not right, make sure your Roon Core is turned on and connected to the same network”
It is! If I look at the Mac the Core is running on, I can see that it is up and running, but the number of audio devices reduces to just those locally not anything over the network. It’s as though Roon is shutting network access after an hour or so, but stays running. 5 mins earlier it was playing.

If I restart Roon, it will work for a while then just stop with the above error. NOTHING else has changed in my network, same switches, same machines, this has only happened since Roon 2 update. I had Arc working, but again it works for a while util the server become unavailable again.

Obviously if I am out of the house I can’t restart Roon so I can’t actually use it!

Numerous endpoints, Macs, IPad, Auralic G1, iFi ZenStream, iPne
It doesn’t matter what endpoint I use I get the same issue.

One thing that I suspect is that Roon isn’t waking a sleeping Mac any longer - it used to work. So if the Mac goes to sleep after an hour say or non use, Roon won’t start it up again even though I have “Wake for network access set”.

I have found that if I alter the Macs “energy saving” settings to never switch off, then this problem doesn’t arise, so my conclusion is that Roon 2 has broken the ability for Roon to wake a MAcMini running Catalina from sleep, and when it does wake up, because it is forced to by touching the keyboard, Roon is still not accessible and requires a restart, it will work until the Mac goes to sleep again. 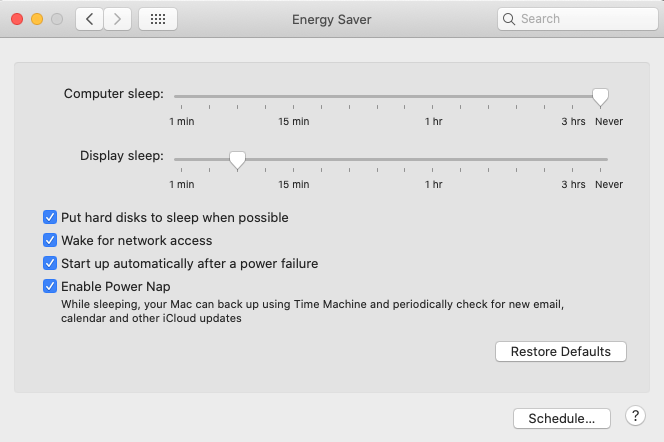 Changes to the software architecture were made between 1.8 and 2.0 and it is my understanding that these changes did in fact affect the way these settings work. The operating system settings will override Roon going forward so once the hard disks go to sleep, access to Roon is lost.

I believe our ability to override the OS previously was a bug or as some might call a “feature”.