According to Discogs there exist three guys named Winston Watson.

This guy is a drummer and worked in Dylan’s Neverending Tour Band. Real name is supposedly Winston A. Watson Jr. according to Discogs. Roon seems to know him as “Winston Watson”.
According to Discogs, he also worked with Giant Sand, but I am not entirely sure of that - see below. 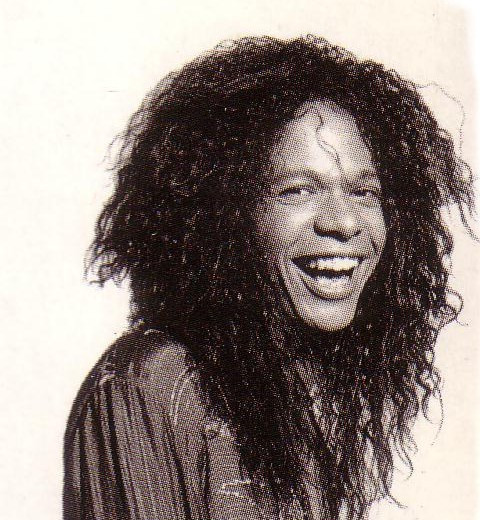 This guy is a Reggae singer and worked in The Meditations and with Bob Marley as background singer. Winston Watson, an original member of the trio The Meditations died Thursday morning in New York.   The cause of death

Confusingly, Discogs cites a third Winston Watson who is a recording engineer from Tucson, Arizona, who also worked with Giant Sand and Giant Sand’s main man, Howe Gelb. This makes sense because Giant Sand stem from Tucson and worked with many local engineers over their long career. I am not entirely sure whether Giant Sand / Howe Gelb really worked with one Dylan drummer of the name Winston Watson in addition to an engineer who happened to have the same name, or whether in fact the recording engineer actually also played drums with Giant Sand / Howe Gelb, and the Dylan drummer never did:

Now, Roon has one artist that has a Valence picture like the Dylan drummer on Discogs, and it says “Member of” Neverending Tour Band. So I suppose this is correct.
(Note: The Pop/Rock genre was added by me, genres are empty by default) 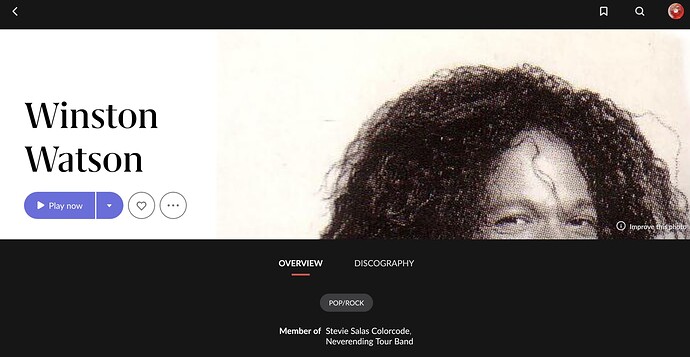 However in his Discography, it contains also works from the Reggae guy, which seems clearly wrong: 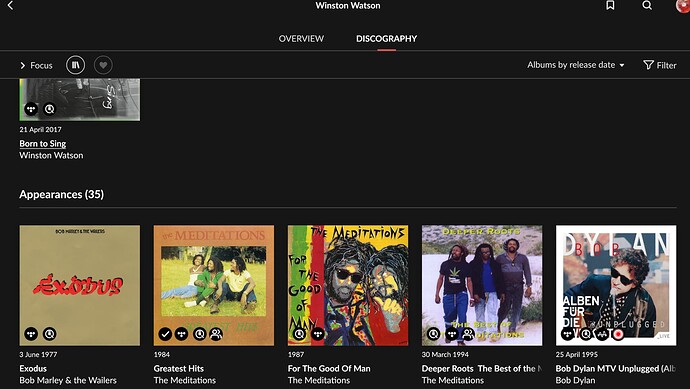 Curiously, the Dylan drummer WW’s avatar does not look like the guy in the landscape picture at all: 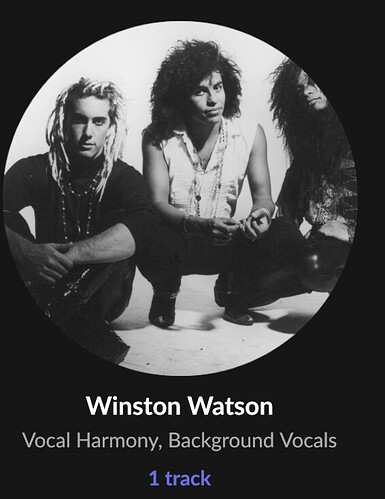 image566×734 64.8 KB
(Note that instruments are Vocal Harmony, Background Vocals because this screenshot comes from a Marley or Meditations album) 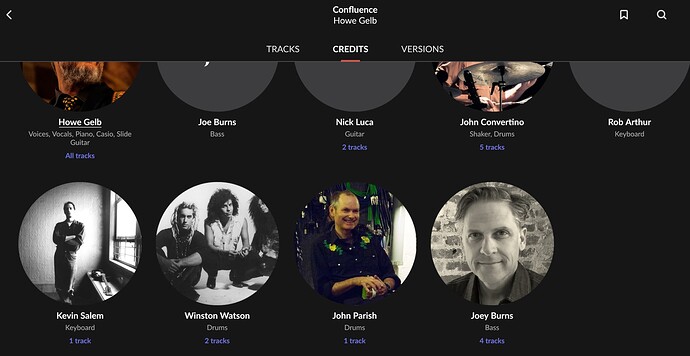 image1920×991 93.1 KB
At this point it may also be noted that the above screenshot shows one Joe Burns and one Joey Burns on Bass. Only Joey is correct.

The Dylan drummer is also credited on a lot of other albums from Warren Zevon to Chuck Prophet. I have no idea whether these are correct.

One additional interesting detail is that he is credited on Me and the Devil by Chris Cacavas & Edward Abbiah. Cacavas once played in Giant Sand, so might be using the same guy.

In the Associated With section, he is associated with some Reggae luminaries: 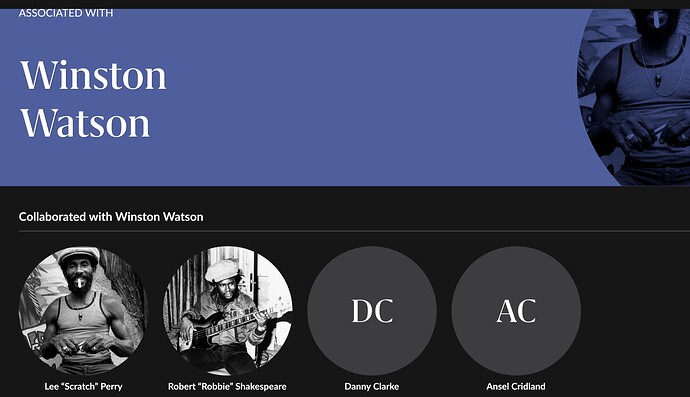 In the Recommended Albums, I have no idea what the associations are and which Winston they are based on:

The Reggae Winston Watson which should be credited on the works as a Reggae vocalist does not exist in Roon at all, which seems clearly a mistake. Albums on Qobuz by The Meditations or Marley have credits for the Dylan drummer.

Roon does know another artist named Winston A. Watson Jr. Recall that Discogs says that this is the real name of the Dylan drummer.

This Winston A. Watson Jr., however, is credited on Ballad of a Thin Line Man by Giant Sand. (screenshot shows unedited Tidal album)

As confusing as it is, the following issues can probably be identified and are fixable on a logical level:

The following might require more information about the artists before it can be fixed:

I might have to bother him and ask Howe Gelb the next time he plays in Berlin.

It seems the same on AllMusic as it is in Roon. It finds the mix of Dylan drummer and reggae singer, and the Winston A. Watson Jr:

The Dylan drummer with the same pic as in the Roon avatar, but tagged with genre Reggae and having Dylan, Marley, and Giant Sand in the credits:

The A. Junior with two Giant Sand credits on drums:

On Tidal, “Winston Watson” has the same pic as AllMusic and the Roon avatar, and in the credits also has Dylan, Marley, Meditations, and others that I don’t know. However, it does not have him associated with Giant Sand or Howe Gelb. There is also an additional songwriter Winston Augustus WATSON that has no associations with anything.

On Qobuz, there is one Wintson Watson, associated with just one album as primary artist, Born to Sing. It is tagged as (and is) Reggae from 2017. This same album is also associated with the Winston Watson on Tidal and in Roon

I did make some edits to the Marley, Giant Sand, and Howe Gelb albums in the past, and also the artists, but I did do my best to make the screenshots all show unedited versions. So if I didn’t make a mistake, you should be able to reproduce it. I also tried to make sure that screenshots only show versions from online streaming (I have many local ones for Giant Sand / Howe Gelb)

All screenshotted albums are identified

I tried to do all screenshot from Tidal. Spot checked the Qobuz equivalents as well and they were the same. My local albums of Giant Sand and Howe Gelb are similar, where they received Winston Watson credits from Roon. 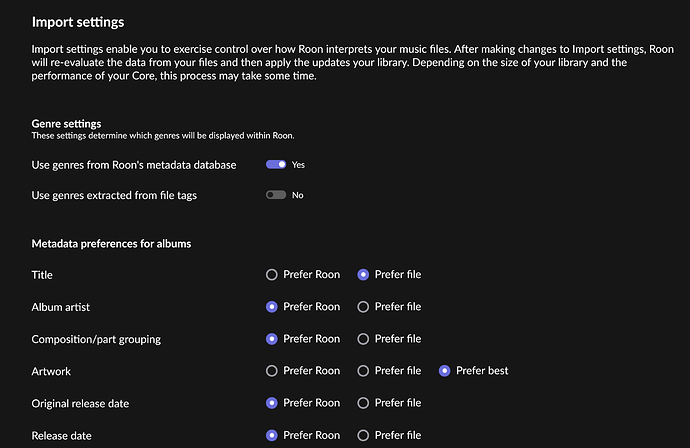 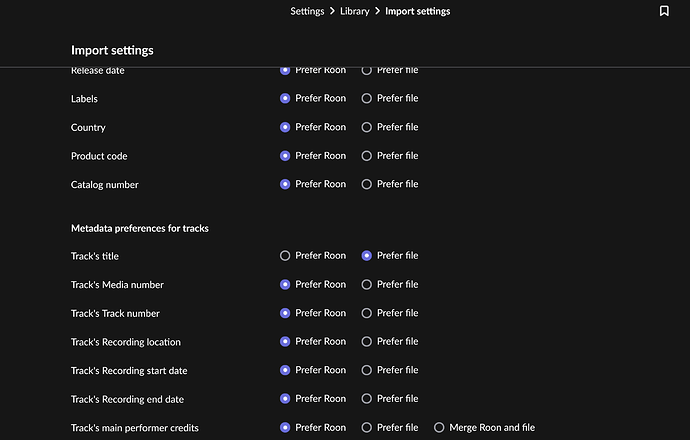 Thanks for the detailed description, I know the problem too and when I want to keep something apart, Discogs is usually the source.

Yes, there are many problems with artist equivalence and posts about it. This particular one is an annoyance to me because I’m a fan of Dylan, Marley, AND Giant Sand, and I can’t fix it locally because I don’t know enough about the Dylan drummer and where he really played.

I believe Roon staff kindly forwards these things to the providers and they tend to fix it. I would report it myself, but this one seems too complex with too many unknowns to me, so I would not want to mess up AllMusic

And I’m serious, next Howe Gelb concert I will ask him!

Actually the banner and the avatar in Roon for the Dylan drummer, although they look so different in Roon, are both consistent with this photo of a band that Discogs says he played in, and the man from the Roon banner is clearly the man on the right in this photo: 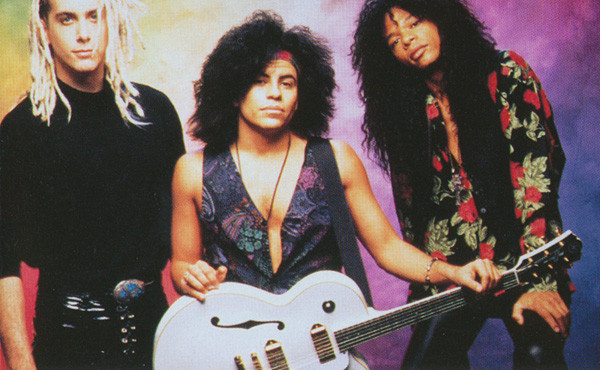 Thank you for bringing this to our attention. As always, we appreciate the heads up and your assistance.

We’ve reached out directly to Rovi/Allmusic to request a review of each of the entries for Winston Watson for equivalence issues. Please understand that we can’t make any promises regarding a timeline for their review or corrections. They generally address our metadata corrections fairly quickly.

Understood. I have since found out a bit more via Allmusic’s Giant Sand and Howe Gelb artist bios, which had escaped me before

There is clearly good evidence that the Dylan drummer (Winston Watson #1, probably equivalent to Winston A. Watson Jr) is the same guy who played with Giant Sand / Howe Gelb. There is even an album by Raisins in the Sun, which puts him on drums, and this bio draws a connection of Raisins to Tucson, AZ, and hence Giant Sand by implication.

This all makes sense.

He may well be the same as the recording engineer from Tuscon, Discog’s WW #3, and Discogs may be mistaken when splitting them.

The remaining issues then would be:

Pls also note that I discovered that the artist photo for Dylan drummer WW#1 is my own edit (using the photo from Discogs). The Valence photo is different and the same as the Roon avatar. 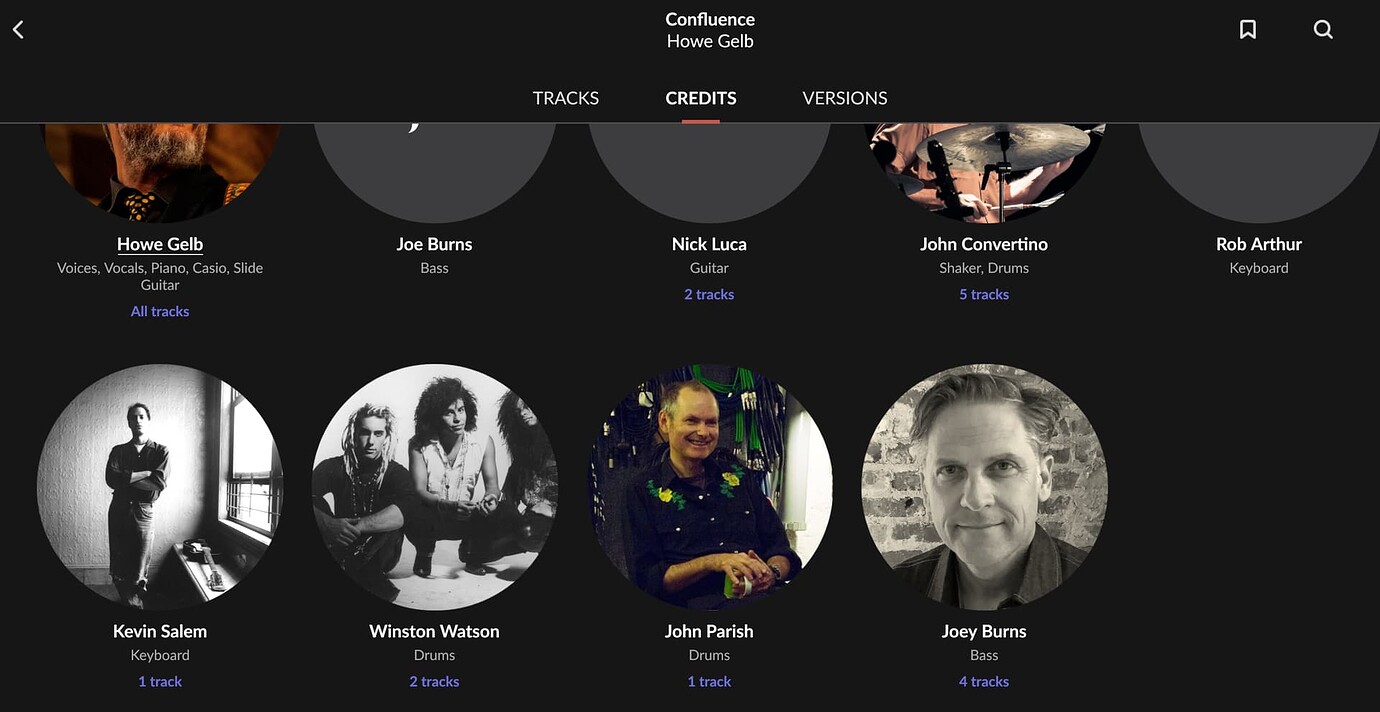 I also found a few Watson details on the Dylan superfan site (Expecting Rain) Seems like someone else may have beaten you to your question for Howe Gelb!

Thanks! Haha! “I had a chance to talk to his neighbor Howe Gelb today” seems to settle it

Cool. My wife’s sister actually knew Howe decades ago and I was already about to call her and ask if they are still in contact

Current additional evidence is in reviews in Roon for the 2018 and 2019 Giant Sand albums, Returns to Valley of Rain, and Recounting the Ballads of Thin Line Men, respectively. The reviews also link to this Dylan drummer Winston, and being current and quite extensive this is surely also correct.

[Edit: Well I should have looked more carefully at the HG bible to begin with, sa-wa-ro.com. Picture from the Returns to Valley of Rain album info with Howe and Dylan drummer: 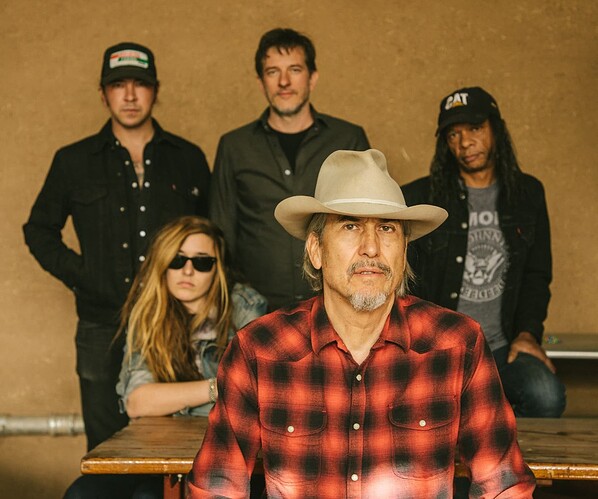 Allmusic just have to separate the Reggae guy and merge W. A. W. Junior with the Dylan drummer. Awesome

My editing quest through GS/HG is currently in the year 2000, so I had not seen this yet, but looking at later GS releases now, this is not good for their later bass player:

These are all the same guy, all artists coming from Roon and unedited. And they are distributed randomly over GS and HG releases. The one in the second row is listed as member of Melted Wires, another Howe project, and if you go to Melted Wires, there is a pic with Howe. But the middle Thøger T. Lund in the first row was graced with a picture

Uh-oh, there’s another one with a broken character when searching for T Lund: