Recently purchased Roon as I love the interface and was looking forward to playing my DSD files via my hard ethernet wired CXN. My core is my QNAP server where all my files.
Big disappointment that I cannot play DSD with Roon and CXN. Only can play via Airplay even though all connections are ethernet.
I have basic knowledge but I would really appreciate some suggestions as to what hardware I could purchase to enable me to play DSD with Roon from all my MAC devices.
I can play DSD with the CXN via external HDD connected to front CXN USB port and with CA App (and other apps) but not with my expensive Roon apps and service.

It is UPNP not a Roon compatible endpoint, how about adding an Allo.com USbridge I use one to connect a Chord Hugo2, it is a great little device.

CA looks like they will not be going Roon Certified until Roon is “bigger” in a recent reply.

There is another CXN thread at present about connections btw

I have put a RPi in between but the CXN isn’t being seen by Roon. Even then the best you will see is 24 192 maybe even 24 88,2. So I still get AirPlay as best at the moment. I still keep my. JRiver library live to stream DSD and SACD ISO and other hi res sources

Not too positive a reply I am afraid

Thanks Mike, sounds like a decent suggestion. I was getting DSD playback (I think) via Audinirvana) . I’ regretting Roon as it seems JRiver and or Audinirvana can play DSD with the CXN and Apple devices.
Cheers

I know it’s contentious BUT

I have RPi>USB>Audiolab MDAC > Sennheiser HD800 as my main system these days . I find it very difficult to spot the difference between 44.1, … 192 …DSD

It’s more to do with Remastering on newer recordings of old material than repro per se I suspect. On speakers I was quite happy with AirPlay via the CXN

No, that’s incorrect. The USbridge is transport only, i.e. an endpoint to connect your DAC. You need two other components: Roon Core, which “streams” the music (media files may be local or on a network share), and a Roon controller, e.g. iPad.

It seems that your NAS is the Roon Core, so all you need is an endpoint to connect to your CXN. Allo USbridge is just one choice. Since you have SP/DIF on the CXN I think you should look at the Allo DigiOne. I use this with my Chord 2Qute and you shouldn’t have any limitations with sample rate.

According to the review (see below) DSD is only supported at DSD64 and only via the USB input, so I would advise the Allo USbridge If you want native DSD, the digione will be fine if Roon converts the DSD to pcm.

The CXN also features Spotify Connect and internet radio, so you have access to a few million songs from around the globe. File support is extensive: all the popular formats like WAV, FLAC, AIFF, ALAC and MP3 are supported, as well as DSD 64 files (which you can only play using the back-panel USB input).

All digital inputs on the CXN are capable of playing high-resolution files of up to 24-bit/192kHz, and they can be upsampled to 384kHz, too. That includes the USB type B input for your laptop, and the optical and coaxial inputs. There’s also a pair each of RCA and balanced XLR outputs, along with two digital outputs.

Thanks Martin, so in the set up you mention above the Allo DigiOne is the end point after the CXN and the All DigiOne plays the DSD via Roon ? Example: Phone App - Roon Core - CXN - All DigiOne

Thanks Ratbert, It seems the front USB plays DSD too - according to the CXN readout anyway while playing.
Bloody confusing all this stuff!

From a disk using its own interface I believe?

Thanks Martin, so in the set up you mention above the Allo DigiOne is the end point after the CXN and the All DigiOne plays the DSD via Roon ? Example: Phone App - Roon Core - CXN - All DigiOne

Not Martin, but chiming in quickly.
The playback chain in this example would be Core - DigiOne - CXN. The DigiOne would connect via Coax or optical to your CXN.
You wouldn’t be able to play native DSD in this setup, as the DigiOne doesn’t support it. Roon would convert DSD to PCM. I’m not sure if DoP would work, probably someone else knows this.
I use similar setups with an AV receiver and a Schiit Modi, they both work very reliably up to 192/24. I didn’t try higher bitrates, as the receiving DACs don’t support it.

The end point is effectively a Network to USB converter

This is the signal path for a DSD . Its a SACD ISO converted to DSD 256 (with JRiver) and played back to the RPI and Audiolab MDAC 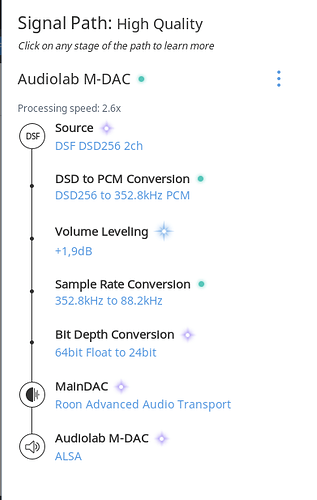 The M-DAC has a limit at 96 on USB but the processing always produces 88.2. I converted the same ISO to DSD 64 and I get the same Signal Path . IT doesn’t even get to the maximum available for the DAC. Somewhere on the forum is an explanation why ?

@Kopftelefon has answered correctly … so with the DigiOne you’d have something similar to this depending on device setup: 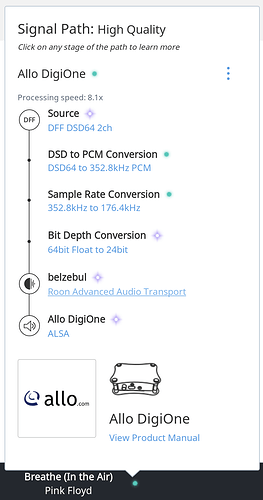 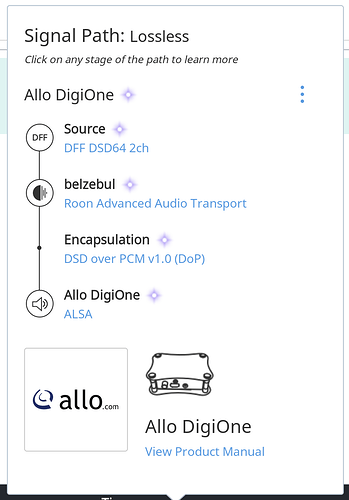 What’s the difference in setup between these?

The first converts DSD to PCM, so isn’t bit perfect. The second uses another method–I don’t understand the details–that delivers a bit perfect stream to the DAC (which I think is recognised as DSD albeit the colour on the 2Qute is more of a blue-grey than grey.)

However, as @Ratbert says, the CXN doesn’t support DSD over S/PDIF.

Unfortunately for you, you need to decide between Raspberry Pi (DigiOne) and Sparky (USbridge) as these “hats” aren’t interchangeable. I found USB on the RPi to have occasional clicks and pops at higher sample rates, which is why I opted for the DigiOne–I already had the RPi. The good news is that they’re a cheap way to build a transport.

There’s also another way, but I’ll defer to someone more knowledgeable on these matters … I’d rather listen to the music! 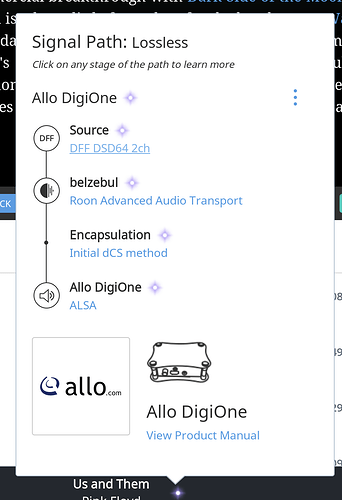 I use a USbridge into a Chord Hugo2 into Stax Headphones and have not experienced any clicks, not disputing what Martin says just giving my experience.

To be clear, the clicks and pops are with the Raspberry Pi not USbridge.

Thanks Mike, these answer are so detailed and much appreciated. Your right though - very confusing.

It seems it is simply not possible to find any hardware set up that will play DSD from Apple devices over a Ethernet connected network using Roon. I really like Roon but I’ve done my money I reckon. I do notice the sound difference on my Analogue Production DSD files played via CXN USB DSD when played via Roon airplay (Ethernet not wireless) CXN