First off, I don’t know squat about Dietpi, Raspian and method to program or to set them correctly.
My new Audiophonics Sabre kit uses a Dietpi 6.31 Evo Image which I successfully installed. Both displays work, but there is no Roon bridge functionality that I could find. After some research I found this tutorial and added only the commands in the section configure RoonBridge after installing RoonBridge from the DietPi software repository

First trouble: I do not know how to ’ 3. Set Roon Bridge to run at boot time and start it immediately’

and the DAC showed up in my Audio settings on Roon core, but enabling it produced an error ‘Device not found’
I tried a DietPi 7 fresh download, only thing I did to it apart from a few basic network and time settings was to install the Roonbridge and start it with the systemctl commands and voila it worked. No second display unfortunately, but the Roon endpoint worked with volume control etc.

Does anybody have a dummies guide to make a Roon bridge work on an existing image? 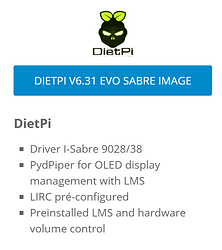 Thanks for the insight, I am a total neophyte in these things. LMS = Logitech Media Server…oh well, something I did not know

I am in contact with Audiophonics but not a lot of enthusiasm on their end to fix it.
Currently I am using Ropieee with the Sabre DAC and it works nicely as an endpoint, but no second display unfortunately.

Audiophonics told me that I can add Roonbridge service to the dietpi image. Well, back to my problem from post 1. I successfully installed the roon bridge program from the DietPi repository, but do not know how to get this into the autostart mode. Anybody in the know to help a complete uninitiated out?

I don’t have an answer for you yet, but I’m willing to poke around at it as my next project.

I’ve just started getting into streaming audio in the last few months. I dipped my toes in with an iFi Audio ZEN Blue, streaming via Bluetooth from my Mac, but wasn’t impressed by the sound.

I tried the Audiophonics Sabre kit next and started with the Volumio image on it and that worked pretty well, including using the dual displays.

I wasn’t super-impressed by the Volumio interface so Roon was my next stop in the journey. I built my own fanless, passively-cooled Ryzen 7-based Ubuntu Roon Core server and activated the Roon Bridge mode on Volumio on the Audiophonics Sabre, which is as easy as checking a box on the GUI. There are two flaws, however: first, I’m not thrilled paying a monthly fee to Volumio when the only function I’m using it for is the Roon Bridge. Second, while the second display works when connected to the Sabre via Volumio (native), it is blank when I connect to it in Roon Bridge mode.

I’m not sure what the next stop is: to try RoPieee, which doesn’t explicitly list the ES9038Q2M as a compatible hat (though the ES9028Q2M is listed), or to go the path you’re forging with DietPi. I don’t speak French, so much of Audiophonics’ forum material is lost on me. Several experiments are ahead to try to figure this one out!

The Ropieee works well with the ESS dual 9038 Q2M, but does not support the second screen.