System up until yesterday was working well, with Roon basically being predominantly used by two main devices, the Cambridge Audio 851N and my iMac. Both connected to the Linksys WiFi.

What changed was that before yesterday, the NUC with ROCK was connected via Ethernet to the Linksys master node. However due to the installation of WiFi in the garden office, the NUC was disconnected (sadly whilst on) from the Master Node and connected to the router directly (and the router stayed constantly connected to the Master Node by Ethernet). However since then, when connecting to Roon on various devices (iMac, iPad, iPhone), it no longer recognises many audio devices on the network, only seeing those on Airplay, Chromecast or Sonos. It no longer sees the 851N or the iMac. On the audio section in settings (see image) it lists a load of options I don’t recognise and just those on Airplay or Sonos.

So removing the Ethernet connection from the NUC to the master node and plugging direct into the router seems to have caused an issue.

It looks like I can access the full library as before, but I can’t play them on my audio devices. Any help would be appreciated! 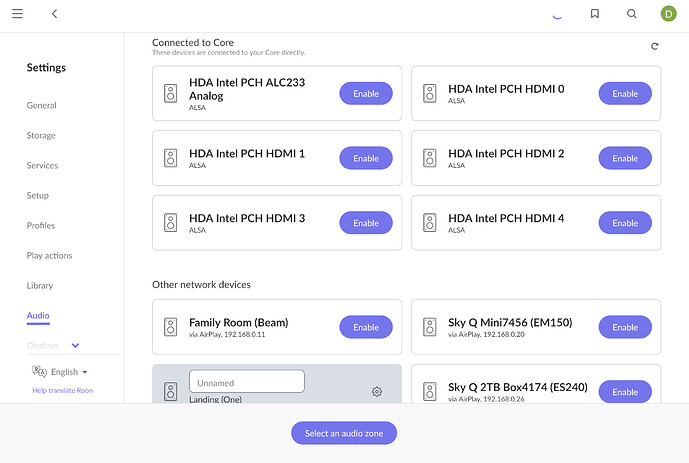 I believe that the Velop Mesh system sets up its own range of IP addresses (both for WiFi and for the ethernet ports used for equipment in the units) in your home network, and these are separate from those used by default by your Virgin Hub router.

It may be that your NUC got locked on to the network address range of the Virgin hub.

I would have thought that moving the NUC back to the Velop, and then rebooting the NUC would have sorted things out. Has it not done so?

Thanks for the guidance, really appreciate it! The Velop only had two Ethernet connections, one from the router and the other to the garden office. So I bought a gigabit Ethernet splitter and put the connections to the garden and NUC through that, and it’s working again.