Thanks, that worked well. File name is wattsintheroom.rar. I’ll generate another later on today maybe with just 1 day instead of 30. Because it crashed again early this am.

Ok, in light of the fact that it crashed this morning, I’ve uploaded one days worth of logs. File name is wattsintheroom12-2-2019.rar.

Thanks, @Peter_Atkins. I’ve sent the latest event viewer logs over to the team for investigation and I’ll be sure to follow up as soon as I receive their feedback.

So, It crashed again at 6:32AM local time. In the logs, I’m seeing .net runtime errors associated with the log errors. Is the Roon core dependent on the .net libraries? According to the logs, my .net runtime version is 4.0.30319…

I met with the team to discuss this, and based on what they’re seeing, it looks like there might be an issue with the storage locations being used by Roon. There may be system files being watched that are causing this to occur.

Starting out, can you share a current screenshot of Settings > Storage? Has it changed from the above screenshot: 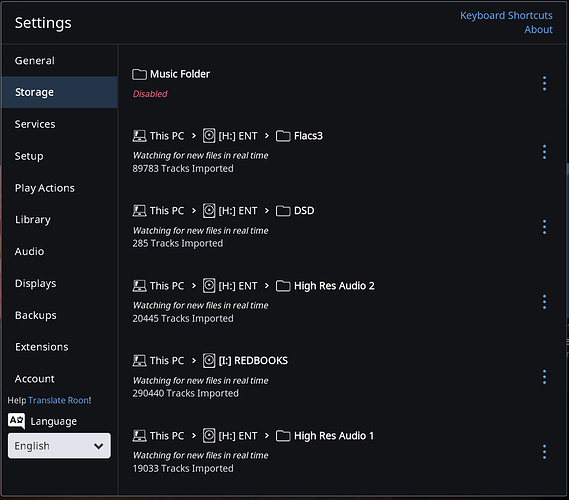 If you completely remove the I drive, not just disable, is there any change?

Can you reconfirm the system specs…looks well below what an even 3yr old Gen. chip is going to do. 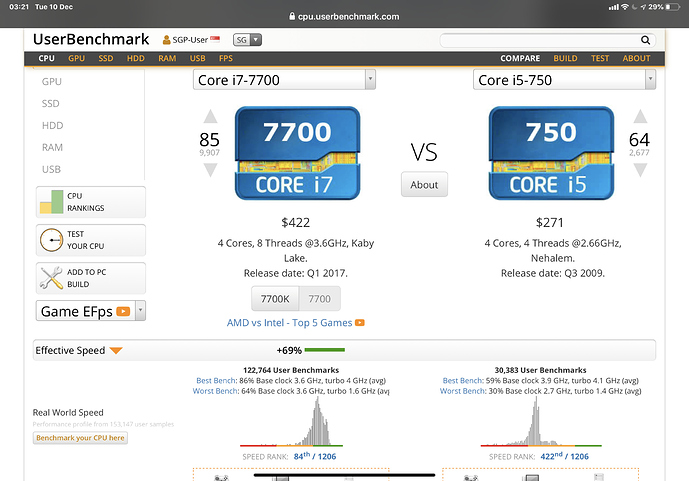 My disc layout has not changed since that screenshot. Over the years I’ve seen a lot of hard drives come and go. I’ve never lost any of my audio data. Well I have, but I’ve been able to recover from backups. I don’t think the I drive has problems. And, it will cost me if I remove it from the system. The database will nuke almost 300,000 tracks worth of metatdata, and at some point I’ll have to either scan it all again or futz with a Roon backup. I’m not that desperate yet.

And it is indeed around 10 years old. I’m proud that I have not been on an update treadmill in the last 10 years. If it isn’t broke, don’t fix it…

Just to see, and ran some experiments with the task manager. The file names tell the story. Some of them are not light loads, but they are not show stoppers. 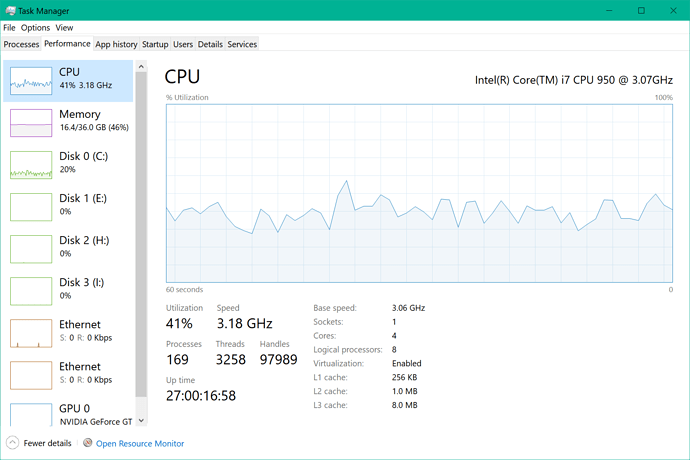 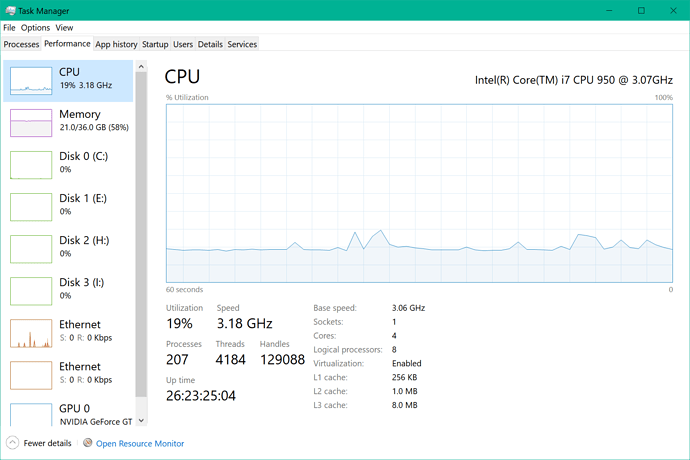 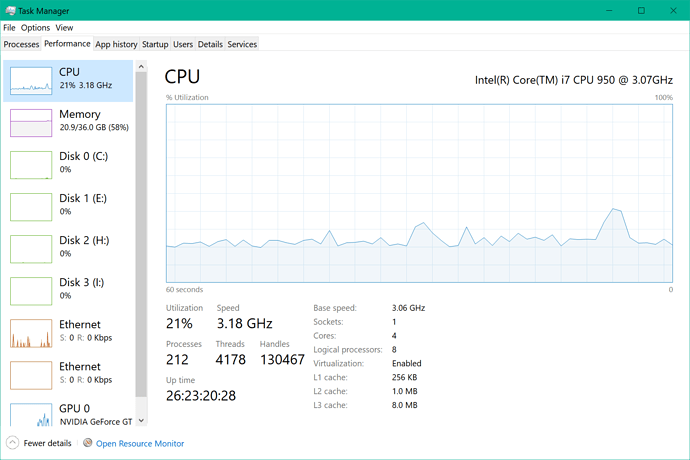 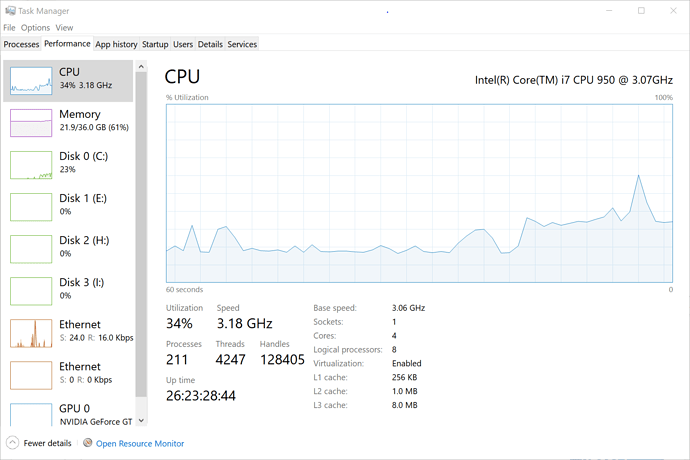 I have had a lot of older systems (many just given away) in the last few years that roon just could not work on no matter how much I wanted it too…and that was with a library half as much as yours.

You are in good hands with Dylan anyway.

Do any of the watched folders seen in Roon contain anything besides audio files?

Just audio files with the exception of the odd *.pdf, *.nfo, *.accurip, *.jpg and *.png. Just miscellaneous files that go along with audio files. Those 2 discs are dedicated storage for my library.

I spoke with the team and there are a couple of things we can try here. The logs are showing that there appears to be an issue with the at least one of the drives and Roon’s interaction with it.

While removing the drives, starting with the I drive would still be something we recommend testing, we’d also recommend turning of both Analysis settings in Settings > Library and seeing if the same behavior occurs when analysis on the drives is not running.

That is easy. Several FYI’s; Roon crashed again early this morning, Unattended while I assume nothing was going on. 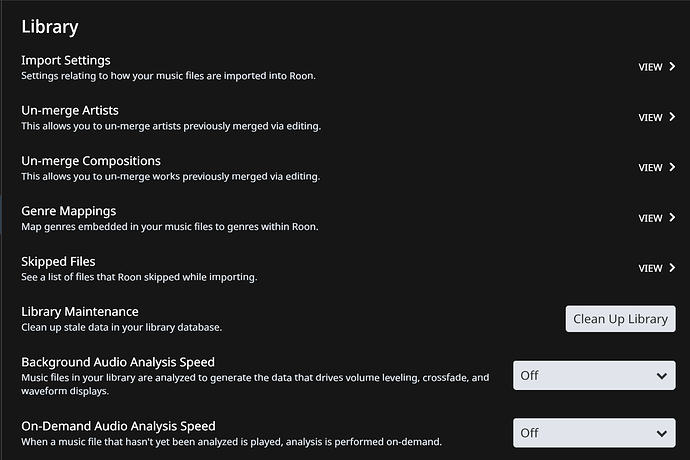 Thanks, @Peter_Atkins. That helps to rule that out.

Moving forward, as suggested above, we are interested to see if there are any changes when removing some of the watched folders from Roon, starting with the I drive. You can make a backup before doing this so you can always revert back to before you’ve made these changes as well.

Let me bounce this off of you with what I am planning with a slightly different scenario. I have a new disc on the way (should be here tomorrow). I plan on filling it with all the data that is currently on the I: drive, and then replacing it with the new. And, then see what happens.

This fits in with my scheme of retiring drives to do backup duty, only be spun up when refreshed, both for the near line and offsite backups.

Oh, and by the way I actually witnessed a crash a few days ago. That had not happened in quite some time. Anyway, I had focus on Roon, the music was paused and the curser hourglassed for something like 5 seconds, and the Roon just vanished as if one had hit the X. Maybe not too much to go on but something. One more clue is that Roon always goes back to where it was after these crashes.

That would certainly be a good test to help us rule out possible drive issues. If there is something in the contents of the drive this might not necessarily change anything, but this will allow us to verify whether or not this is caused by other drive issues.