With only 1 GB of memory and an Atom dual core CPU I’d say no, it is not sufficient. A quad core Celeron with approx. the same clock speed and 4 GB memory is probably the lowest one should go.

It’s low on memory, so was my DS218+. You can upgrade the 713+ memory by opening the unit and replacing the 1Gb module with at least a 4Gb one. You can google for Crucial memory for the 713+. keep in mind that by opening the unit, you loose your factory warranty. The Atom CPU will work as long as you don’t use DSP to heavy. Check this for memory upgrade (in Deutsch!!!)

The DS218+ has a dual core Celeron J3355. I don’t think it is much different in power than the Atom

I know memory will help. I actually used an old Netgear NAS with a D525 Atom and 1 GB ram with Logitech Media Server (and Brutefir convolution) for a few years before moving to Roon. I have not tried Roon core on this NAS as the Linux version is far too old.

The J3355 has similar performance to a D2700, yes. I was thinking of the J1900 which is a quad core Celeron with support for up to 8 GB ram (used in the Qnap 251+) The Celeron processors have a 2 MB L2 cache while Atoms have 1 MB. How much this helps I’m not sure. SSDs for the Roon data base will surely help for all.

The Atom CPU will work as long as you don’t use DSP to heavy.

There are other considerations. Library size is a big one. Number of simultaneous streaming endpoints another. All have similar hits to processing.

I have Synology NAS that has J1900 Celeron CPU of Intel with 8GB RAMs.
Could it possible that i can install and use the Roon Server witn no lagging or slow.
I would control this NAS from my tablet.

Thanks for your advice in advanced.

I think it should work.

Way under the recommended specification by roon which is an i3.
This processor Vs the i3 in a nuc.

I have Synology NAS that has J1900 Celeron CPU of Intel with 8GB RAMs.
Could it possible that i can install and use the Roon Server witn no lagging or slow.
I would control this NAS from my tablet.

Thanks for your advice in advanced.

Hi Jay,
it should run on that specific Diskstation. As @ged_hickman1 noted, due to the cpu power of the J1900, cpu intense tasks, such as upsampling (if needed) might have insufficient processing power.
For regular playback, the cpu should be ok, even though the initial library scan might take longer.
You can always give it a try. Your Roon license is not bound to a specific device and can always be activated on other devices in the future.

Hi Crieke,
Thanks for your advice.
I agreed your opinion .
Now i’m thiniking upgrade my NAS board to X11SCV or buying NUC.
Thank you again.

I can see clearly what’s your saying.

Personally I don’t understand this whole story about “Core needing so much power”. I got Synology DS1618+ with Intel Atom C3538 (not even i3 or something “recommended”). The usual CPU Usage of Roon Server on my Synology is around 1,5-5% (!!!). Sometimes it goes to 8-9% percent in peaks. And I got running DSP with EQ and Headroom Mngmt + Chromecast Display. I believe any modern home/SME NAS shoould be capable of running Roon Core easily. 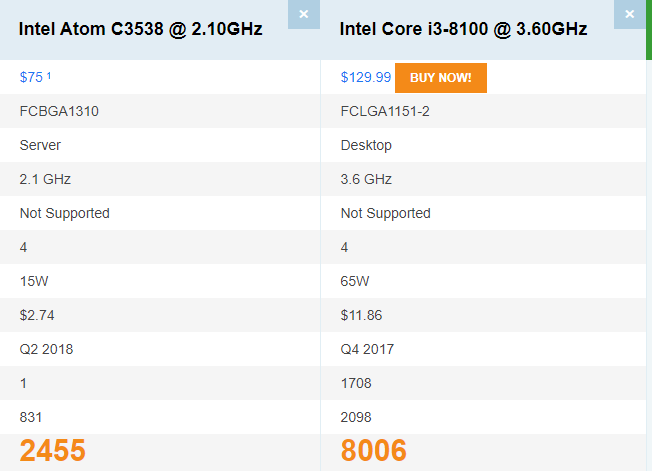 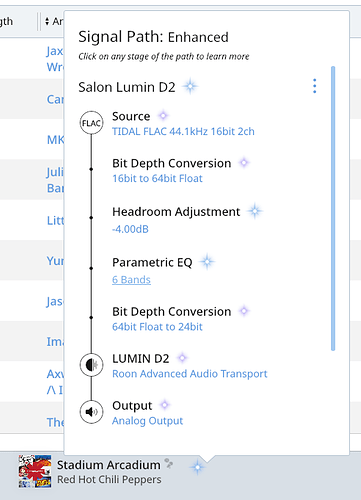 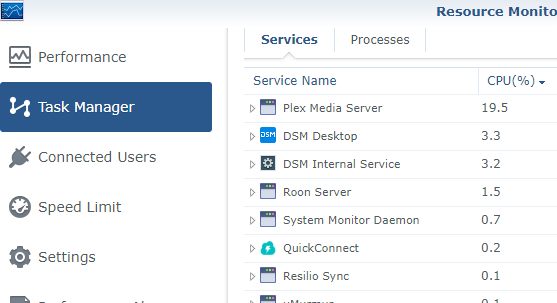 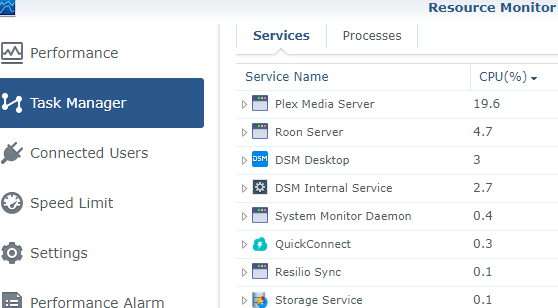 One personal experience versus the people who wrote the software, now which source would you expect people to use as advice when asked?

On https://roononnas.org/en/synology/ I see that Synology Roon Server installation file is dated as 2018-03-07. Is Roon Server for Synology up to date with the rest of Roon component versions?

Recently (on January) I shared with you my experience with Roon Core on Synology DS1618+ (Atom C3858 processor). Today please let me share with another practical solution used for the last months.

In the end I migrated Roon Core directly from Synology DSM (linux type) operating system for 2 reasons:
1.) I’m using Virtual Machine on my Synology DS1618+ for some other reasons. As we know Virtual Machines and vSwitch functionality doesn’t work well with Roon Core on DSM system regarding devices discovery (Chromecast and AirPlay devices from my experience) so I couldn’t cast Roon into AirPlay device and Chromecast display.
2.) I’m running Windows 7 virtual machine on my Synology DS1618+ anyway for some other reason so for me there was no additional hussle to use Windows 7 on DSM to install Roon Core for Windows for home network setup.

So how is the performance? Actually it is also absolututely non-problematic! 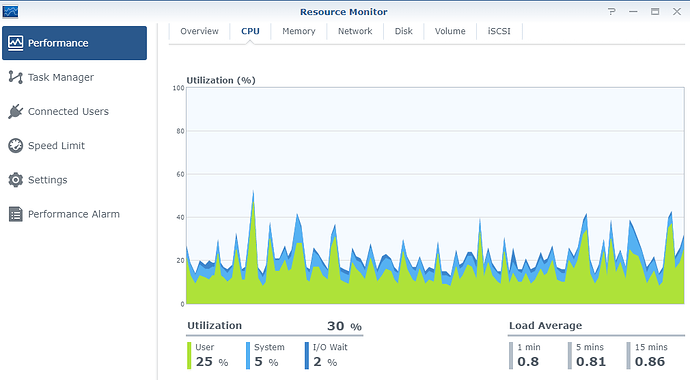 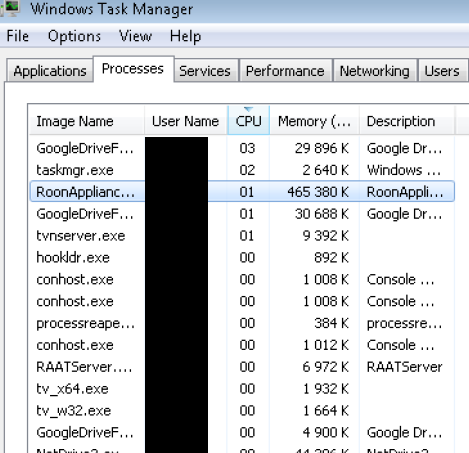 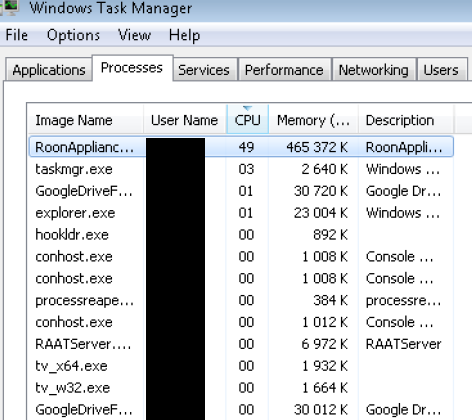 So what’s the take away here? According to my experience Roon seems quite capable on running NAS Synology devices without any issues. My suggestions to anyone willing to do so:
1.) If you are NOT using virtual machines on DSM then install Roon Core as DSM application according to the half-official Roon on NAS installation guide found on Roon website. This is the most powerful way of running Roon Core on Synology. I guess it should run on most modern Synology devices including less powerful Intel Celeron devices.
2.) If you a/ need to run virtual machines or b/ you don’t feel comfortable with installing Roon on DSM directly you can go for Roon Core on DSM Virtual Machine without any issues as presented above.
3.) What system for virtual machine? You could go with linux or Windows 7. If you are not feeling comfortable with linux systems then go for Windows 7 virtual machine (which is relatively easy to setup in GUI on Synology - it does not require strong techical skills) and use Roon Core on Windows 7 which is the simplest way ever to get it on NAS.
4.) DON’T go for Windows 10. The performance penalty coming from system overhead of Windows 10 vs Windows 7 is huge. Windows 10 is too much for virtualization on Intel Atom/Celeron. Windows 7 runs quite smoothly and is fully functional as Windows 10.

Remember, that if you don’t need Windows 7/Linux virtutal machine for any other tasks just install Roon Core directly on DSM. It’s the most effective way performance-wise.

Another datapoint to add here in case anyone was considering trying this.
I have had success with running Roon Core on a Synology DS216+ii (1.6GHz Celeron w/ 8GB RAM).

The model is even less powerful than @Krzysztof_Kowalski’s DS1618+ and Roon Core only uses 1%-5% of the processor when streaming Tidal to a single endpoint. The sound quality is the same as Logitech Media Server running through the same chain. The instructions at https://roononnas.org/ were all I needed to get going.

Hat tip to @crieke for making the NAS packages. He’s saving us from having to splurge on a NUC or Nucleus.

Shouldn’t be the sound quality be better than Logitech Media Server?