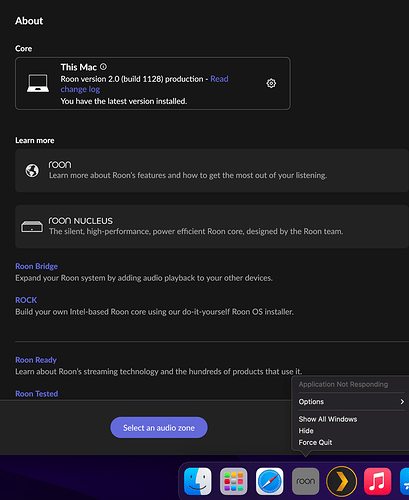 For the last few days I have either found the Roon core on the dedicated Mac Mini either unresponsive or actually crashed on frequent occasions. A restart of the Core gets everything up and running again for a few hours before I get the dreaded " Uh Oh somethings wrong message" again and yet another restart is required. Hoping that some light could be shed on my problem. I have logs but can’t attach them.

Can you monitor memory use? It looks to me that 8gb isn’t enough to run a full OS and a pretty big Roon database.

Thanks for the reply. It’s something I’ll look into, however Roon has run flawlessly for over a month since I started using the M1 as core, it’s only in the last few days that issues have cropped up.

Here is memory use at the moment. Appears to be some in reserve. 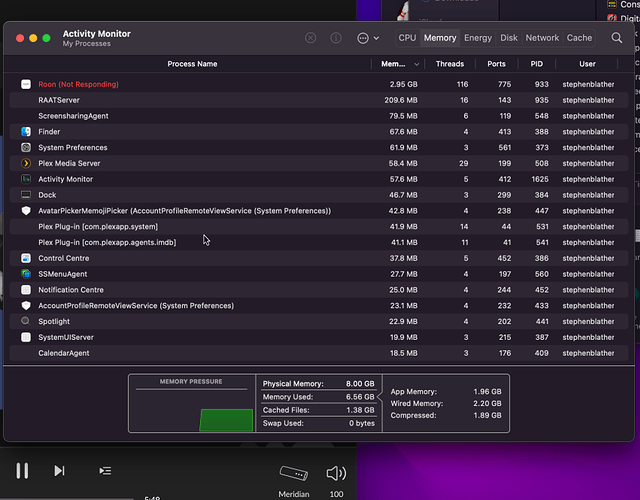 Roon core is now crashing every 10 to 15 minutes even when not in use. It has become totally unusable. Apple will be sick of reading the crash reports!

There will be little or none in reserve there after memory assigned for graphics is taken into consideration. I’m no expert but it seems you have a memory leak there somewhere. It might not be caused by Roon but because Roon appears so memory intensive it is what is most impacted by the issue. Hopefully Roon support will be more helpful but they are not back until Tuesday are they?

It’s a total mystery to me as to what is going off. Other than system processes there is only Roon and Plex server on the machine and Plex is not a memory hog. I might try a clean reinstall and recover from and older back up just in case Roon has somehow become corrupted.

Keep us posted, I have crashes too but probably unrelated to yours.

Will do! I did a clean reinstall of Roon core and thought I’d cracked it but I’m afraid it all crashed again about 5 hours later and has carried on doing that since. I suppose it’s an improvement on on every few minutes but it really isn’t ideal to have to send a crash report to Apple and relaunch Roon 4 or 5 times a day. Hopefully support will get to my issues soon.

Your issue sounds very similar to the one I reported on this link: https://community.roonlabs.com/t/roon-2-0-constantly-crashing/216986

I am also running an 8 GB Mac Mini on Monterey 12.6. It was very stable on 1.8 - however, I did find that due to memory leaks I needed to schedule it to restart every day. After that, no problem in 1.8. The Core will not run more than a few hours without crashing under 2.0, whether I am playing music or not.

I have also had some less frequent but similar crashes on my MacBook Pro remote. This is a new M2 Mac Book Prop with 24GB. If running out of memory is what is causing the crash, then 2.0 is misbehaving pretty badly.

It’s exactly the same issue and it seems as though many others are having the same problem. So knowing how sluggish Roon support is at responding I have downgraded to 1.8 and guess what… everything works as it should. ARC was nice but Plexamp works just as well away from home.
I’ll wait for 2.1 and hope that they have sorted the ■■■■ show out.

As a good next step, if you could please upload the full Mac OS crash logs to the link here, that would be helpful.

Well Ben, I’m not sure where I would find the crash logs as they are probably lost in the mist of time between my initial plea for help and a response.
Luckily for me, I took some self medication and went with a tip from another member and installed Roon server rather than the full fat version. Since then absolutely no issues at all! It would seem that, in my case, anyway, the problems lay somewhere in the UI. It would be interesting to know if this was the cause of all the other similar issues being reported.