Roon Does not auto-scan my library on changes / deletions / additions

I have been discussing this case with the technical team and it sounds like there are two issues here:

Let’s focus on the second issue:

HI @noris, thank you for further investigating this.

Ad 1.) My NAS Settings say SMB3. It has an Option “Do not allow earlier SMB Versions”. Shall I activate that one?

Ad. 3.) I am using Metadatics for Mac since many many years. Never a problem. Changes get picked up for example in MinimServer. 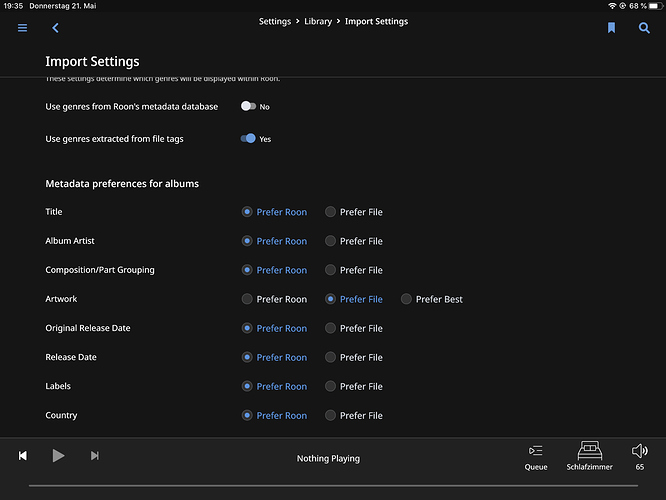 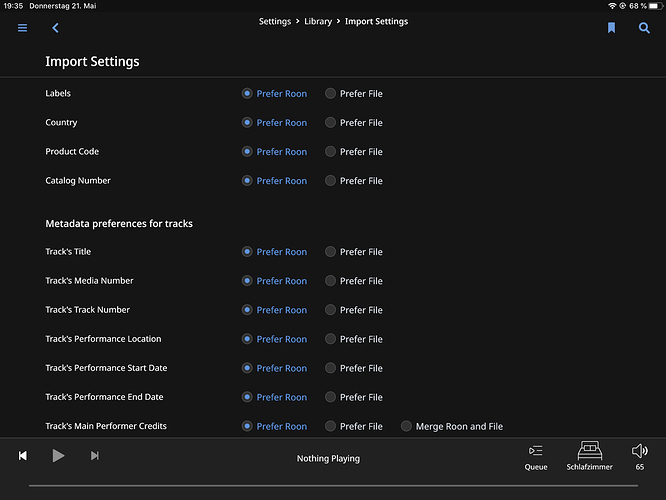 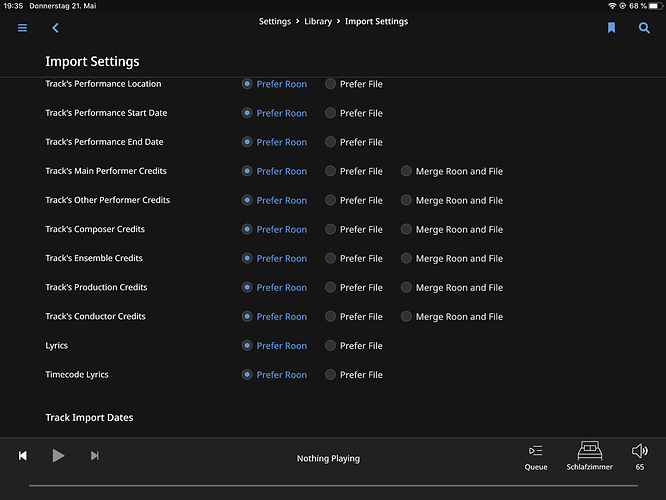 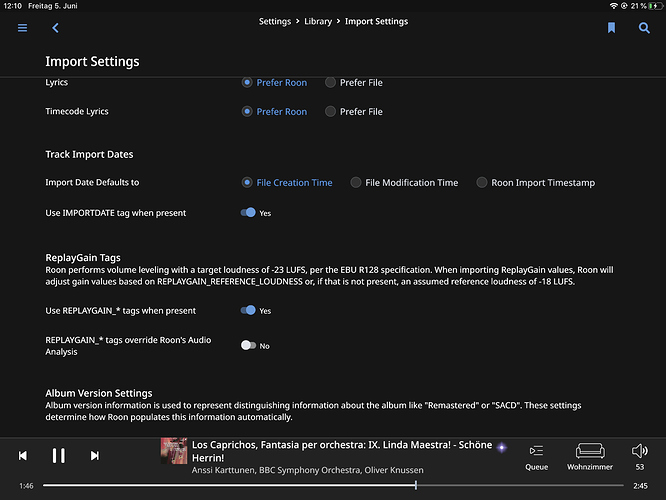 Ad 1.) My NAS Settings say SMB3. It has an Option “Do not allow earlier SMB Versions”. Shall I activate that one?

Yes, please activate this option, just to remove the usage of old SMB protocols from the equation.

For Import Date, I see you have File Creation Time selected, can you try to use File Modification Time instead?

thanks, I have changed the NAS setting not to allow older SMB versions and set “File Modification Time”. I’ll let you know if this improves anything.

UPDATE: While my Roon folder keeps prouldy advertising “watching for new files in real time”, this continues to be “fake news”. The two changes done yesterday have unfortunalty not changed anything.

I purchased three Albums form Hyperion and added them to the library. Nothing happened. They got only recognized after another “forced rescan”.

If you are still using your NAS, then it doesn’t report changes in real-time, which is why you have an automatic re-scan interval. Did you wait for the interval to count down before you did a forced re-scan?

That “watching in real time” message is an assumption that all networked attached storage will report in real time - not all NASes do, as you’ve discovered.

No point in sitting and waiting for the next re-scan in 4 hours… I f i add music, I want to listen to it straight away.

Anyway, I get back on that other question regarding internal SSD: Whats the best format to format that drive. It is not saying in the KB article…

It’s an appliance - just format it with the Web Administration interface. Jeez…

Is minimserver on the same Nas. If so it will pick it up as it’s not going over network or using SMB. My QNAP does not update any apps that access storage over SMB, same apps installed locally on QNAP do. I switched Plex to a seperate pc recently from my NAS as it’s got more grunt and this is the case for this app won’t update on adding files unless it’s a force rescan or on the daily full rescan.

It seems to be worse on Linux than windows where it works more often. This is not a unique issue with just Roon I am afraid … [moderated]

Is minimserver on the same Nas

Yes it is. I prefer to have everything on the NAS. But Roon is just too resource hungry. It was stuttering on heavy changes etc.

That explains some of why it shows updates instanty then. Its is annoying that it does not update instantly over network and smb, but as I said its not Roon specific but how the nas sends out the updates over the network, drives me nuts on Plex . I used to use my NAS to serve the music to my core and LMS before that and it didnt update via LMS either as that was on a linux based vortexbox pc but never new why until I got Roon and had the same issues. I gave up and added a small external SSD to Roon and never looked back, its quicker access and imediate updates. If my QNAP was better I would switch Plex back but it wasn’t so I am happy to live with this inconvenience as I am not adding new content a lot of the time.

Well, as I am pretty sick of this, I‘ll probably install an internal SSD and put my music there. End of story. Hopefully. You never know with Roon… Really funny piece of software…

I find internal drives can be a bit tweaky, and the copying process is going to be slow over the network. IMHO, you really should consider an external usb drive.

I find internal drives can be a bit tweaky

Is that just a friendly description for saying “that doesn’t work either?”

the copying process is going to be slow over the network

Why would that be? I’ve got Gigabit netwirk, should just zip through.

Of course it is.

Is that just a friendly description for saying “that doesn’t work either?”

No, that is a friendly way of saying that setting up internal storage is trickier than using external storage. So, pay careful attention to the migration steps.

I assume you have read and understand the steps in migrating your music : Moving My Music

And you are making the choice of internal storage after having reviewed: Storage Options

should just zip through.

Should is the operative word. But, might not. After you have set up the internal NUC, you have to use another computer to copy music from the NAS to it.

That is why, I prefer external storage. I can copy straight from my NAS to my computer. Then just move the drive over, and done. While this first mass copy is going, you have to have the RoonServer on the NUC turned off.

How long would it take just to copy all the music from your NAS to your computer?

Is the internal storage on a ROCK not recognised as a network drive ??

Yes, of course it is recognised as a network drive.

What Daniel is saying is that with your current music held on a NAS, then to get it to the internal drive in the NUC is a process that involves using a computer (e.g. Windows File Explorer) to copy files from the NAS via the computer to the NUC. So every file moves across the network twice. First from the NAS to a buffer in the computer, then from the buffer out to the NUC.

It takes half the time.

It takes half the time.

As I plan doing this once-and-for-all thats not such a relevant criteria, but thanks for pointing out.

I‘ll probably install an internal SSD and put my music there. End of story.

Yes, this is probably the best method to resolve this issue, do let us know how it goes with the new SSD. Keep in mind that the drive must be SATA or NVME and we’ve seen some reports that other types of drives like the Samsung mzhpv128hdgm (M.2 slot with PCIe x4 lanes) do not work.

A post was split to a new topic: Roon Does not auto-scan my library on a Synology NAS