In another thread I announced my plans for the Extension Manager:

It is getting close to 4 years that I released the first version of the Extension Manager. Today I want to share my plans with you on how to move forward from here. As the full story got a little long for a forum post I ask you to read the Wiki page I created about “The Road to Version 1.0”. Back in June 2017 I released the first version of the Roon Extension Manager, at that time all that could be installed with it was my Alarm Clock extension. Shortly after, extensions from other developers …


This thread is all about the beta version that is now available. The purpose is to get user feedback and allow extension developers to convert their extensions to Docker images and get them included again.

Version 1.0 requires Docker for Linux. You can run it on a Linux PC, on a Raspberry Pi running e.g. DietPi, in a Linux VM or on a NAS that supports Docker. In general, if you already run version 0.x with the Docker based extensions available you should be good to go.

There are two main methods available for setting up version 1.0, via the setup script or by manually creating a Docker container.

Note: Version 0.x and 1.x cannot run side by side on the same system. If you are running v0.x via the Linux service then it will be disabled by the v1.x setup script. It is possible to switch between the two versions by enabling/disabling services.

The easiest installation method is by using the setup script. 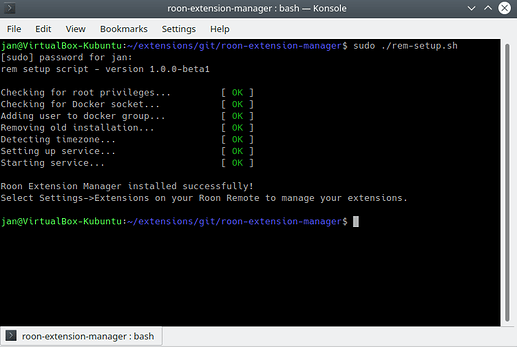 Manually creating the Docker container can be useful if you are already running other containers or if you want to use the interface provided by e.g. a NAS.

In such a setup also the updates of the Extension Manager have to be done manually as the standalone image doesn’t support the update action for the manager itself.

The docker run command can be used to create a container from the image, the full command to be use is:

Replace <docker-gid> with the output of this command:

And <timezone> with the local timezone, according to the TZ column in this list.

It is also possible to use the Docker compose file.

As version 1.0 only has to deal with Docker based extensions it focusses on improving the user experience during extension installation and use. The changes made compared to the current 0.11.9 version are: 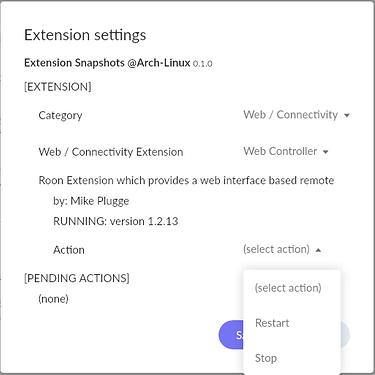 To make the transition quick and easy for extension developers a tool has been created that can adapt the extension code, create and publish the Docker image on Docker Hub and integrate the image in the Extension Manager for testing purposes. The tool is called the Roon Extension Generator and its use is described in the README file.

If you still see this, Jan, I made it almost through Extension 1.0 setup when it hung, “waiting for volume creation”.

You’re dealing with a NOOB. Any help appreciated

Can you provide the full output of the setup script? It is unclear to me at what point in the setup the error occurs.

Are you running the script as root, or as a normal user with sudo?

I will see if I can find the error text. I used your command text which I believe was sudo.

Back soonest. Here it is: I started with your three command sets, the last one being sudo…

I used your command text which I believe was sudo

As it looks like you are logged in as root, is there any difference if you run the last command without sudo? ./rem-setup.sh

BTW on what device and OS are you trying this?

rpi 3b with rasbian

result w/o sudo: zsh: no such file or directory: ./rem-setup.sh

I haven’t tried Raspbian yet, can you provide a link to the image that you use?

The Raspberry Pi is a tiny and affordable computer that you can use to learn programming through fun, practical projects. Join the global Raspberry Pi community.

Ok @John_V, I should have a fix for you.

I installed Raspberry Pi OS and could reproduce the problem. The default username is pi so sudo is indeed required.

Problem was in detecting the home directory of the user when executing with sudo, the setup script is updated to fix his. The steps to take to recover:

The extra uninstall step is to cleanup some files created during the failed install.

Thanks much. Will report back.

Update 1: Install changes worked fine. Through Roon, installed Deep Harmony and enabled, but so far it hasn’t detected my hub. Will it work now, or is there further development work? 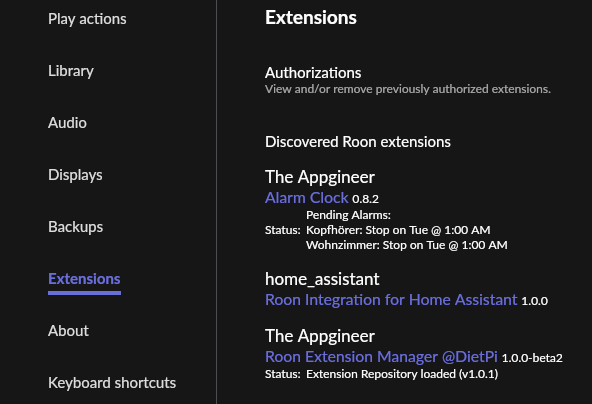 installed Deep Harmony and enabled, but so far it hasn’t detected my hub

That is strange. Although the Extension Manager changed, the Deep Harmony image that gets installed is still the same. Have you updated Deep Harmony via its own update mechanism to the latest version?

All is well now. Restarting solves about 90% of problems.

I updated the first post with a description of Extension Snapshots. It allows you to move over to the 1.0 version of the Extension Manager while still depending on extensions that have not yet moved over to Docker. 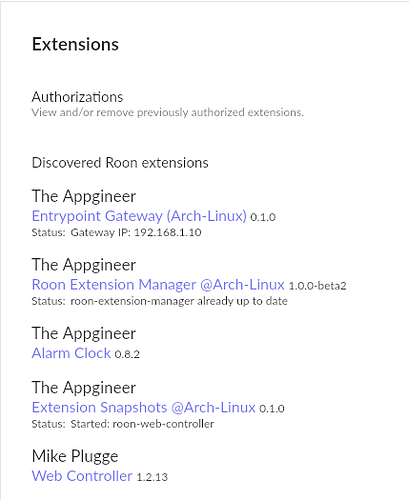 @Jan_Koudijs
I have already installed Extension Snapshots yesterday and also Web Controller. Everything is running fine. Thanks for your great work.

I run extension manager on my nas via a docker. Anway to do the same for the 1.0 beta @Jan_Koudijs

I updated the first post with a description on how to manually create the Docker container. There is now a dedicated image available for this use-case, tagged v1.x-standalone.

I assume that you try to build a Docker image for your extension from the files generated by the Extension Generator. As your extension uses USB it requires some extra packages that have to be added manually to the Dockerfile (be aware that the generated Dockerfile contains the bare minimum and has to be adjusted by the developer).

For the Powermate extension, that also uses USB, I used the following RUN command:


You also have to make an addition to the .reg/etc/repository.json file that contains your Extension Repository entry. This device option allows the user to specify the USB device during installation:

You insert this in the file after the binds array.

If you run into other issues, just let me know.

Thank you, Jan! Yes, i build an extension very similar as roon-powermate (for 3Dconnexion SpaceNavigator) with HID USB communication. It builds fine using “npm install” and runs perfectly. But when i use the build script i get those weird errors. So i don’t think any packages are missing for building the docker image. Thanks for the tip with the RUN scrupt and additional entry, but before i can take care of those things, i first need to find out why the build script fails with those Python errors.