Roon has to make a statement about MQA

OK, I’m sorry… but after the end-of-year Kabuki theater about “something cool is coming” and the fact that we are approaching a YEAR since we were supposed to have MQA first unfold… blah, blah, blah…

Seriously. Roon needs to tell us… US, the paying subscribers… just what is happening with MQA.

No one cares about the past… but what is happening now and when is it coming?

Deep breaths, everything is OK.

Roon will do the first unfold. No timeline, which is OK. Usually this means they are still working on it, which is also OK.

First unfold has been confirmed:

Unlike the TIDAL app, Roon has no difference in audio streaming capabilities between iPad and Mac. You’ll be able to access the same content at the same quality through both without buying extra hardware. And yes, Roon can ship the audio over your wireless network to the iPad. We do not degrade the quality during wireless transmission, or anything like that. That means that today (with Roon doing no MQA decoding yet), both will play the MQA content without unfolding, and in the future, when the…

The CES announcement by MQA is an indication that negotiations have finished and a business arrangement is in place. Implementation will follow.

I know that implementing MQA has a high priority, but it will have to go through the usual iterative testing and won’t be released until it can’t be broken.

I’m confused, I thought Roon was already doing the first unfold? Why is it showing the original sample rate doubling or tripling in the signal path if it’s not unfolding?

Okay, answering my own question since I just found it in another thread: no MQA unfolding at this point, but it sure looks like it. Anyway, looking forward to when that’s actually being done in Roon, that’s going to be exciting! (especially if it can be turned off for some A/B testing

Oh the joy of the press release ! It was bound to send the Roonies into a frenzy. I’m one of them but I will sedate myself heavily and await the release…

What you see now in the signal path of Tidal MQA indicates the fully unfolded sample rate but nothing more. Looking forward to listening myself!

Tag - couldn’t find a subscribe button… sorry for the noise.

Tag - couldn’t find a subscribe button… sorry for the noise.

It’s at the bottom of the thread, by default says “Normal”. 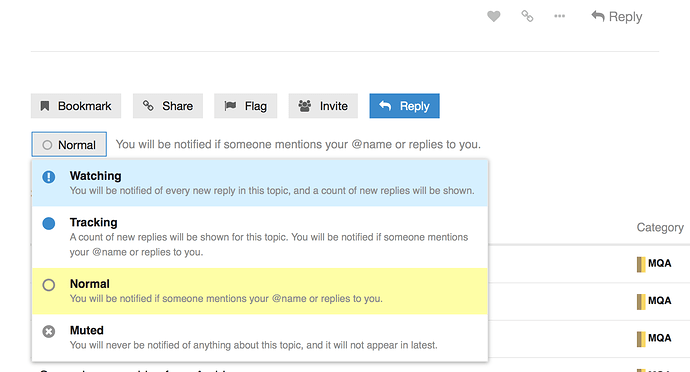 Roon now joins MQA software partners Amarra and Audirvana, who both continue to work on their Windows implementation of MQA. Audirvana Plus for Windows 10 will be released by end of January 2018, enjoying the same feature levels as Audirvana Plus for Mac, and benefiting additionally from a totally redesigned user interface.

Now that contracts have been signed I would hope that the commercial confidentiality associated with negotiations might ease into mutually agreed statements regarding implementation. That will be informed in part by technical considerations so there are a few things to be done before announcements can be made.

All that is publicly known at this stage is that after a (very) lengthy period of negotiation, agreement has been reached. Roon will support first unfolding of MQA and anyone who knows further details about it has a big dopey grin on their face.

All three labels and the independent community have signed a contract with MQA. That contract has terms that require a full catalog conversion to MQA.

If you can’t wait anymore, purchase a Sonore Rendu.
It will most likely anyway give you a lift

I tried three mqa dacs and honestly love the two unfolds in roon more then full. The same was true of the tidal desktop app. By the way roon tidal is better than desktop app in sound on same CUST server pc.
What I do want and don’t see is markings on master albums.
I can search for them on desktop app and it’s easy to see with an M below album. Will tidal have this ?

The most important thing is to know what colour the MQA signal path light will be.

Everything else is just noise.

I tried three mqa dacs and honestly love the two unfolds in roon more then full.

Odd because Roon doesn’t unfold. At the time of this post.

Actually they don’t and quite a lot of the “paying subscribers” don’t care about MQA at all, so chill.

The files are being played st 24/96 this is two of the three in think.
On the tidal desk top this is what occurs so please explain if I am wrong.
Going back to marking the all mqa albums any update ?

Sorry, I can’t explain what you see in your system. I just know for a fact at this particular time Roon does not unfold MQA.