Roon is displaying 2 or 3 copies of each album

I have all my music files stored on a NAS, when I first set the Roon, it got all the files, trouble is that now I have 2 or 3 copies of each album! I would like to only have one of each and started to eliminate duplicates but, since I have a little over 2000 albums, it would take me forever to do it this way…

Is there a way to eliminate all duplicates in one swift operation? Or, clean out Roon and rescan the NAS?
Also, would any of these affect the original files on the NAS?

I would greatly appreciate it if you can help me out with this
Thanks!

Are you saying you actually have more than one version of albums and don’t want to see the duplicates?
Don’t “delete” them in Roon, that will actually delete them. Roon will warn you before it does this though.
You can “mark” duplicates and under the edit function tell Roon to “group” alternate versions. Then you will only see one.

is the same version of an album appearing 2 or 3 times!
If I delete any of the duplicates, does it delete from Roon only? or from the NAS as well?

Deleting files in Roon deletes them in your storage library as well. You are warned of this during the process with ample time to abort.

DELETING a file from Roon will delete the file completely from your NAS. IN order to discuss the best next steps, finding out why there are duplicates is the first step.

On your NAS, how many copies of the album do you really have? For example, if you have a MUSIC directory and then a copy of that directory for a backup (as an example), when Roon scans your system it will see 2 copies in different locations on your NAS. In this case, you would want to exclude those backup directories from Roon’s scan process so those copies do not show up.

I have all my music on the NAS (QNAP) and have it organized on files by genres, except that I also created separate files for music files I’ve downloaded from HDTracks (file is named HDTracks)
When I first set up Roon, I selected under library “use genres extracted from file tags” but, after reading more, I found somewhere that I should also “use genres from Roon metadata” and it seems that’s when the duplicates started to appear.
Another thing, when I set up the NAS, I created a music file where I put all the music but, I noticed that another file music was created out of the NAS and appeared under PC music. Now when I look under “settings - storage” it shows two different files, one is \NAS129A63\Music; the other \192.168.1.3\Music
Sorry about the long reply but wanted to give you all the info I thought might help understand the mess I’ve created!

now I have several files (albums) that, when I try to play them, I get a message saying “transport: failed to load media” ???

Just looked for one of them on the NAS and… it ain’t there either!!!

If it’s not on the NAS, it definitely won’t show up in Roon!

I didn’t know that deleting an album in Roon would also delete it in the NAS!

Yes, it’s true. You get two separate warnings to this effect any time you attempt to delete tracks from within Roon.

Read above - you were warned about 3 times

I have already read everything, problem is, I deleted before I was aware of this. in the past, I have used multiple other programs that are NON-DESTRUCTIVE, so, no matter what you do, you never destroy the original!

Thanks @ogs,
I’m fairly new to Roon, still trying to figure things out.

When first started, I got 2 and even 3 copies of each album. I just completed a reset of databases and reboot of the ROCK and, still got 2 copies of some of the albums and, some albums on the NAS do not show on the Roon.

Also, I have my albums on the NAS organized on different folders, however, these do not show up on the Roon.

Can you help with any of these? Thanks again!

Sorry @Denis_Fiallos, I’ve never encountered this so I do not know how to resolve such a problem.

Hi @Denis_Fiallos,
Roon does not have a folder browser (there is a feature request for this here). That means music files that you organised in folders won’t have that level of organization in Roon.

If you have duplicate albums in Roon, I am assuming that they there are also 2 copies on your NAS.
Take a look at the file info within Roon of each album and check their storage location. Just click the 3 dots-menu and select “View File Info”. 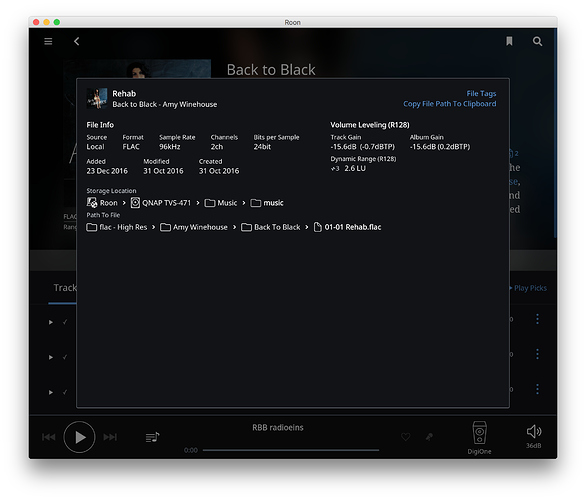 You can also have the file location displayed in the “Track” section. Click the arrow and enable “Path” there. 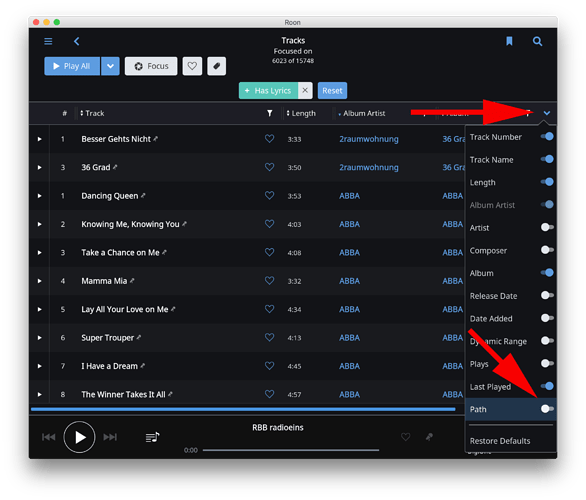 I checked and there is only one copy of each album on the NAS, however, looks like my QNAP NAS has created a “recycle” folder on its own and in it, there are some copies of some of my albums… is there any way to get rid of these? I’m afraid that if I delete the folder I may delete the original as well?

It’s hard to diagnose from here, but it sounds like you have your Storage settings to look at the same folder twice, and thus it is scanning and reading it twice.

As an aside, I think Roon would just be safer if they didn’t allow any delete function for files. You can just use Explorer or the Apple equivalent. Roon could offer “delete from library” which would just remove the entry from the Roon DB and remember not to re-add it.

Anyway, you should try to exclude the @recycle folder in your storage settings. To do that open settings and go to the storage settings. Click on the 3-dot icon on the right side next to your folder(s) and click Edit: 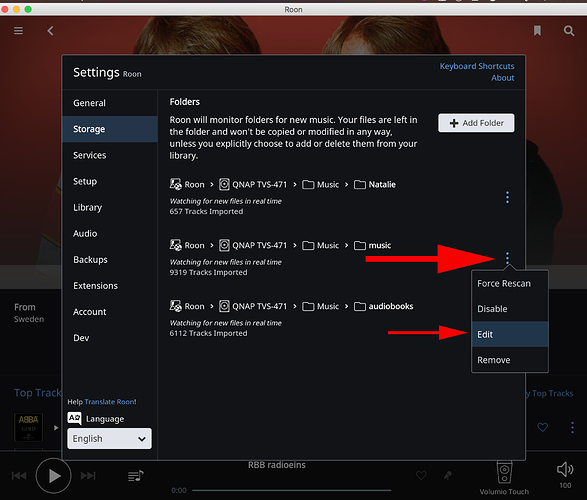 In the next window click in the last text field (with the label “Ignored Path”. Add /@recycle/ to your entries there.
(Make sure that there is a semicolon (;) after the last previous entries.)
Then click Save

It should look ljke this: 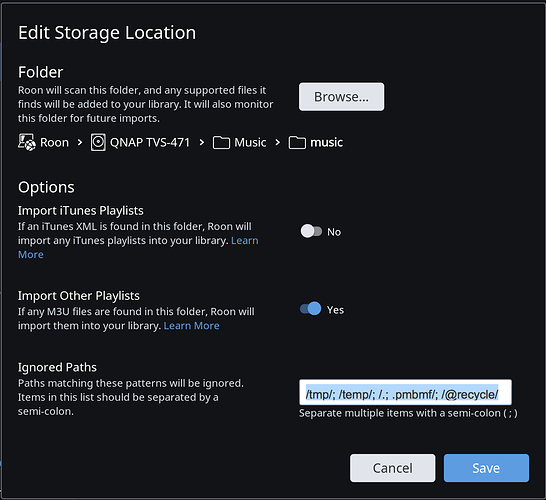 It did at first, then was fixed, then it came back as a regression bug … but should be fine now.
(I reported to Roon and verified all was well, post fix).