I started using Roon about a month ago and all was fine until this week. All of a sudden Roon keeps removing and re-loading my music from the library. All my albums will suddently disappear, and then Roon will automatically start importing them again. When the albums are imported back into the library, my edits are still there. Once all the albums are all imported again, they will be ok briefly, and then they will disappear and Roon will start importing again. This has been cycling over and over like this for the past two days.

Roon is watching three different directories on the NAS, and it seems like this is only happening in one: the largest one with about 700 albums

What is your network setup like…is the laptop on wifi or lan cable connection?

You should probably detail all your network details with respect to lan, router, switches and NAS connection.

Comcast cable modem connects to a Apple Airport Extreme (latest version) which is the router and wireless access point. Synology is plugged into the Airport.
The MacBook Pro is on the wireless network and has a stable 300 Mbps connection.
I disabled AFP on the Synology and the MacBook Pro is using SMB.

See below settings for the Folders. The middle one (Music Library) is the one where the files are disappearing and reimporting. 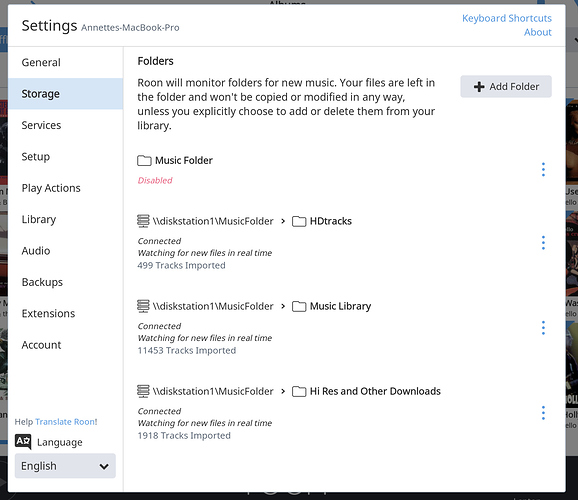 Some further info on this issue -

It seems that the problem only occurs while I am copying files to the NAS. For the past few days, I have been ripping CDs directly to the Music Library folder on the NAS. During this time is when Roon goes into its endless cycle of importing and deleted and reimporting.

I finished a ripping session this morning and Roon was re-importing again. I checked when I left the house at 10am and Roon had finished and was idle. When I came home at 3pm, I checked the Roon logs and it had essentially been idle all day. I starting ripping CDs again and within 15 minutes, all the files were deleted from Roon and it had started re-importing again.

Hi - This has been reported before. It is not advisable to rip CDs directly to the watched folder, but to rip to another folder and then copy over when the rip is complete.

Apparently, MacOS can also exhibit this issue (albums disappearing) when working with really large libraries, but I don’t think that is your problem right now.

Thanks for the reply. Yes, that seems to be the issue… I stopped ripping directly to the NAS, and there have been no issues.

I ripped about 50 CDs to a local drive yesterday and then copied to the NAS last night and no issues. I stopped the Roon core before copying and then restarted it after it was finished just to be careful.