It seems when TIDAL has a edited and an explicit version of an album or single, Roon only shows the edited version for playback. See attached to compare tracks available in the TIDAL app and what’s available through Roon. If you favourite in the TIDAL app you will get the explicit version when playback in Roon, but if not you will only be able to see/hear the edited version (Drake - Back to Back for example). @palbratelund, @danny, @brian FYI 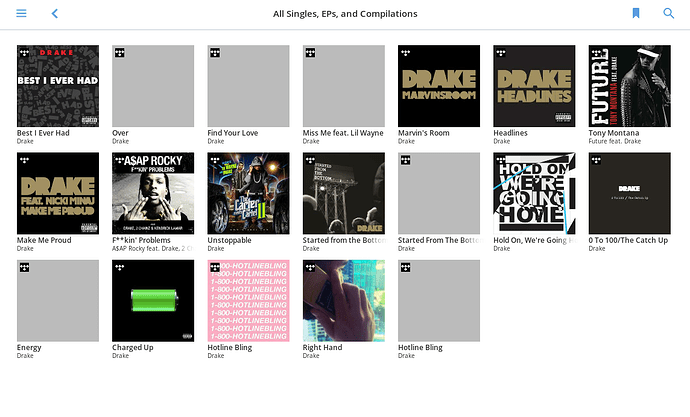 This has always been a tricky case for us. @jeremiah, I think this is for you.

Thanks @brian. I seriously think this needs to be addressed and fixed as soon as possible. I never knew about this issue until last week and if you go through TIDAL you will see that there are a ton of albums that are available in both edited & explicit versions (especially in the Hip-Hop and Metal genres) and the fact that Roon only choses the edited version is a major problem that needs to be corrected IMO… If it can’t be fixed, I will most likely be cancelling my Tidal subscription, as I have no interest in using Tidal without Roon. @palbratelund.

I quite agree with @anon94274355, I would not have bought into the Roon/Tidal combo (which means wouldn’t have subscribed to Tidal, and not bought a lifetime membership for Roon) if I had known you in effect support sensorship.

@brian and @jeremiah - I think perhaps our new explicit flag can help you divide these releases and have both. We introduced sometime October I think and everywhere you see an E in our clients at track level gives a good indicator. Plus it quite often says [explicit] at album title level. Agree this needs to be fixed.

To confuse a metadata issue with censorship is pretty hefty.

@palbratelund: I said in effect, which I still think is correct if only non-explicit versions are available through Roon.
From @brian’s comment it seems the issue has been known to Roon for some time.

From @brian’s comment it seems the issue has been known to Roon for some time.

Please don’t put words in my mouth. And please stop rudely implying that anyone here is in support of censorship. That is both un-true and out of line.

My comment was meant to acknowledge that the general problem of identifying edited/clean versions of albums algorithmically can be difficult, that’s all. This particular issue is new to us as of @anon94274355’s report today.

There is no deliberate preference for edited versions in Roon’s metadata system. These albums are being improperly flagged as duplicates in our database and one is being chosen over the other based on factors unrelated to the explicit/edited nature of the content.

@anon94274355 found a handful of albums where we’re filtering the explicit versions as duplicates and labeled it as a general trend. Our analysis of the full data set doesn’t support that conclusion (and to be fair, @anon94274355 doesn’t have a mechanism to do the analyses that we can).

We will investigate this.

@palbratelund, I wonder if it would be advantageous for TIDAL to use an “Edited” tag as well. Personally, I have no interested in seeing edited content in Tidal, but I’m sure some do, especially parents of young children. As I’m sure you know not all albums with questionable lyrical content are marked “Explicit” but I think it’d be great to know what albums have also been edited… just a thought.

@brian, I hope you didn’t think I thought Roon was doing this on purpose, I figured they were just being treated as duplicate albums and not different versions.

@brian, I hope you didn’t think I thought Roon was doing this on purpose, I figured they were just being treated as duplicate albums and not different versions.

Yeah, I was/am clear. Your report is totally reasonable.

What is “edited” in this context? All recordings are edited

@palbratelund, It means the content had been edited by the record label to remove “bad” words.

That’s why on TIDAL you have 2 versions of the same albums/tracks… “edited” and “explicit” versions.

In the past record labels have created two CD versions… 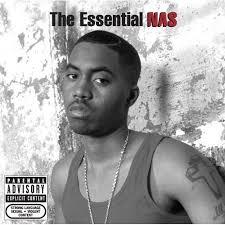 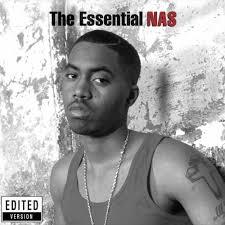 Bloody nora. Is this different from a clean version?

Then, they show up like this in the TIDAL clients (one E for explicit and the other one as clean): 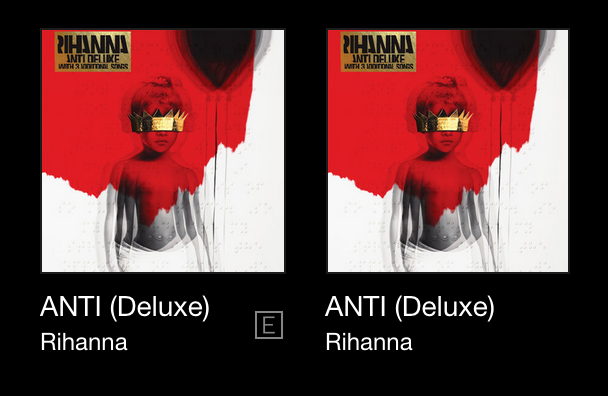 Right and what I’m suggesting is a way to hide the clean version in a preference setting, as me and a lot of people I’m sure have no interest in listening to a censored version of an album.

If you see that from at metadata perspective - 99,9% of the world’s recorded heritage is then considered “censored” as they all are marked as clean. Personally I prefer to see there are different versions of a work. Cluttered, perhaps. Showing reality. Yes.

Sorry, that statement makes absolutely no sense… There is a difference between an artist choosing not to swear in their lyrics and having a record label make a version of their record with the swearing lyrics removed or bleeped out or whatever (edited).

I’m curious does TIDAL count the new Rihanna as 2 different albums when counting how big your overall library is?

OK. So there are three categories then. Clean, Edited and Explicit. Or perhaps I misread your answer. I don’t even know if there’s a flag for edited only. I’ll have to go and check.

So i just signed up for roon and have the same problem. This is driving me nuts. I listen to a lot of jazz and blues which is fine, but a huge part of my listening is hiphop and R&B. definitely would help a lot to separate the edited versions version explicit versions (edited versions are basically unlistenable personally).