Roon maxing out my network when playing Tidal MQA

Can you use wired ethernet from your PC instead of WiFi?

So what is your config? Is that machine your core and are you doing everything via wireless?

Please post more information about your setup including network.

Reporting An Issue To Roon Support Still having a problem? Something seems wrong? Roon’s community site is where you can find the answers you need. The Roon team keeps a close eye on the Support section, and with help from members of the community all kinds of questions get answered quickly. If you need to report an issue, just tag @support in the body of your post (not the subject), making sure to: Describe Your Setup Tell us about your setup when reporting an issue. If you’re already runnin…

I’m running wifi from the computer and then ethernet from the router to Devialet. I’m quite new to Roon so I don’t know the terms but this is the only computer in my setup and then using RAAT to stream.

Computer is a PC with Intel i7, 16 GB ram, SSD etc so it has good performence. Router is a Asus AC68u that is like 3 meters from the PC. Never had any issues with the network before. Internet speed is 250 mpbs.

As mentioned in our Networking Guide, we always recommend using an Ethernet connection whenever possible Knowing how things behave when the Core (even if you have a different machine you can connect this way temporarily) is connected via Ethernet would definitely be a great start to understanding what you’re seeing here. Often times connecting via Ethernet will resolve these types of issues.

In the past we’ve also seen Google DNS help with TIDAL performance. This may help improve things here as well.

Also any other devices that are also using this WiFi setup will have an impact on throughput too. 5G is great for short distance high bit rates but gets rather ineffective at longer distances. Not all router WiFi implementations are ideal either so performance can suffer if the number of channels or radios is limited too.

Getting great WiFi can be a bit of a black art. Especially so for streaming applications where timing and throughput are paramount.

Thanks for all the replies!

I know that WiFi isn’t the best solutions, but that is what I have to work with for now :(. My question is more if it’s normal that is should take over 250 mpbs to stream a MQA file? The thing is that I have no problem streaming for example 4K video over WiFi and send it to the TV from my PC and I would actually say that my WiFi is very good! All my units connected to the WiFi are within a few meters with no walls between them and the router.

I have no problems streaming MQA directly through Tidal with my current setup (haven’t yet looked how much network data it’s using).

How much data is Roon using for you when streaming MQA?

Are you doing any DSP upsampling? That would increase the bandwidth needed to the endpoint for sure. Im not sure what’s normal but I’ll try to run some tests.

No upsampling or anything else added to the stream.

If your music is on a streaming service then you have the following:
Off the Internet, 1 hop on WiFi to your core.
One hop back across the WiFI to your router.
One hop over Ethernet to the Devaliet.
I am interested in your CPU performance which seems to roughly mirror your WiFi plot. It looks as if you may be running out of CPU performance. I would enable multicore working and see if that helps. I’d also look at why using the wireless confers such a heavy load on the CPU. Maybe update your wireless drivers if possible. Or if you have a spare slot use an added WiFi card that doesn’t load up your processor.

How do I enable multicore? Don’t have Roon in front of me right now, but is it easy to find?

I would say that my computer is quite fast, Intel i7 6700HQ which has 8 threads, 16 GB ram, SSD and a separate GPU. So it shouldn’t bottleneck playing a MQA music file from Tidal?

Just an aside, but the Roon UI has a lot in common with video games, and uses the OpenGL library, which in turn will use your GPU. See this post, and in particular:

The user interface is driven by a piece of technology that could be best described as a game engine. It supports fluid animations, and we are trying to keep the frame rate at 60 frames per second (fps), just like a game. It renders graphics using OpenGL and hardware acceleration, just like a game, too.

MQA does use up some processing power so the complaint that issues are seen when playing MQA are more common than you might think. From memory you go to setup, advanced setup and put sigma-delta parallelisation to on. That should push Roon into load sharing across the CPU cores. See if that makes a difference.

Took a screenshot of how it looks when I’m steaming through Tidal with Devialet AIR instead: 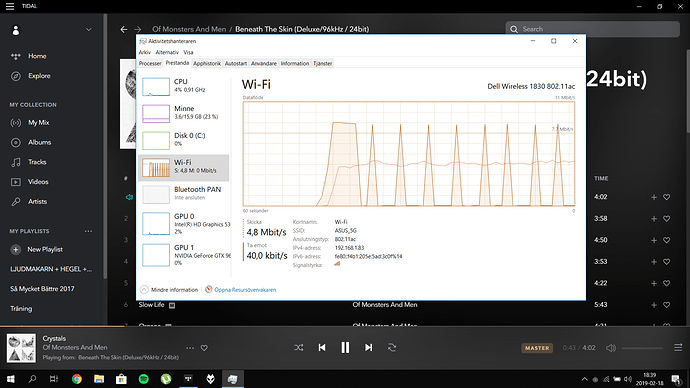 Neither can I! Has it been removed?

This issue sure sounds a lot like the issues we’re experiencing with Roon RAAT to Devialet… Did something change with RAAT in 1.6?

Just posting to let everyone know that what I am seeing is nothing like what you are reporting.

At the moment I have 37 devices on my network. 27 of them are directly connected via WiFi and 3 of them are wired to the Orbi Satellite and then use it’s WiFi back to my Orbi Router. 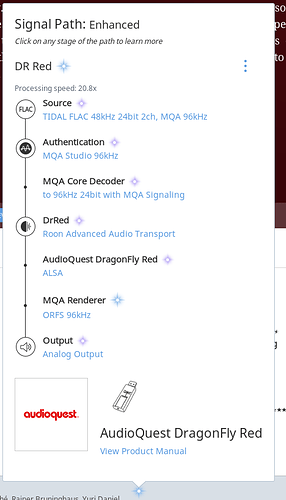 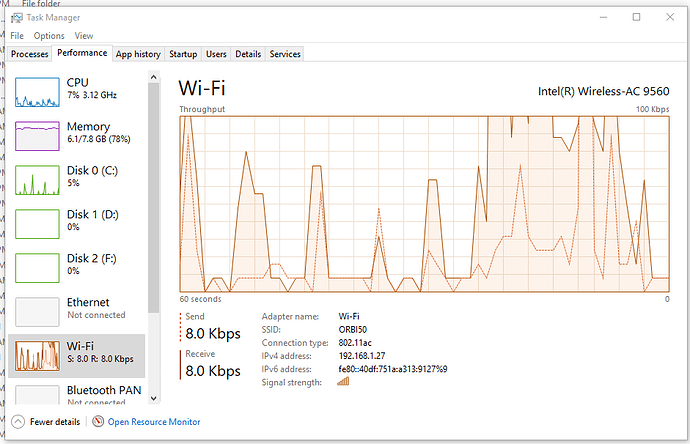 At a peak of 100 Kbps my usage is a fraction of yours. Wish I knew why.

How do things look if you play to a different endpoint besides the Devialet? What about playing to system output of the Core?

This is how that looks: 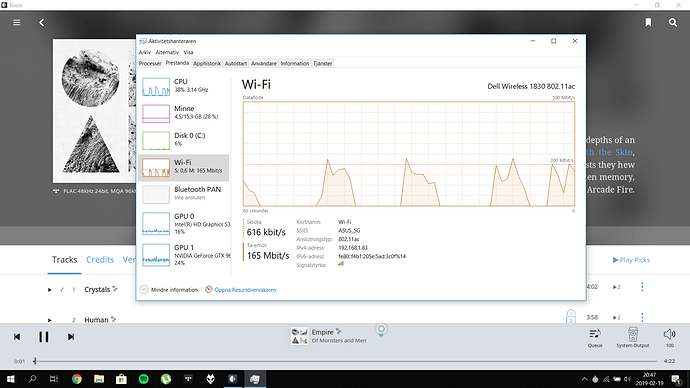 Didn’t get the message that it was loading slowly and skipped the track, but still very high network usage. In the screenshot you can see me changing the songs, that is why it goes up and down.

I spoke with the team about this, and this behavior that you’re seeing when using the Devialet endpoint appears to be the same issue we are currently investigating. Please fill out this form for our technical team’s investigation — Thanks!