Issue:
Since the last Roon update, Roon freezes when the BlueSound Node 2 is on the network. Once I unplug the Node 2, Roon works fine. The other BlueSound devices (Node 2i and Pulse Flex 2i) all work fine.

A shot in the dark here but I wonder if this is an IP address conflict. Rebooting the router would resolve it if that is the case.

Thanks for the suggestion.

I made sure that the router’s firmware was updated and rebooted - I still have the problem.

Are you able to see the Node 2 from the BluOS controller app? Does it appear on your router’s device table?

Is the light on the Node 2 blue? Wondering whether its a Bluesound issue not Roon.

Yes, the BluOS controller recognizes the Node and controls it just fine. The blue light is lit.

I’ve got 8 BluOS devices and hoped my past experience might provide some insight into the issue affecting you.

I hope Roon support is able to assist you.

Unfortunately, I have yet to hear back from support.

I'm having a problem with Roon -- how do I report it? Support

How To Get In Touch With Roon Support If you’re having a problem with Roon and something isn’t working as expected, you’ll want to make a post in the #support category. To help our team resolve your issue, please make sure to describe the issue, and describe your setup. Describe The Issue When you start a thread in the #support category, make sure to include: What’s not working How often the issue occurs This could be “every time I start the app”, or “every time I click a certain button”,…

This post is tagged for support. Is there something else I should be doing?

Wish I knew, I hope support responds in a timely fashion.

One other suggestion. From the BluOS controller select Help then Diagnostics to display a list of devices and their IP addresses. Are all your devices displayed when you do this? 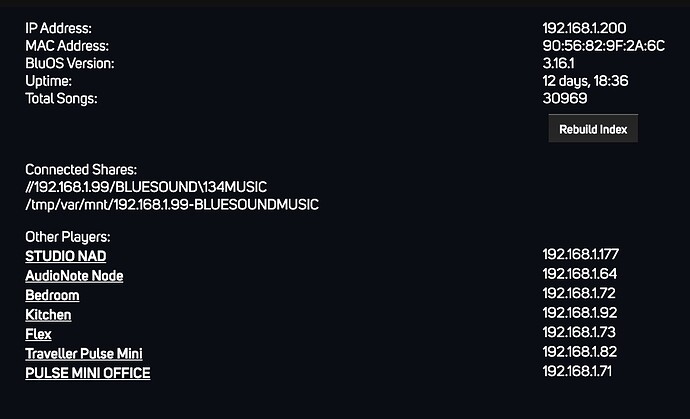 I found a way to restore the Node 2 connection, and I think I have identified a driver for the issue I was having.

First, the underlying driver is related to playing certain DSD files (DSF-64) on any of my BluSound devices. I discovered this last night when I attempted to play a DSD file on a group comprised of my Nucleus and a BluSound Flex 2i - the Roon app froze and I needed to remove the Flex from the network for the Roon app to work. As of now, there are some DSF files that play on BluSound devices and some that do not.

Now, I had to figure out how get the Roon app to recognize these BluSound devices again. When I connected one of the devices to the network, the Roon icon in the Roon app kept spinning and spinning without ever connecting to any device (including the Nucleus). However, I notices that after 45 seconds or so, the Roon icon would stop spinning and the Roon app would be connected to all of the devices for about 2 seconds…and then the icon would start spinning again. I decided to try playing a non-DSD file through these devices during the brief 2 seconds the Roon app appeared to be working to see if I could clear the queue of the DSD files. After about 6 cycles of this, I finally got a non-DSD file to play and the devices remain connected!

So, my system to back to normal again. I don’t know if this is a general issue with playing DSD content on BluSound devices or if I have some corrupted files, but I will try to avoid playing DSD on Blusound devices in the future.

(I never did hear from support, though)