Roon Nucleus not playing over HDMI

I have a Roon Nucleus that I purchased about a year ago as my main primary device for the Roon network. This is wired directly to my Marantz AV8801 using an HDMI cable. I have two Raspberry Pi Hifiberry DACs hooked up to the same network as the Roon Core. I also have some Blue Sound devices. I am having issues with the Roon nucleus not playing any audio through the Marantz. I manually selected the Roon input on my Marantz receive but I am not receiving any sort of audio. The Marantz seems to have the most issues. The firmware has been updated. I have tried various audio settings on the Marantz Receiver through the Roon settings. Is there some issue with playback with the Roon Core and the HDMI output. 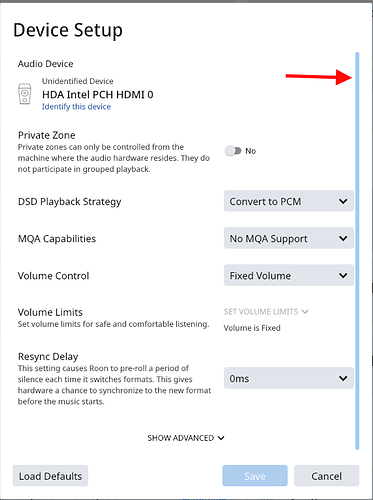 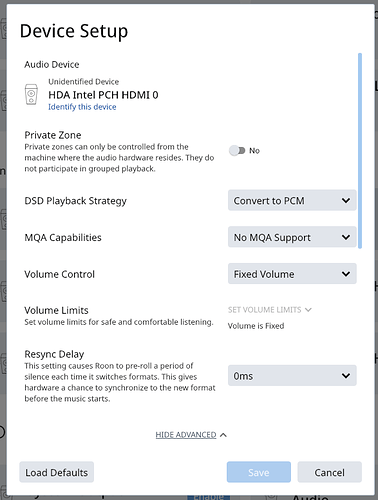 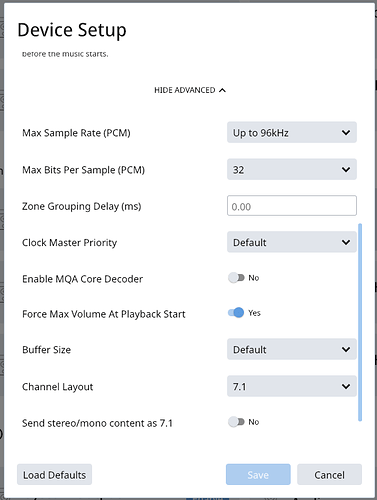 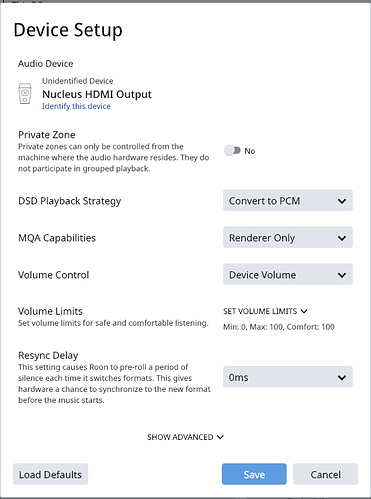 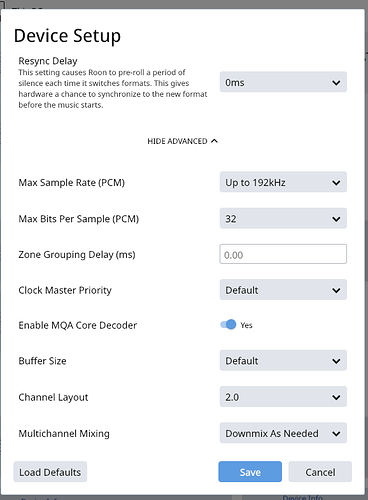 Here are the screenshots. Thanks for your help.

You have “Renderer Only” for the MQA setting. Does the Marantz have MQA capability - I don’t think it does?

Set this to “No MQA Support” and see what happens.

You could also try dropping down the Max Sample Rate for PCM to 96kHz. I think that was necessary on my Denon, even though it is supposed to be able to deal with 192kHz…

Tim, I’m just wondering if the changes Geoff suggested to help with your HDMI output from Nucleus into your AVR worked for you?? I’m having a similar issue (my sound comes and goes for about 10secs each time). My AVR sees the signal from the Nucleus, then it doesn’t, and I get a “No Signal” message on front panel. Mine is an Anthem MRX 520. I’ve read that Anthems are not yet “Roon Ready” but I believe that only applies if trying to use the device as an endpoint. In my situation, it’s simply being used to playback an HDMI audio signal.

Thanks for your help, and Geoff, if you’ve any insights, I’d appreciate them as well.

John had a similar problem on the Denon receiver. It was decided by the selection of the HDMI cable. He played excellently on HDMI, upsampling was used at the output in 32/192.

So I tried changing the sampling down to 96Hz, switching the audio zone to 7.1 and clicking on sending mono/stereo audio as 7.1, and also turning MQA on and off but I am still not getting any sort of playback from the HDMI output on the Roon Nucleus. I even tried plugging it in to a different HDMI port on the Marantz to no avail. I have updated all of the software on my ipad, roon nucleus, and roon players in the house. At this point it’s been about a few months where it doesn’t seem to work.

Any insight would be appreciated?

Take different HDMI cables and find one that works. The correct cable displays the service image of the RooN on the TV screen. There is no other way to decide.

After more than two years of tussling with tech support regarding my Nucleus, I am ready to punt. I have spent much too much of my own time and that of my very competent consultant trying to solve the issue. Tech support has been willing to listen but their suggestions haven’t resolved the issue. It seems pretty clear that I have a hardware issue but Roon has not been willing to either fix my unit or send me a new one.

The problem is the Nucleus’s HDMI port. It doesn’t work. It used to work, but it doesn’t anymore. Back when the HDMI port worked, I had an HDMI cable from the Roon Nucleus HDMI port to the Marantz AV8801 HDMI input. That receiver processes the digital signal and outputs balanced outputs to my Marantz amplifer, which drives my B&W in-ceiling speakers in the living room.

In addition to the HDMI port, my Roon Nucleus has two Dragonfly DACs plugged in via USB. The RCA outputs from the DACs go to my NAD CI940 that powers two zones of two speakers each in other parts of the house. On the network, I have three Bluesound devices, one over Ethernet, two over wifi, along with two HiFiBerry DACs (Raspberry Pis) on the network. All the devices work fine and do not have any sort of connectivity issues.

I love the Roon software and want to continue using it. I don’t know why Roon is not willing to stand behind its product but other than the HDMI port, the Nucleus is working fine. So, the issue is, how to I get music to come through my best system, the one driven by the Marantz AV8801? The alternatives I am considering are as follows:

Whichever way I go, the goal is to have music in my living room. So, learned community members, what are your thoughts?

Personally, I would go with a Raspberry Pi 4 with whatever HAT you need to give you the output you need for your Marantz. If it has USB, you don’t even need a HAT. RoPieee or RoPieeeXL works well.

Allo DigiOne Player, and feed Coax into the Marantz

this, stick with a HiFiBerry’s DigiHAT if you’re happy with their boards / cases elsewhere on your network.

You can do this in a similar fashion to what you already have, i.e. using HDMI. A Windows micro PC with Roon Bridge on it should do the job and assuming set up is OK should just slot in and work. This presumes the problem is the Nucleus and not something else in the chain.

Yes, that would work great as well. And those micro PCs are in the low 100 USD. Cheaper than an Allo by 100 dollars.

It does look like you reached out to us about this issue while your Nucleus was under warranty, so we can send the unit to our service center to determine if it is still eligible for warranty repair. I will follow up via private message to gather purchase and shipping details from you, thanks!