Is there any reason to not upgrade the RAM in the Nucleus. I’m surprised it only came with 4GB. Looking to upgrade to 1 8GB stick. Thanks.

There is no reason not to. But if your library is small, there isn’t much need either. If you do want to do it then personally I’d add another identical 4gb stick.

Anyway, it is wise/necessary to check the compatibility of the RAM for the Nucleus. Not all RAM can be used for an upgrade. In case you decide to add another 4GB module in order to save some costs, it is wise/necessary to add an exact identical module. I am not an expert in this area, but in the past dual (or even triple) channel RAM with two (or even three) channels via the use of two/three modules had some advantages in speed. See the next blog from 2015: https://nucblog.net/2015/09/dual-channel-vs-single-channel-does-it-matter/

Good point. I’ll leave as is. Was just generalizing that not much seems to work well on 4gb anymore, but this works fine. Thanks.

My Roon Core running on CentOS 7 starts at about 1GB RAM used (total, not just Roon) after fresh boot and then ends up averaging steady state of around 1.5GB RAM used after running for a few weeks straight. Roon really doesn’t need much RAM, unless you have several hundred thousand tracks in your library…

That’s helpful. Thanks. My library will most likely not ever exceed 5000 albums. Its much smaller than that right now.

I’m just checking this now @Bradford_Paul. I may be mistaken.

You are allowed to change the RAM, but if it damaged by the new RAM or the upgrade process, that’s not covered under warranty.

Would you suggest a second identical 4gb stick or replace the existing with an 8?
In general, does the RAM upgrade process, if installed properly, go fine?
Thanks!

You know adding an identical stick should work, and the act of adding a second stick should be the least intrusive. If you have any reservations about doing it safely, take it to a computer technician.

Thank you. I have installed my own RAM for years so I should be ok.

I did this on my old mac mini (the ones where you could easily switch out the RAM) and it def made a big diff in performance (though not as much as when I put in an SSD). I would be interested in hearing what RAM you get for your Nucleus and how the installation goes…! (as I might want to try it on mine!)
thanks,
D

Sorry to reply to my own post but want some RAM help! I opened my Nucleus Plus and it has the 1 x 8Gb Ram module from Transcend. Model # TS1GH64V4H. This module is discontinued and despite scouring the internet, I cant find another! What else could I put in? The extra bay is easily reached as u can see by the pic…should only take a few min to add the extra 8GB RAM. The specific specs are; 8Gb DDR4 2400 SO-DIMM 2Rx8 1.2v
I see some similar modules from Transcend but speed is 2600 not 2400 and I see some 2400 speed modules from Crucial and Kingston but they are 1Rx8 not 2Rx8…I just dont want to mess something up!
Thanks
Doug 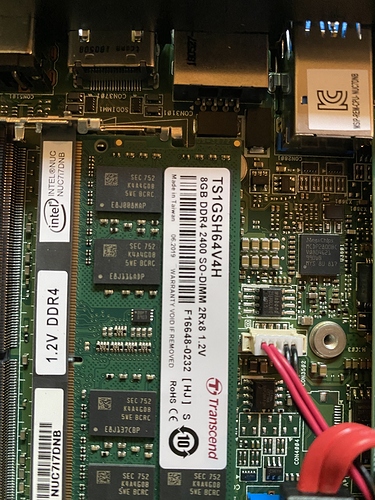 In any environment that I have completely changed out RAM, I have not had any issues. If you want to upgrade and cannot find the exact match, I would suggest getting 2 8GB sticks or 1 16gb stick. 8GB though, should be plenty For this application, even with a very large library. I would be surprised if you saw any difference between 8 and 16. I would not be saying that if you were referring to the average PC out there. I have the standard Nucleus with 4GB of memory which runs fine, but I just generalize the notion that not much runs great anymore with 4GB. That being said, my Nucleus runs perfectly fine.

I second Paul. Unless you have an unusually large library, I don’t think going over 8 gb is going to make much of a difference. And, I would upgrade a single stick of memory by buying new memory new in pairs, to get the same production run, but that is me.

Roon could not void your warranty for upgrading RAM unless they could prove that the RAM used or the person doing the upgrade damaged the Nucleus.

This was all fleshed out years ago. First, when car companies tried to void warranties when people used functionally equivalent aftermarket parts. Then when computer companies tried to do the same thing. Some even went as far as to put a seal on the box and say that the warranty was void if the seal were broken. All of that did not did not survive legal scrutiny in the courts…

Ok! Thanks all for the replies! My library is pretty big, 15K albums and 250K tracks…not sure if that makes it a ‘necessity’ or not, but would be interested to try it out!
Thanks
Doug