Since 1 year I have been using the docker image “steefdebruijn/docker-roonserver” on a VM in Freenas. This works excellent !!!

Due to a migration from Truenas core (freebsd) to Truenas scale (Linux) I need to change my setup and I have 2 choices:

Option 1, Works but Tidal is not playing, although it is connected. Instead of messing around myself I prefer to use option 2.
Option 2
Request to add a template is denied. Because the container would not be up to date.
See: https://github.com/truecharts/apps/issues/1573

As far as I am concerned this does not do justice to all the good work of Steef !!!

@Steef_de_Bruijn
Would you take a look. Expect your response to be enough to get the team to make the template.

ps. fixed the Tidal Issue by setting the DNS Preference to
“Ignore DNS settings from the Kubernetes cluster”

I’ll not speak for Steef, but it’s clear from the response that Truenas don’t see this as their problem. There is a pretty big gap between their goals and the Roon Docker offering.

TrueCharts is a catalog of highly optimised TrueNAS SCALE Apps. Made for the community, By the community!
Our primary goals are: Micro-Service Centered, Native Kubernetes, Stability, Consistency

They’re after full Helm charts to run in a K8s environment. If Steef isn’t a K8s/Helm user this is a big ask with a pretty steep learning curve. Getting a suitable helm chart through Truenas QA isn’t likely to happen quickly.

Instead of messing around myself I prefer to use option 2.

Given the Tidal thing is a local issue of some kind I think your best option is to get messing. Good luck.

I also upgraded to truenas scale and ditched my proxmox hypervisor.
Before, Roon was running on an proxmox LXC container and it was perfect.
It’s a shame that the Truecharts team doesn’t want to add Roon to their catalog.
As a result, all that remains is to create a VM to host ROON.

How did you proceed?

I’m not sure that’s the case, there’s just a large gap between the Dockerfile and the Helm charts that. Truecharts want. They’ll expect enthusiastic contributors to submit charts for packages rather than doing it themselves is all.

Hello,
would it be possible to make me/us a guide/tutorial for creating a ROON docker in truenas scale please?
I do not know at all the docker and the subtility during their creation

Yes, i will make screenshots of my roon setup in truenas this weekend for you

Thank you. I also will look forward to this! The forms in the Scale Docker Image Launcher are very confusing to me. 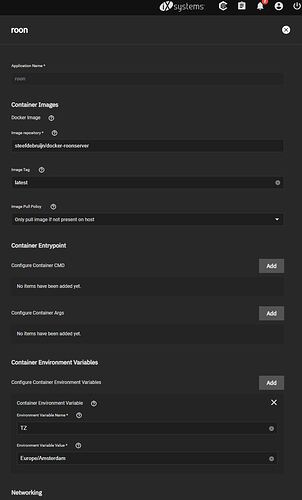 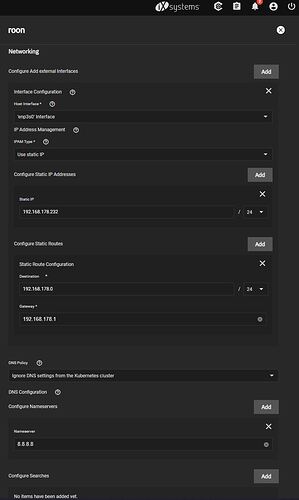 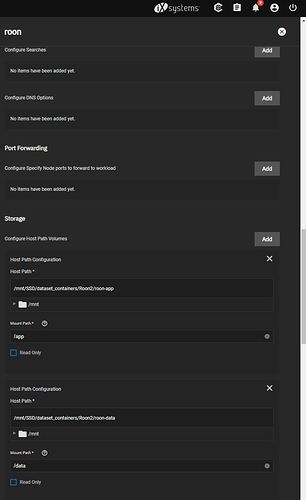 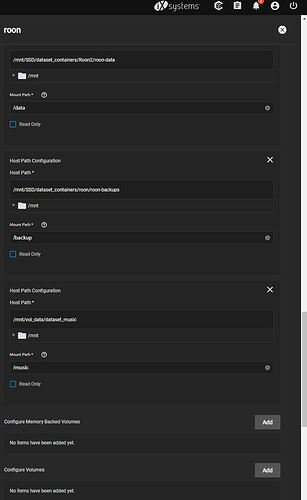 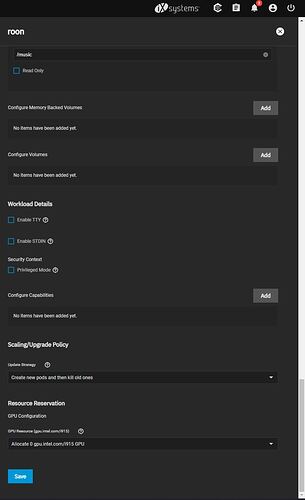 Thank you for your weekend time and effort!

Thank you so much for sharing. I’m going to test this tomorrow.

You’re welcome !!
Love to hear if it worked out.
Would be great because with Freenas your Roon setup is in safe hands.