When using Roon on my Mac Mini it doesn’t seem to quite fit into the full space of Screen Sharing. I access my Mac Mini via Screen Sharing from my Laptop Air, but for some reason Roon seems to be larger than the actual screen sharing screen, and hence I can’t properly see the bottom of the screen (where the music playing controls are).

Hope the above makes sense, and will try and do a screen shot, but not sure how to do or attach.

Thanks for any advice in advance.

Try turning scaling on. It’s under the View menu on the top menu bar.

Appreciate the info, but it doesn’t seem to change anything if I have scaling on, it just seems to stay the same.

Does your screen share only fill 3/4 of the laptop screen, is this something I’m doing wrong? 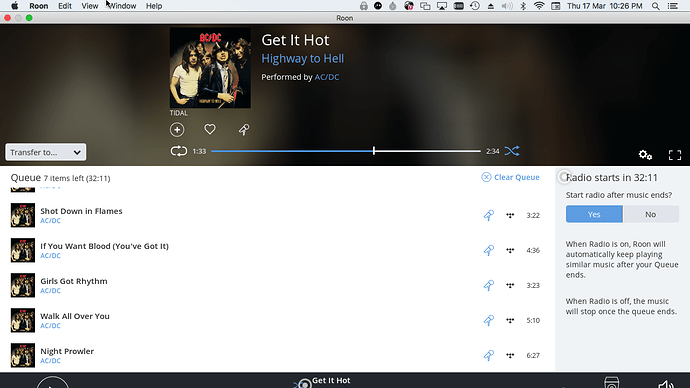 Could you go to System Preferences, then Display and tell me what the size of your Mac Mini desktop is. Mine is 1280x1204.

Are you running Roon as a server on your Mini and as a client on your laptop? That’s the way to go. Screen sharing isn’t an issue then.

The fonts are a wee bit small for my eyes on the laptop, but at least I can see the full Roon screen.

Thanks for your help, really appreciated.

I didn’t realise you could load Roon software on the laptop unless it was the main computer. Have Roon on my Mac Mini (Core, Server, whatever it’s called running my Library), and now just loaded Roon onto my laptop (Client, and now can control Roon without the need to use Screen Sharing).

So as long as I have Roon running on my Mac Mini I can control via the Roon software on my Laptop. This may seem basic to others, but what a great way to control (just need an iPhone app and it would be perfect - for me).

These forums are worth there weight in Gold.

You can also switch to RoonServer instead of the full program on the Mini. It will run faster without he graphical interface. There are instructions in the forum to convert a Roon install into a RoonServer install. It is pretty painless.

You can also control the core RoonServer from an iPad, and soon, hopefully with version 1.2, have basic control with an iPhone app.

These are the instructions for moving to RoonServer mentioned by @fritzg. You might also find the new Roon website of interest as it contains a description of Core, Control and Output.

I just moved from Roon to headless RoonServer on my Mac Mini. Wow, this took me three full minutes