I made a Roon Playlist, picking/choosing songs myself. The list consist of 239 tracks (23 hours)
I have started to play this list 5-10 times last 2 weeks, always hitting SHUFFLE Play. It cam apparent that i heard a couple off sings moer frequently. So i looked into the play-count of the playlist. (see attached photo, the slider is still in the top, so lots of zero plays)). It seem that the lowest count is 5, where i would expect that a lot of songs would have a 1 (one) count as I want the playlist to be played random/shuffle).

So my Question is;
How do i really randomly play songs in a playlist? 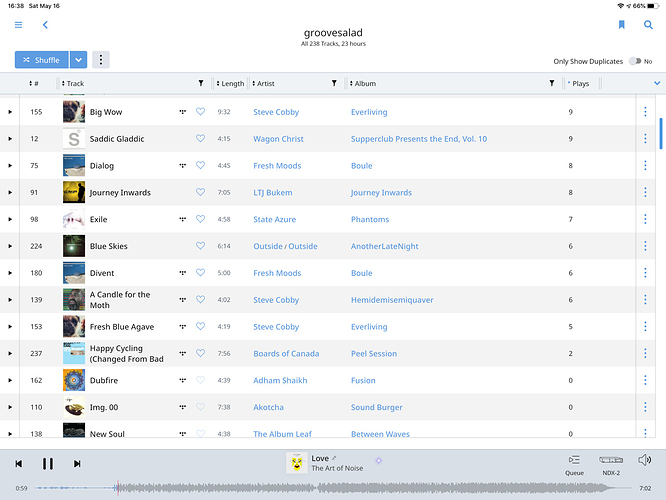 Each time you start the playlist do you let it play all the way through? Have you played any of these tracks outside of the playlist?

Thanks for reaching out
I do not let the whole playlist play through.
I start always hitting the shuffle button.
I have played some of the tracks outside the playlist (these have much higher counts then the ones shown in the photo).
NB1: I notice that the Heart next to the zero (0) count track is lighter then the played ones.
NB2: i checked if particular artist where played. From a artist some some still do have 0 play for track A and 16 for track B. Same seem to hold when looking at tracks from one album (albeit that most tracks are single tracks from an album.
NB3: Most tracks are Tidal tracks (some personal ones)
NB4: if i woud hit a 0 count track, it will play.
NB5: playing with it around again today, i do not see an 0->1 count when i play a track…

There are a couple of tricky things about play counts in playlists that you need to know.

See this test I did just to illustrate to you:

Track 1 and 4 are my local library tracks.
Track 2 and 5 are the Tidal tracks added while the track was NOT in my library
Track 3 and 6 are the same Tidal tracks as 2 and 5, but have been added to my library.

I understand your explanation, clear, thanks. Unfort that tracks not in library are not counted.
So my “evidence” for my claim is shaky at best

Is there an explanation available for the “not so random” shuffle? Is it possible that "Shuffle play: discard/unfavor the non library tracks?

What i will do is: I will pick at random, pick 6 songs with a zero count (document them) and play my list for couple of times. I would then expect that (some of ) these songs will then have a 1-2 play count.

s there an explanation available for the “not so random” shuffle? Is it possible that "Shuffle play: discard/unfavor the non library tracks?

I am not sure, Frits. I so rarely use Shuffle play myself that I have not run into your scenario. I’ll give it a go when I get home from work.

I noticed when playing songs from a playlist that as you stated above, no library tracks are not “counted”, but when going to the album of that song, it is counted in the album list!?
Hope its clear what I mean.