Roon Playlists, where are they

Running latest build of 1.8 on Mac.

Playing through Roon app on iPad and Mac desktop.

Go to Home in the main menu then scroll down

This is totally weird to me

They are under the home menu. Perhaps post a screenshot or two.

the bottom of my Roon screen.
No playlists anywhere. as I have said, not on Mac, not on iPad or iPhone app either

all running latest up to date versions.

to be honest, I don’t recall ever seeing Playlists and I’ve been subscriber for almost 2 years. 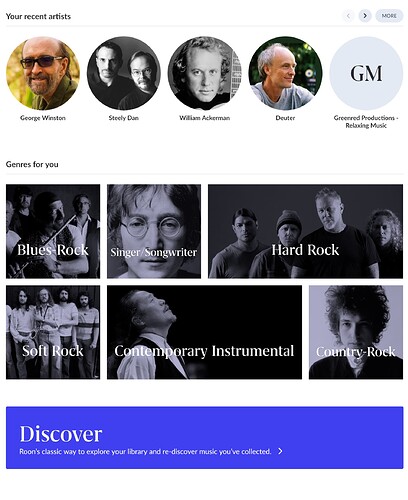 Do you have either Qobuz or Tidal?

You need a streaming service to see the roon playlists and daily mixes.

interesting…does it actually say that anywhere???

ok… interesting. everywhere they are referred to as Playlists, curated Playlists, Roon Playlists, but here it’s called “Daily Mix” not really the same thing, if you ask me. but, oh well. thanks for the help. appreciate your patience. still learning

Several Roon features depend upon streaming services. They are impossible otherwise.

There are two sorts
Daily mixes which are as they are named mixes for the user that change daily and are machine algorithm generated.

Playlists by Roon are human curated playlists that are the same for all users. And again as you see below is streaming based.

“In our latest release, you can now access everything our music team has curated, directly from your Home screen on both streaming platforms.”