Description Of Issue
Within the last couple of days, any playlist I create will only play one song and then quit. I have to manually hit the play button again to resume playing the queue.

I have not changed any settings or done anything different than I have for the last 2 years so I am stymied.

Does this behavior only occur when playing to the Vault 2i zone or does it occur when playing to other audio endpoint as well? If you try starting playback to the NUC’s HDMI port, do you notice the playlist stop progression? Even if you don’t have anything connected to the HDMI port, looking at the seek bar to see if it stops for HDMI as well would give us a good data point.

Hi Noris,
This has been occurring when playing to a grouped Airplay endpoint (the Vault 2i and 2 Sonos One speakers). This has worked flawlessly for a couple of years until recently.
I will try playing to the Vault as an endpoint and see what happens. I also have a Chord Mojo I can connect to the NUC and play directly from the NUC; this will allow me to bypass the Vault entirely. I will report back. Thanks.

So, this appears to be an Airplay issue. When I play directly to the Vault or through the Mojo, the queue plays through flawlessly. As soon as I switch to the Airplay endpoint the problem resumes: it plays one song and stalls. What baffles me is that this just started. After almost two years of trouble-free playback, suddenly this.

Which of your zones in particular are having Airplay issues? Is it just one of them or multiple airplay zones?

I have one group with the Vault, and two separate Sonos. We always play them as a group as we have no real need to separate the playback. We can just turn it off in any room if needed (see attached image. Red is turned off)
The problem does not occur when playing an album, or streaming radio, but only when I have created a playlist for the evening with songs from multiple sources. 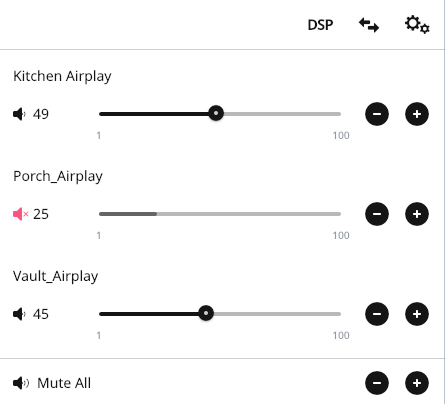 Thanks for clarifying. What you are doing in the screenshot provided is muting the zone, not necessarily turning it off.

We should clarify if this behavior is due to just one of these zones in particular. Can I ask that you ungroup these zones and try playing content to them one at a time?

If this behavior occurs with just one of the zones via Airplay, we would be in a much better position to address it.

Okay. It does not cut out when Airplayed to each source individually, or with any two sources grouped. Before I regrouped everything to try again I was notified of a Roon Core update which I downloaded and installed. Not sure why, but for now, the problem appears to be gone. I will keep you posted. Thanks.

Thanks for the update! If the behavior re-occurs do let us know. I would also try to play to the zones un-grouped in case it’s just one problematic zone that’s causing this intermittent behavior.