I am having a problem with Roon Radio where it will not play AAC streams. I primarily use the BBC channels, 1,2,3,4,5 etc and have not had this issue previously.

I installed Roon Server following these instructions. I loaded ffmpeg at the time, but I wondered if I had missed it. I tried to reload and said I had the latest version.

If I choose an mp3 stream it will play no problem. If I try a AAC stream I get the following issues - Playback was interupted because a track failed to load

Any suggestions on how to fix?

To be clear, if you play a BBC radio station’s MP3 feed, it works, but not the AAC? Have you tried all AAC streams, or just the 320kbps one?

Furthermore, did you add them manually or add them from the Live Radio page? Finally, are you in the UK or elsewhere?

P.S. Reboot your server, too.

Thank you for responding.

So, I am in the UK. I have rebooted the server.

I just tried a number of other stations and most don’t have higher kbps although I could play P4 Dalarna from Sweden at AAC 128 kbps.

None of these were added manually.

I don’t believe this is a codec issue. Normally, those bit rates are only available for offshore users. Are you using a VPN on the Core machine?

No, no VPN on the server. I am sure they use to play, but maybe I was mistaken.

As you’re in the UK, they should play. Why they don’t is a mystery, but not to do with codecs, since you can play MP3 and AAC.

Do you stream anything from TIDAL or Qobuz? If not, what Internet connection do you have?

80Mbps is more than adequate. Does Qobuz steam through Roon as expected, i.e., are the only issues with Internet Radio?

No issues with Qobuz streaming, I can stream 192khz no problem, so it is a little odd.

Same problem for me, in UK, no AAC radio station working (including 96k on BBC)? QNAP nas for Roon core.

No problem here, as mentioned earlier. Are you and @tahsu on Virgin or an Openreach broadband provider, e.g., BT, Sky, Plusnet etc? 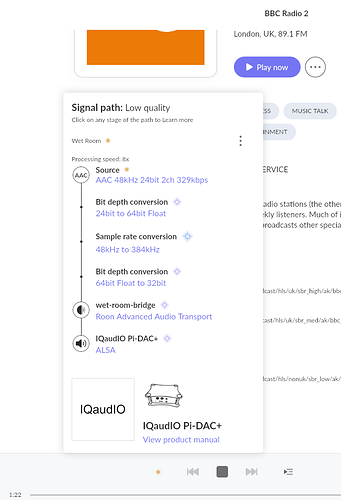 Oh well, that theory doesn’t hold… I’m on Sky too! How about your DNS servers?

Same problem for me

So just to be sure, you can play MP3 stations like the OP can?

Yes listening to radio right now on MP3 - seems the stations that have both, I can hear the MP3 fine, but the AAC’s don’t work at any bit rate for me

The OP can also play AAC, but not the highest bit-rate.