Roon Radio not working with Qobuz

I am having an issue with Roon Radio. It only plays music from my library, including music from Qobuz added using the “Add to Library” button. However, it does not play other music from Qobuz. I currently have a free trial of Roon and Qobuz (both of which are excellent, I will be a new subscriber when the time comes). This issue has existed since the start of the free trial a couple of weeks ago. As suggested on other support threads, I have tried fixing (without success) by unsubscribing and resubscribing to Qobuz and rebooting the Roon server device. My router firmware is up to date. The option to limit Roon Radio to library is deselected.

Are you receiving any error messages when you try to use Roon Radio?

Thanks for replying. I usually do not receive any error messages, although once I got a message along the lines of nothing similar found so restricting to library? I just tried roon radio function again, from some albums I own, some qobuz added to library and some qobuz not added to library, but got no errors. However, in every case, roon radio was limited to my library.

First, can you please reproduce the issue once more and note the time at which the error occurs. Please also make a note of what album/artist you are starting Radio from. Then respond here with that time, and I’ll make sure we review the diagnostics related to that timestamp.

Ok, no problem. At 20:40 BST (British Summer Time, which is GMT +1) I tried Roon Radio from the album City to City (Remastered) by Gerry Rafferty. This is a Qobuz album which I previously included in my library using the Add to Library. I looked at the next few tracks in the queue, which were all from albums in my library. No error message received.

I met with the team today to discuss this issue which is affecting a small number of customers. We’ve passed a detailed report along to our senior development team and they’re doing some additional investigation. As soon as this investigation is complete I’ll be sure to reach out with their findings.

just to let you know that I encounter the same problem. I’m using a Macbook Pro with MACOS Catalina.

Many thanks for your help

Hi, it’s broken again for me, this is the second time but it’s been fine for a while. Just noticed that roon radio says it’s limiting itself to the local library only. Let me know if there is data you need as it’s very easy to reproduce. 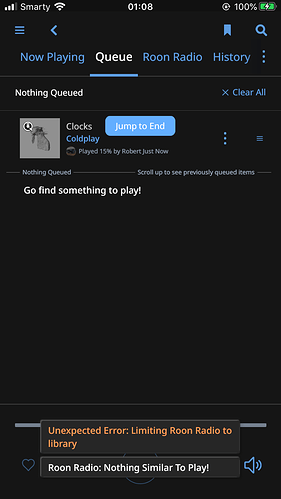 Roon Radio is being limited to my library Support

I installed Roon just over a week ago. I’m also trialling Tidal. I experienced the same issue when I first connected Tidal to Roon. It fixed itself the next day. This morning Roon Radio was working on my phone as an audio output. Then about an hour later I used a different phone to control my 851N network streamer. The issue returned and Roon Radio was limited to my library. I suspected that Tidal does not allow more than one active playback connection, so I went back to my first phone. On th…


I have tried this morning on my main roon endpoint and it seems to be working again. I’ve transferred playback to two other zones including the one that was failing last night and no issues so far.
dylan (Dylan Caudill) April 13, 2020, 4:52pm #11

I just wanted to let you know that our team believes they have tracked down this issue and we have a ticket open with our developers. I can’t provide any specific timeframes just yet but we hope to have something available soon and we’ll be sure to keep you updated!

We’ve made an update to our servers that we believe will help improve this. Can you give this another try and let us know if things are working for you now?

Your patience as we’ve looked into this has been greatly appreciated — Thanks!

Unfortunately I have the same issues as before. My first attempt resulted in an error message “roon radio nothing similar to play”, all subsequent attempts did not result in any messages but - as before - selections were limited to my library. For diagnostics, I attempted this at 8:58am BST. I also tried restarting Roon, rebooting my core device and restarting my endpoint (ipad pro), nothing helped.

My free trial ends in 6 days, when do you hope to have a fix for this problem?

Many thanks
Mike Jeffrey

The changes that we made seems to have resolved this issue for most, but you have our apologies for the ongoing issues on your end.

Just to confirm, does this happen every time? Would you kindly try the following:

Does the error occur? If so, please give the timestamp and we’ll take a closer look!

I tried those steps. Unfortunately it still doesn’t work, I get an error message saying “nothing similar found: limiting to roon library“. I tried at 18:50 BST today 12 May.

All the best
Mike

I just wanted to let you know that the diagnostics report was received and is with the team for investigation. I checked in today and they let me know they’re still looking into this, but I’ll be sure to update you ASAP when they have provided feedback.

I discussed this issue with the team this morning. The errors that they’re seeing in the diagnostics report are different from what we’ve seen in the past and we have not been able to reproduce this issue either, so we are hoping we can get a bit more information on this.

Thank you very much for your continuing support. To answer your queries:

All the best
Mike

Moving forward, I’d like to get a bit more information for the team’s investigation. Previously we took a look at the diagnostics report when you tried to start Radio playback from the Beatles. Next, I’d like to try launching Roon Radio from a specific album instead so we can take a look at the report for this. Can you start Radio from a Beatles album and let me know which album you start it from as well as the time it fails and then I’ll have the team continue to look into this.

At 17:20 BST I started roon radio twice from the album page For “Please Please Me” (The Beatles, released 22 March 1963). I don’t have any Beatles in my library so this was from Qobuz, in fact its the first Qobuz album that comes up when I navigate to the Beatles artist page. On both attempts, Roon radio played a track from that album (which I think is an improvement as previously it would not play anything not in my library) but then on my second attempt I looked to see what the next four queued songs were, all were from Bridge Over Troubled Water (Simon and Garfunkel) which is a Qobuz album in my library. So after that first song, roon radio still seems only to pick up songs in my library (whether my own albums or added to library from Qobuz). Hope that helps.