After the most recent upgrade (27/10) my Roon core lost all audio devices and then reported a database issue.

I followed the instructions and this is where it gets weird.

I have scheduled backups enabled to Dropbox. Roon does not routinely display the red triangle, so I assume all is good. 1 backup each day at 5AM, max 10 backups.

However the last backup date is showing as May 23 of this year! And not within the last few days.

Oh well, I restored - now all of my recently added albums show up, including those added in the last week.

But the played tab has not updated, it is showing old played albums and the listening history is blank.

There are files within the backup directory dated after May 23, and Dropbox displays daily activity - files being created and deleted.

I’ve rolled the Roon directory in Dropbox back by a few days, same thing. Library restores, play history does not.

@support is there anyway to analyze/repair my old roonserver directory, to recover it? Or conversely can I share my backup directory on Dropbox for analysis? 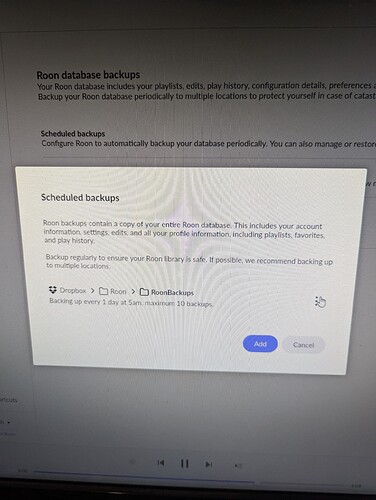 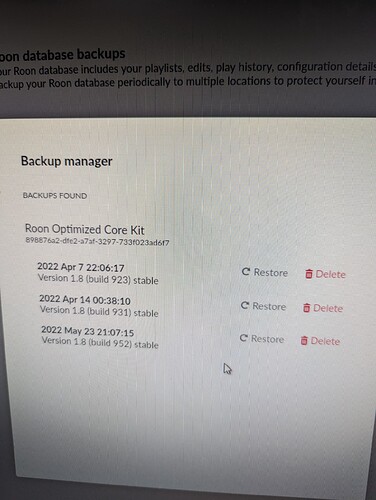 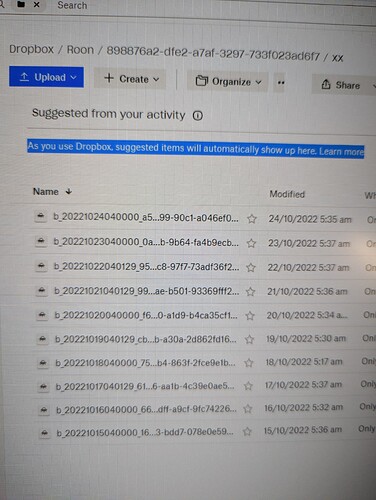 On my pc and phone - history is missing 6 months, but all added albums are showing with accurate dates.

Sorry to be the bearer of bad news, but play history is stored in your database. So, as you restored from a backup that was created in May, all your subsequent play history has been lost … unless you can find a more recent backup.

I can’t understand why albums added only a few days ago are showing up - the backup must have been recent?

If your library is local Roon will have rescanned your storage locations immediately after you restored your database, so recent additions will show up in your library.

All of my played albums appear in Room ARC, but not on my pc or phone.

This bit, I don’t understand. ARC pulls its data from the core, so I would have thought that it would mirror the state of your core. That said, maybe ARC is caching data from before the restore … I don’t know.

Hopefully somebody else (or support) will be able to offer some more encouraging words, but I suspect that your recent restore has wiped your recent play history

This is Dropbox playing silly games.

Just rewinding my roon backup directory to a few days ago and try another restore.

Just rewinding my roon backup directory to a few days ago and try another restore.

If you’ve found a more recent backup than the one you mentioned earlier, hopefully you’ll be able to get back to close to where you should be, but I’m also puzzled as to why your previous restore recovers Tidal and Qobuz albums but not your play counts.

Hopefully someone from support can figure this out.

I have scheduled backups turned on in Dropbox. Roon reports my last backup as 23 May.

Yet! There are files within the sub directories dated later than that.

Furthermore, in Dropbox there is activity every single day as expected, I can roll the directory back to yesterday or the day before. I see files created and deleted.

For some reason Roon is reading it as an old backup and not restoring any history past that point.

Incredibly frustrating! Any clues would be hugely appreciated.

I’ve tried editing the date on roon_backup and the various versions of that file.

Nope. Roon still reads the directory as 6 months ago.

This is from a random directory in my backup folder on dropbox. Roon reports the last backup as May 23, yet there are clearly files more recent that!

A long shot, but I just wanted to check that you’re aware that the Backup manager window - the one where you pick which backup to restore - is scrollable, even though this isn’t immediately apparent. Is it possible that there are later backups further down that you haven’t scrolled down to?

I really thought that was the answer for a minute!

Bit alas, mine is non scrollable. May 23 last backup - despite more recent files in the directory?

This is all unbelievably frustrating!!

Backup settings have been like this for months. Roon has not displayed the red triangle - so it thinks it’s backing up somewhere/somehow?

Yet evidentially it’s done precisely 0 backups since May 23!

Except the May 23 backup restores albums into my library from only a few days ago, yet no history!?

I’m afraid I’m out of ideas so hopefully @support will be able to come up with something that will help.

I hope so, it’s all a bit weird and frustrating.

You’re the only responder so far? Hopefully they’ll see this and be able to suggest something.

There’s so much activity on my Dropbox account - day after day in that folder, so something is being written? Just the time stamp appears locked to May 23.

Anyway, thanks a lot for your help so far.

Is anyone able to help with this issue? My secondary problem is that I want to use Roon, but as my operational state drifts further from whatever can be recovered in my backups - this is going to get harder to solve.

If anyone needs any more information, just let me know!

I feel like I’m shouting into a void a bit, appreciate everyone is busy - can I just get an acknowledgement that someone will look into this for me.

I appreciate it’s frustrating and ask for patience, Roon’s support team monitor this section of the forum and will follow up you when it reaches the top of their queue.

I should add, to help with expectation, that the Roon support team don’t work at the weekends, so their response probably won’t be till next week.

Thanks for the update! Really appreciate it.

I wasn’t even certain I was posting in the right place. I don’t expect an immediate answer - it’s probably a tricky issue.

But the re-assurance that it’s “message received, we’ll get back to you” is perfect. Thanks.

I figured it out, in case anyone else stumbles across this problem.

1 - downloaded /Roon directory from Dropbox. Not sure this is essential, just makes the process a lot quicker

4 - Backup Manager in Roon recognised all of my recent backups, restored latest, All good.