Hi everyone! New roon user here. I have read the Roon system requirements doc and have a couple of questions.

One of the things I have noticed is that roon is regularly using over 4GB of RAM. As I’m sizing my server hardware, here are a few questions I had.

Output devices are a lot of sonos gear using airplay, a roon ready A&K SE180, and a couple of laptops running roon bridge with access to DAC/AMP combos. “Settings → Audio” shows about 25 eligible endpoints that I would consider to be separate zones.

It looks like roon server can benefit from a faster CPU but won’t benefit from more than 8GB of RAM or more than 128GB of internal (OS) disk. Is that right?

For ROCK even 128GB is probably too much, but you won’t find a smaller M.2.

As far as RAM goes, it depends on the size of your library. For you and for most people 8GB is enough. However RAM is cheap. If you want to be positively, absolutely prepared for any major increase in your library, then go for 16GB.

I’m considering an Intel i9 CPU, which is ~30% more expensive than the i7. Is that going to be overkill

A qualified yes, it’s overkill. It’s based on how many endpoints you want to simultaneously run, how heavy is any DSP processing that you will do and how big is your library.

Does ROCK support docker or something similar?

No, but there are how-tos on the net that talks about running ROCK in a VM. Here’s one -

Thank you! Quick question on the CPU. I have around ~25 endpoints, but likely will only ever have ~4-8 running simultaneously. With that info, do you still think i9 is overkill? I don’t have a preference one way or another just wanting to make sure I don’t overpay or undersize

I have around ~25 endpoints, but likely will only ever have ~4-8 running simultaneously

Hmm, 8 simultaneous endpoints is an edge case. The i7 Nucleus+ ambiguously states it’s good for over 6 endpoints.

BTW, Ethernet is the preferred connection.

I’ve updated my core to an i9, because I’m using heavily DSD (also multichannel) processing.
If you are not in the DSD area (PCM processing doesn’t needs so much power) and don’t want to use HQPlayer, then you don’t an i9.

But another point: Rock is great (very stable and light), but you are restricted in the hardware and also you can’t install anything on such a system and you don’t have any control on it…

Super helpful to hear from people who have needed to go outside of/beyond the standard system requirements. What is your disk and RAM configuration? (if you don’t mind sharing)

Got it. Given the lack of docker support with ROCK I may end up with a similar configuration since I’d like to colocate my other music applications on the same hardware (e.g. lidarr, beets, etc). What mechanism do you use to share the music disks with other apps? (I’m assuming those 2x8TB SSDs are used by more than just roon core)

You know, that beginning with Roon 2.0, it works only with an internet connection.
So I’ve some backup systems like LMS and three DLNA-Servers.
But primarily I’m using (there are over 10 TB local music files) Roon for streaming.

Does ROCK support docker or something similar?

No, but there are how-tos on the net that talks about running ROCK in a VM

Evidently one can run Roon in a container, at least under Synology.

Hi, folks. Synology recently released a DSM upgrade which introduced compatibility problems with the Roon package a number of community members, including me, run. I’m using this opportunity to switch to running Roon in a Docker container. I put together this walkthrough to hopefully help anyone else considering going down the same path. This walkthrough utilizes the container image produced by @Steef_de_Bruijn, who I want to thank for his work. That work made this possible, and it’s sincerely…

Welcome to the happy life of Roon …

Just as an example I recently (6 months now) moved my core from my Desktop (i7/7700 16Gb) to a NUC. It’s TINY and hides behind a monitor waiting to be moved next to my streamer (but never got around to it)

Roon endpoint needs and Roon Core needs differ. Neither is a particularly challenging application for today’s hardware. I recommend using Linux if the machine is solely a Roon Core server. Linux can be pared back to be pretty lean unlike MacOS and Windows. Roon does this with its ROCK Roon Core distribution.

Roon Core will cache metadata and some of that cache will be memory resident. More memory is more buffer cache for the file system and for memory resident metadata. A fast local disk for the media library helps when the library is “big”. Media can be on a NAS.

Nobody ever mentions them but the multi-media instruction set matters. Current AMD and Intel processors have much more robust multimedia and vector floating point instructions than found in older processors.

I’m not sure Roon Labs specs the multimedia instruction set. That’s somewhat dependent on the FFMPEG implementation used and the ALAC and FLAC implementations used. They generally come with the OS. In the Linux universe, they adapt to the hardware found. In Apple land, same. The codecs use the best instruction set found on the machine.

Your Internet service performance is likely the limiting factor when a search extends outside the local library. Choose a good service and connect Roon Core to Ethernet rather than WiFi.

Agreed. Indeed, a library that size will run very well on an eighth generation i3 NUC with 8 GB. But all those endpoints… note that single thread performance is almost always more important than the number of cores.

No idea how much RAM ROCK doesn’t report it (I think). I must admit 32 gb was OTT, the Nucleus has 8Tb for example. Again ROCK doesn’t report the CPU load , but other than when importing LARGE amounts of files eg at the start of Roon, the NUC has never blipped and gives no indications of struggling.

Also bare in mind that a NUC/ROCK is basically an appliance , set it up, leave it on and forget it. Many users have their NUC hidden there is no need to access it other than to switch it off.

I use SMB on a windows 10 OS for sharing this is the Import Config screen (until recently) for my JRiver server , you can see its a direct network address. The F drive is Music, G is video , H is more music but duplicates etc not included in Roon. The ROCK portion shown now doesn’t exits but it did until a few days ago. I added it to show what it would look like. 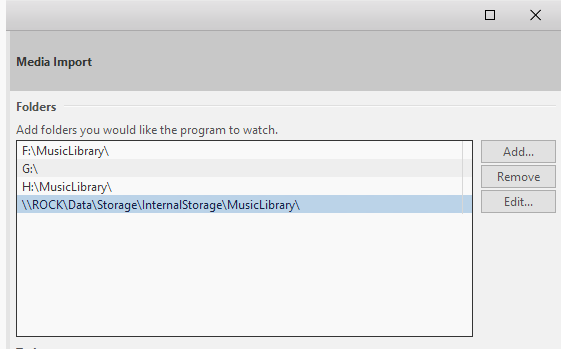 I treat the NUC storage as the “master” all new material goes into it first and Sync (SyncBack Pro) to a HDD (F drive in this picture) in the desktop to keep a full copy. I also BU to 2 external USB HDD just in case. I sync (NUC <-> F) both ways because I use the JRiver app to edit metadata so its a 2 way thing

I have just rearranged my drives so that the JRiver import is completely independent of the NUC (the picture above was “created”. This is just in case the Roon 2.0 “Internet on requirement” has any impact on my fall back server.

You need to format the internal SSD/HDD from within ROCK. Any external drives must be exFAT NOT NFS

This is great! It’s really helpful to understand how different people have deployed, and what is working and isn’t working. Thanks!

Hello Blake, and welcome to the community forum.

Like a lot of folks I decided to go with the dedicated music server, NUC8I7BEH/Rock. That decision was made during the trial in 2019 along with the lifetime subscription.

I started with Roon running on a Windows 7 desktop with a wi-fi connection. It worked well with only occasional drops or issues with windows OS but that was still too many for me. Built the NUC/Rock server and had our older house wired for Ethernet.

Roon is the primary source of musical entertainment in my home and I want it available 24/7 with zero downtime. Have Roon Ready speaker systems throughout for whole house music, or different music in every room, and the Living Room entertainment system is now built around Roon as the music source. It’s 100% reliable as long as internet is available.

If you decide to build a NUC go for the highest base processor frequency single core speed available for the best performance. That is better for Roon than more cores/threads with lower single core performance.

The NUC originally had 8gb ram, Samsung 970 m.2 for os/database and 1TB SATA drive for internal storage. When the time came for more internal storage the 1tb ssd was upgraded to 4tb and while I had the NUC open I also decided to upgrade the ram to 32 gb. No issues with 8GB but I had the 2x16gb kit and the box was open so in it went.

Hope you stick with Roon and good luck on your choices.

Depends on the library size. But, 8 is a good starting point, imho. Especially for your listed track count at ~53k. Keep in mind, total tracks includes streaming source tracks plus any local files.

That depends on the OS being used. If ROCK, then yes, as the OS disk cannot be used for other functions. If a different OS, then a larger hard drive can be both the OS and music storage.

ROCK is officially supported on only the listed Intel NUC hardware, none of which is an i9. If you are going to use different hardware I’d suggest using a Linux distro.

Does ROCK support docker or something similar

Nope, Docker and/or VM are not supported by Roon. You can use them but you would be Tinkering and that is where you would ask fellow users for support.

Store on the roon server and export music

Keep a copy of the music local to the Core. I keep the music on a NAS and then copy/sync to an external drive on a ROCK based NUC.

Thanks to everyone for your input and guidance. Here’s where I landed.

I had a NUC10i7FNH being used as a docker hosting system. I had been wanting an excuse to buy a proper server with redundant components (power, drives, etc) to move to.

I also took a bit of additional advice from @Rugby . The Roon won’t be the music origin; I’ll continue hosting music on my NAS device (so it’s all redundant), and then sync music to the Roon. That way Roon has a local up to date copy on fast media, but I have multiple copies of my music and can be back online quickly in the event of a hardware failure.

Now just waiting for my server to show up

One change from the above is that I ended up with Roon server AND lidarr running on the same machine, inside containers. So I’m running a few containers inside a VM on a dedicated music NUC. This allows Roon to recognize changes made by lidarr more quickly, and also simplifies music sync (now it’s only one way as opposed to bi-directional).

Something that has been surprising to me is how much better the Roon experience is on faster hard disks. I expected it to be more reliable, but it’s also just a dramatically better UX. Moving from spinning disks accessed via NFS to dedicated NVME+SSD has made the Roon experience even more awesome. Which I didn’t think was possible.

I really appreciate the community helping guide me. THANK YOU!