Been using ROON for a while now for my mostly FLAC with some 320kbps MP3 music collection mixed with Tidal subscription. The FLAC/MP3 collection has always been on my DS720+ NAS and ROON has always worked from an old i5 laptop. Never tried running Roon from the NAS itself because most seem to suggest it wont work well but I got bored today and thought I’d give it a go. The NAS is Synology DS720+ with 12GB of drives (no SSD cache) Intel Celeron J4125 and 2gb of ram. Sounds like it should have some issues. Here’s how it went:

Fine, totally fine. Tried streaming 4 different FLAC files to 4 different receivers. CPU didn’t go above 20%, RAM was at 80% but no slow down in functionality. No skipping or pausing. Tried the same with 320kbps MP3s still the same. Tried adding a tidal stream on a different receiver, combining receivers and I cant get it to have any issues. (Not that I want any!)

The test run was much more intensive than any listening I would normally do. I’d normally only have one stream of music going to either 1, 2 or 3 receivers so I guess it should run OK?

The NAS has only just updated to DSM7.1 too so is also busy updating my photo library and as I’ve only just installed Roon on it it’s also indexing the Roon library in the background.

…and also wondering if anyone has any ideas on how I can really stress test the set up so I can work out the limits. Might try a stream to Roon core at the same time, see if that breaks it.

mine is the same plus it’s running LMS in a docker and also has 4 security cameras running in continuous recording without any issues, it barely breaks a sweat.

Something else going on with media indexing and my tidal stream is a little skippy. Could be Roon building it’s library could be DSM7.1 getting settled in. The app on the phone seems to hang a little when searching my library.

Hopefully thatll calm down when everything is bedded in.

I just got mine 3 days ago

DSM7.1 too so is also busy updating my photo library and as I’ve only just installed Roon on it it’s also indexing the Roon library in the background.

now really wow, I did not imagine it could handle that load

…and also wondering if anyone has any ideas on how I can really stress test the set up so I can work out the limits.

Hopefully thatll calm down when everything is bedded in.

Hopefully, but I admire youre courage. You have a lot going on. I only have 1 pool with 2 users, 1 shared folder (docs backup over smb) and 1 for Mac mini time machine (manually controlled). And 1 Sync folder with Synology Drive for the working documents (I do pause and resume only when I work).

Edit: I forgot 1 more user with a folder, roon backup

so I guess it should run OK?

oh… your second post… good luck. Yup, give it some time.

So, update. Weird that it worked so well for an hour or so.

After that it really struggled. RAN usage was stuck at a constant 80% even after Room had finished indexing.

I’ve put an 8gb sodimm module in (I know the processor can’t use it all) and now it’s back to running super smooth.

Nothing I throw at it is causing issues. RAM usage now down at between 20-30%.

Can’t get arc to connect though. Looks like this is going to be a whole host of fun.

how are you connecting Arc?
Tailscale is a good option and you won’t have to use quickconnect.

If you are using open port i think you might also have to open the port on the NAS.

Looks like this is going to be a whole host of fun.

True. Thanks for sharing

Something else going on with media indexing and my tidal stream is a little skippy. Could be Roon building it’s library could be DSM7.1 getting settled in. The app on the phone seems to hang a little when searching my library.

I may cite Roon help center:

To get a faster, more reliable Roon experience, we strongly recommend moving away from networked file systems in favor of local storage. For a fully turnkey Roon Core with space for internal storage, check out Nucleus by Roon Labs . Roon Server ...

My Roon database lives on a small external SSD which makes everything a little snappier.

How big (# of tracks) is your library? This is usually the limiting factor for a less capable CPU and Ram setup.

25k tracks. Everything still very snappy now the ram has been upgraded.

yes. The Celeron J4125 is a great CPU. It has the same performance as Skylake’s core-i5. But it is marginalized.

Same here on an Asustor nas with a similar cpu. And I wrote a post about it just like you did. It works perfectly well.

Hello, good people of Roon Forum!
I have read many positive reviews about Roon and am thinking of trying it.
Especially now, when my D&D 8C powered networked speakers officially begin supporting Roon.
I am considering installing Roon server on my Synology DiskStation DS920+, where my music is.
I have upgraded its RAM to 8GB and have two SSDs as a cache for 4 HDDs.
I may repurpose one SSD for the Roon install or use a USB dongle attached to the DS920+.
I realize Roon Labs doesn’t recommend using Synology boxes if their CPUs are Celerons, which is precisely what the DS920+ has.
Still, many people report that they have done that, and their setup works well.
So I wondered if you could provide the information on which software version I need to install and where to get it from.
And are there any guides published on how exactly I should do it?
Your help would be greatly appreciated, folks!

It does not have the same performance, certainly for roon where single thread performance is the key metric. Is scores between 60 and 70 percent of a skylake i5. 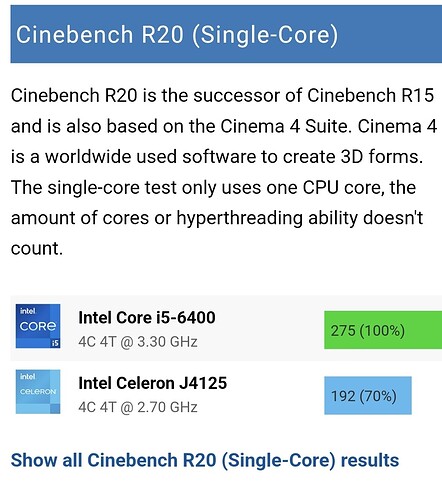 I’ve been using Roon on DS920+ for about 1.5 months with no issues. However I simply play the music as it is with the occassional bit depth conversion and sample rate conversion when needed but no other DSP so it doesn’t require a lot from the CPU. RAM usage on the other hand is sometimes 55-60% while it’s around 20% without Roon.

I have heard people say that using hard drives for streaming music increases the wear and tear, I don’t know how much truth there is to this, especially since I’ve disabled HDD hibernation, but I still decided to buy a couple of 500GB NVMe SSDs (1 for redundancy) and install that into the Synology. Now I’ve got my library and the database there which leads to a smoother experience.

Hello,
I installed ROON on a DS420+. expanded the RAM to 10GB, added an M.2 cache and only run SSDs instead of HDDs.

3000 albums, Flac, 24Bit and DSD. Multiroom and in the DSP the sampling rate conversion.

Everything stable and without problems.

Before I had HDD’s and an isolated core. I wanted to reduce my equipment pool and schedule the activity. With the HDDs, ROON was not so smooth in places and I was too impatient (due to the standby).

I didn’t notice any changes in the sound in any setup.

I admit it’s inferior to the 6400. However, the Core i5’s 6400T and Celeron J4125 should score close. In other words, what I want to say here is that the expression “core i3 or higher” means that we don’t really know the required performance. As a matter of fact, my his QNAP with celeron J4125 was running his Roon smoothly.

Did a stress test on the system with:

Still had 2-3 times processing speed on the most stressed endpoints with a processor load of 50-60%
No dropouts, audible distortions or limitations for other jobs on the 720+. (Video processing excluded,
No DSD conversion)

I don’t know why this processor handles the challenge so well, my NUC10 i7 struggled to do the same.