@support,
I’m setting up a new ROCK for someone in the industry, but I’m having a strange issue. When the ROCK has no library, it runs fine. After pointing it to my NAS, it will run for quite a while then Roon Server says not running and it will restart Roon Server.

How can I tell if this is a NUC hardware problem or Roon Server issue?

Is it getting hot? Fan running? When importing a library audio analysis puts a heavy load on the NUC or any other roon server cpu for that matter. Try reducing the number of cores used or turn off audio analysis to see if that helps.

you have codecs installed? 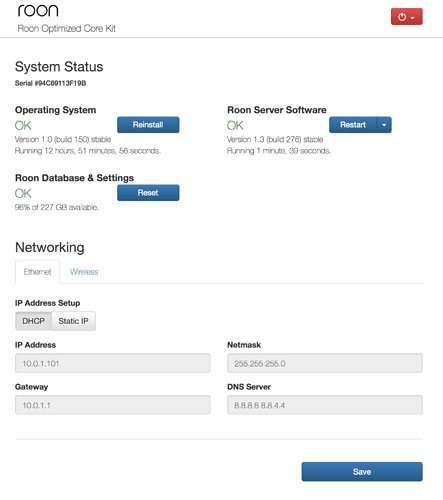 After pointing it to my NAS, it will run for quite a while then Roon Server says not running and it will restart Roon Server.

If you PM me the email address associated with the Roon install, I can enable some diagnostics and take a look at what’s going on here Chris.

It’s not getting hot, but the fan is running. The library is a little over 300,000 tracks.

Same NUC as I have running my Roon install that has been working since ROCK was released. I’ll PM you.

3 posts were split to a new topic: When trying to access the Web UI for ROCK I get the following error: “Failed to load device state (status: 0). Please refresh.”