My issue is that the Dacmagic shows the file coming through as native DSD 512, plays and sounds fine, but Roon shows it as being converted to PCM.

Same with MQA files which are also supported by the Dacmagic.

I see no mention of the Dacmagic 200 in Roon audio settings.

There are no DSD conversion options showing for the CXNv2.

Sorry if this has been covered already but I am scratching my head. Thanks all.

There won’t be any mention of the DacMagic in Roon because digital coax is not a two-way connection - Roon relies on getting info from the endpoint. In this case, your CXNv2 is the endpoint - in fact, even the CXNv2 doesn’t know that you’re connected to a DacMagic200.

The DacMagic, according to the spec sheet, also only supports up to DSD64 over DoP via digital coax - DSD512 is supported via USB:

Why it’s showing DSD512 on the DAC, I don’t know - I see nothing in the CXNv2 or DacMagic manual to suggest any upsampling, but I’ve only scanned. There does seem to be a ‘Roon DSD’ handling option in the CXNv2 settings though, which will set the digital outputs to either PCM or DoP.

Cambridge Audio Dacmagic 200, which does support native DSD up 512

It does, but only through usb:

I should add, it appears the files are being delivered to my preamp as native, but because Roon doesn’t know the Dacmagic is there it is assuming that the upsampling and conversion is happening. I hope this is the case.

If my memory of previous threads isn’t faulty, the CXN always upsamples (and tells Roon it’s doing it) for it’s internal DAC, but passes through the original sample rate (and format - I think) on the digital outputs. Roon has no way of knowing if you are using the analogue or digital outputs.

I don’t recall any reference to a ‘Roon DSD handling option in the CXNv2 settings’ though - a later firmware update maybe?

It’d be really helpful if you shared a screenshot of the signal path.

This definitely appears to be the case. My eyes and ears tell me the native file is coming through. The sound difference is obvious. There is no DSD handling option in the CXNv2 because it converts everything to PCM and upsamples everything to 386 Hz. This is what always shows in the Roon signal path (see attached). I have also attached an image of the Dacmagic showing the actual MQA file as passing through. 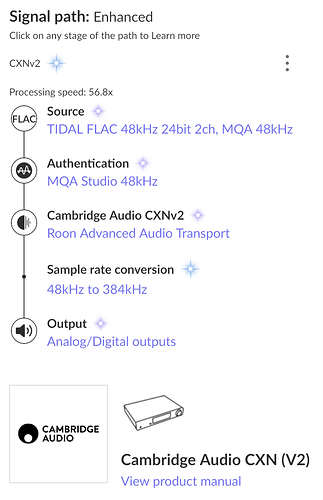 You are correct Ben. It was a DSD 512 file but the Dacmagic was showing only 64. Since the CXNv2 does not seem to have a USB out to go to the USB in on the Dacmagic that is the current limit. I think your explanation fits my theory, however, in that Roon has no way of knowing the true endpoint.

That is true, been others posts like this for this device. Roon can only feedback on the internal DAC and assumes your using it hence in that image it shows it upsamplig which it does by default. External DAC bypasses the internal upsampling.

What’s interesting with the images you posted is that the Dacmagic has received MQA signalling and the original sample rate, i.e., MQA 48 kHz.

Surely, this implies that the S/PDIF output of the CXN bypasses the internal DAC, and therefore any upsampling.

Can you show screenshots for DSD?

That is the case , The CXN will report back to Roon what it is doing in the DAC/Analogue outputs hence the 48=>384 up-sample this is standard in CA DAC’s. We have seen many instances of that here. All CA DAC’s have done this for years back to the original DAC Magic 100.

The CXN’s Coax and Optical Outputs are NOT adjusted in any way , what goes in comes out. So no up-sampling.even though Roon reports it as that signal will be fed to the DAC as well, even if not output to analogue.

The USB ports on the CXN one front and 2 Back are not outputs just ports for USB Drives, the WiFI Dongle (If you use it) and a Bluetooth Dongle (an Optional addition).

So your input is reaching the DAC Magic untouched and hence via Coax is limited to DSD 64 .as is shown in the spec

Have you tried a direct USB output from the NUC to the DAC Magic USB in , that should honour whatever DSD level you are at up to 512 , the DAC Magic limit.

Just get yourself a raspberry pi 4 and take the CXN v2 out of the equitation.

It is pretty much as everyone has pointed out. The Diane Panton album is DSD 128 and comes through at 64.
I think the idea of going directly from the NUC is a good one. I will just have to relocate the NUC across the room via ethernet cable. 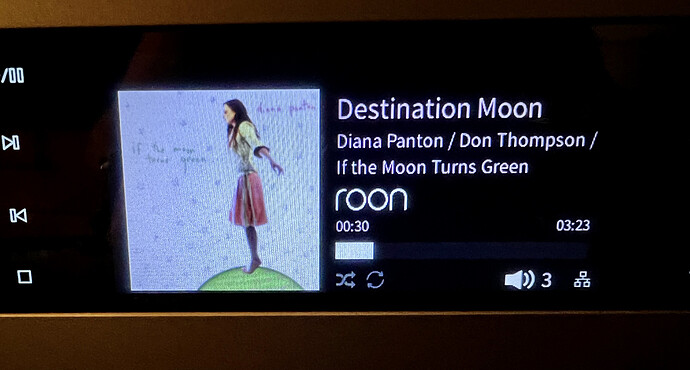 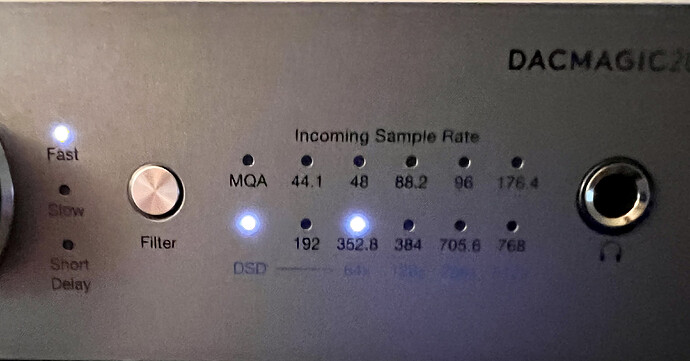 Hi Mike,
It was fairly simple to relocate the NUC over to the audio system and you are correct: via USB direct to the NUC, the DSD files come through native and Roon reports that using the Dacmagic as a separate device. This is a much better solution as I still have the CXNv2 set up as an airplay device as part of a whole house group.
As usual, thanks everyone for your expertise. One of the many reasons a lifetime membership was a good investment for me.

Thanks but I have a Raspberry Pi and Airplay 2 has been a PITA when it comes to grouping and syncing with my 4 other zones. The CXNv2 works seamlessly.