Roon skips some tracks and then finally plays one

Hello @Peter_Galvin1, my apologies for the continued frustration here. I’d still like to collect a timestamp (the date and time you encounter the issue) so we can compare diagnostics again. Also, have you tried wiring the core directly to the router, bypassing the switch? Perhaps simplifying the setup will help.

As of 1.8, I no longer seem to have this problem!
Early days still, but 1.8 hasn’t had any of the issues I’ve reported before:
Problems accessing Tidal over time, asking for login retry but that not working, having to restart roon to get it working
Tracks taking a long time to load
Tracks being skipped.

So far 1.8 is fast and reliable! Very happy…

Still going well. Seems like the problems that have been haunting me have been solved!

Unfortunately spoke too soon.
The problem is decreased, but still happens.
Sometimes the problem occurs when say choosing a new album to play, while other times it happens when I pause playback for a while and then try to continue it.
I don’t recall it happening recently once playback has started. That is, if I’m playing an album, playlist, etc, the next tracks play appropriately (unless I pause).
Mostly I listen to my own tracks, so this is local tracks on my system.
If I press “play” somewhere between 1 and 50 times, the item I want to play then starts playing.
If an album, I’ll press play, and either all tracks will skip with the error or say a bunch will skip and then roon will start playing the next one. If I just keep pressing play, eventually the first track will start playing and playback will continue without problem. Restarting roon also usually solves the problem but not always.

Separately I still occasionally have the problem when trying to play back from Tidal that I get the tracks unavailable error. The only fix for this seems to be restarting roon.

Still having this problem. And others report similar problems in other threads.
Anyone at Roon looking into it?
Here is my summary from another thread:
I believe Roon has fundamental issues on macs. Perhaps only with large libraries? Would be interesting to hear from folks using a mac as their core with a large library who don’t have problems.
I’ve had problems for years, and they are still not solved.
I’ve tried many things:
Changing Macs
Trying wifi only
Trying ethernet only (my current setup)
Changing network routers
Changing network switches
Changing roon endpoints (currently using an OpticalRendu).
Symptoms remain the same:
After using Roon for a while (hours in a given day, or leaving it running overnight), roon will start not being able to connect to tidal and / or qobuz, and / or will have trouble loading and playing tracks in my library. I’ll tell it to play an album. It will skip through all the tracks (no error messages). I’ll try again, and it will skip all or most, and start playing one. I’ll try again it will skip all, or skip some and start playing a different one.
The only solution I’ve found is to restart roon. Which lasts a while and then the problem occurs again.
Here is a dropbox link to a screen recording showing the problem happening:

After using Roon for a while (hours in a given day, or leaving it running overnight), roon will start not being able to connect to tidal and / or qobuz, and / or will have trouble loading and playing tracks in my library

Make sure you have logged out of Tidal and Qobuz from all non-Roon apps in all devices in the whole family.

Interesting! Will give it a try…

@dylan This sounds very similar to what’s happening to me right now. Maybe run his diagnostics and see if the problems match.

Having same issue here - different Cores/routers/switches/wired/wifi/endpoints/local/Tidal/Quboz. No other network issues at all. gigabit fiber.

Not logged in to tidal or qobuz anywhere as far as I know.
Still having the skipping problem.

I’ve occasionally had this problem as well. It hasn’t happened (to me) in a while (several months), but something similar to what you describe definitely used to happen to me, and it felt inexplicable/random when it hit…

My Roon core runs on a Windows 10 desktop, though, so if the problems are similar/related, it wasn’t/isn’t unique to Mac machines.

When Roon is in this state where it’s skipping, what’s the resource usage looking like on the Mac?

Perhaps only with large libraries?

How many tracks total do you have?

I have a monster imac. 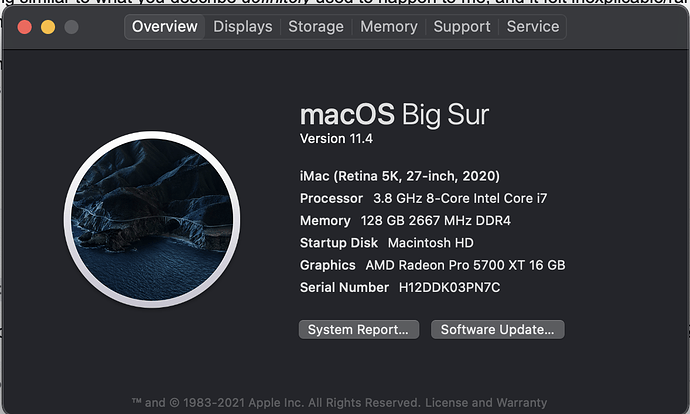 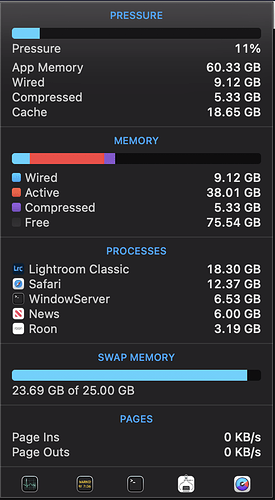 Also, just has a qobuz skip. Playing Miranda Lambert The Weight of These Wings
Track 7 “Getaway Driver” played about 1/2 way through at 9:18am and then the next track “Vice” started.
Not sure what else I can provide to help you debug this. Running 1.8 (795).

I’ve had this problem on an Ubuntu (both desktop i7 and NUC), Mac and Windows servers. In fact, that’s a testament to the troubleshooting I’ve done. One endpoint/grouped endpoints in sync. Local/Qobuz/Tidal. Happens in all cases. Sometimes, it’s really bad. Other times, it takes hours to happen. Gigabit FIOS fiber connection. No bandwidth issues or wifi problems I can detect.

Perhaps roon is stable-ish on Windows but not other platforms…

Thanks, but as I said, it’s the same experience on all three platforms.

Ah right. I suppose the question then is, why do you, I, and presumably some other folks have this problem but not the vast majority…

I’m willing to accept that it’s something with my network, but what? I have no other problems with these devices and I also run LMS/Squeezelite on each rPi.

It really does not seem like network to me. As you say I’ve tested all sorts of things, with roon and outside of roon. Tidal, qobuz work fine when roon is saying there is a network problem and it can’t get tidal and qobuz info.
Roon skips playing my local files, while for example I can play the same tracks to the same output devices via itunes.
I believe it’s resource management within roon. Frequently restarting roon solves the problem. If I had a problem with my network, restarting an app would not clear the problem the app was experiencing with the network.
But, I’ve had this problem for years, and roon has yet to diagnose it, let alone solve it.
So roon is the product I put up with because it has the best features, but hate because it’s so frustrating to use.