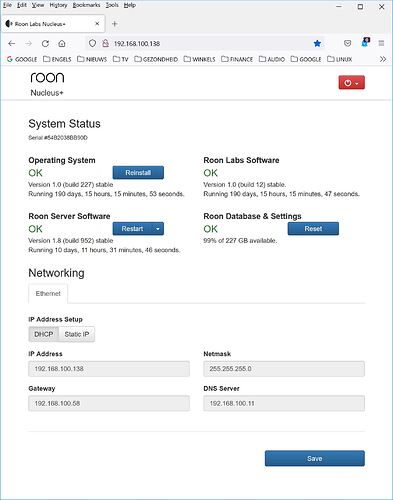 What’s that saying, something about ‘Pride comes before a fall’…?

My ROCK uptime stats are almost identical to yours but there have been some very strange instability reports in the recent weeks since the last update (952), so fingers crossed.

Had no issues since my Ubuntu 20.04 LTS Core came online, it just works.
Only OS security update threaten my Core uptime.
I do not care about uptime, it only means that the longer it has run, the more likely it is to be affected by security issues.
Anyway rock solid on Ubuntu…

Given that this is driven by a memory leak, size of available memory and size of a library will have an impact (nothing to do with Ubuntu etc as there are people on Ubuntu also being affected by this issue)

I have a Nuc 10 running Roon that was stable for a year until this release. It has 16GB RAM and a 75k library, and it lasts about 12 hours and then the Roon app restarts. But the Core has also rebooted twice in 48 hours.

It has been mentioned by Danny before that if Roon runs out of memory it becomes unstable and likely causes a reboot.

“Given that this is driven by a memory leak”; not given, assumed

The OP has not given any hint or info on why , he is just happy with Roon stability, as i am

Look at the number of posts about this issue across the forums and @spockfish has said it is a memory leak. I trust his views on this given the work he does.

You are probably right that the OP meant that.
Just for kicks and giggles, my Roon Core total memory used and available the last 30 days.

It shows that there is an issue, you can see the impact of the Core updates

I am quite aware of the reports of all those users who currently experience memory problems with Roon. Not so long ago, before Roon was ported to .NET on Linux, I have been affected by leaking memory, too. But evidently not all users are affected at this moment. It seems not to be a general problem, but one that only manifests under certain conditions. My own experience is as @PeterD reports—a totally stable Roon core running on Ubuntu 22.04 server.

I don’t experience the search problems reported by many, either. After the release of build 952 I have had a couple of times my Mac Remote freeze, but during the last days not even that. Let’s just hope that Roon’s QA team can replicate the memory problems and push for this to be corrected in a new build.

Andreas that is interesting given the number of complaints. My Rock Roon app restarts every 12 hours like clockwork, never having done so before.

So it will be fun to see if we find out what the cause of this is fixed. Hopefully it will be quick.

I’ve seen an interesting report by some guy who saw the memory usage of his core go steadily up while no active output device remained selected. That is, at night he switched off his DAC, and no output device remained active. After reconnecting the DAC, memory usage increase stopped… That’s something I would never see, as my two USB-connected DACs stay always on and connected. So there might be usage patterns which decide if the problem manifests itself for a given user.

Other users report their remotes to crash when bringing them back from minimization on the desktop. That’s another thing I wouldn’t experience, as I never minimize the Roon Remote on my iMac… it lives on its virtual screen.

Yes I have had the windows app crash everytime I have left it open, my Android app crash half a dozen times and both my Core app restarts and the Linux Rock server reboot 3 times.

It’s difficult to pin it down. I didn’t play music and it crashed, I played music for 12 hours with the apps closed and it crashed.

Strangely my normally least reliable device, my 11" iPad pro has been the one stand out device so far, as that used to crash all time before this release

Much better you’d stayed one more week on Madeira…

Regarding the “so called” memory leaks: If there is memory available why not use it all. Look closely at this piece about the malloc & calloc functions… As far as I know Microsoft does the same thing with SQL and Exchange.

Before learning the difference between malloc and calloc let's learn- What is Dynamic Memory Allocation? Dynamic memory allocation is a process of allocating memory at run time. There are four library

(I had 11 nights and almost a 12th, just to give Roon a chance to fix everything)

I thought to myself… Don’t update… Then I did it anyway as I never get the issues suffered by other poor souls (excluding Sonos issues).

Well hubris comes back to haunt us sometimes

Have a look here:

Search function could not be used due to using method which is not available in older .NET Framework platform in Windows 7-8.1 / Windows 10 TH1-TH2.

Regarding the “so called” memory leaks: If there is memory available why not use it all. Look closely at this piece about the malloc & calloc functions… As far as I know Microsoft does the same thing with SQL and Exchange.

There is nothing ‘so called’ about it: when the kernel intervenes (by killing the offending process) because all available memory is being used by Roon and the system is running out of swap space as well it is simple: a memory leak. And a big one I might add as well. On my Linux NUC with 16 GB I can play music for about 20 minutes before this happens.

Sorry Harry, don’t know what your problem is. Doesn’t happen with me. Running the “black box” as the core and my own developed endpoint with Linux on a 4 core Qubox. Running for ever…! 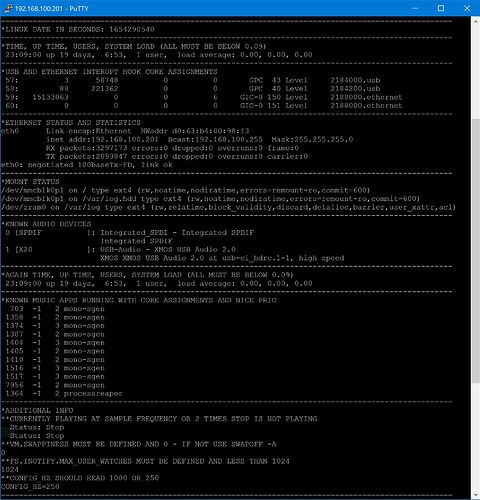 Am I looking at Roon server?

Because… I see ‘mono-sgen’ while my Roon server runs with .NET.